We lost one of our most courageous son on 8 November 2021; CDS Bipin Rawat

As of January 2019, he was 63 years old and served as India’s first Chief of Defense Staff since the country gained independence in 1947. There are three branches of the military reporting to this position, which was formed with integration in mind.

Additionally, General Rawat, a former Army Chief, has been appointed as the newly formed Department of Military Affairs head.

Many previous military leaders have been upset by the loss of the Mi-17, a two-engine helicopter that was employed for VIP transportation.

India’s first Chief of Defence Staff (CDS) was appointed on January 1, 2020, by General Bipin Rawat, who hailed from a long line of military families and was one of the most decorated fighters of his time. Rawat was appointed to the position by Prime Minister Narendra Modi.

Remember that he had a high-ranking post among the four-star military officials directing the armed forces while he served as Chief of Staff (CDS). He was in charge of the Defense Department, taking over responsibilities that had previously been the responsibility of the Department of Defense.

In addition, he acted as the Minister of Defense’s chief military counsellor on all subjects about the armed forces throughout his tenure in the position. 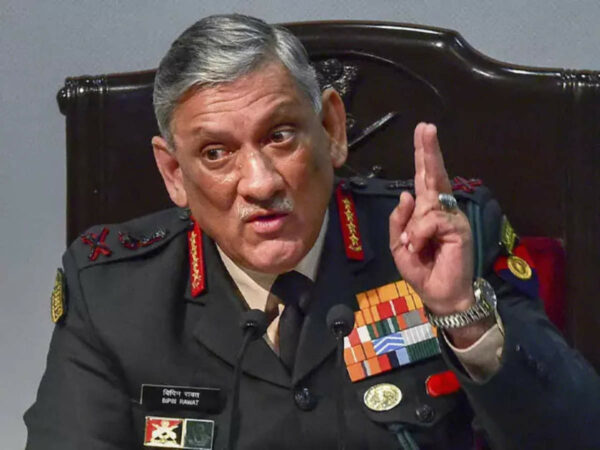 Rawat, his wife Madhulika, and several members of his staff, including Brig L S Lidder, his senior-most staff officer, died in a helicopter crash near Coonoor on Wednesday afternoon. The cause of the disaster is yet unknown.

Rawat, who served as the 27th Chief of Staff of the Armed Forces from December 31, 2016, to December 31, 2019, was a witty and straight-talking general, which helped him prepare the Army for future battles.

Another one of his changes was the establishment of Integrated Battle Groups, which functioned similarly to more prominent brigades in battle formations but were more agile and self-sufficient.

In December 1978, he was commissioned into the Eleven Gorkha Rifles Fifth Battalion after winning a Sword of Honour for graduating from the Indian Military Academy as the highest student in his class in the previous year.

His father, Lt Gen Laxman Singh Rawat, resigned as the Army’s Deputy Chief and commanded this Battalion until he died in 2011. His grandpa and great-grandfather served in the military, as did his great-great-grandfather.

India’s defence minister, Rajnath Singh, released a statement announcing his death hours after the accident scene in Tamil Nadu was discovered. The country’s top officials came and transferred the injured to a nearby hospital. At the bottom of the hill, behind the plane’s burned wreckage, rescue workers could be seen fighting a roaring blaze.

A period in which India’s military is confronted with difficulties on two of its borders, in addition to the repercussions of a deteriorating economy, the loss of General Rawat, who served as the country’s chief of defence staff, is disastrous.

Amid rising tensions between India and Pakistan, hundreds of more troops have been stationed in high-altitude Himalayan locations for a second winter after deadly encounters with Chinese forces last year.

Is it possible to learn more about the actual location of the CDS Bipin Rawat’s incident?

When the Russian-made Mi-17V5 military helicopter took off from a base in Sulur, India, it was slated to pay a visit to the Defense Services Staff College in Wellington, less than 100 kilometres (62 miles) away (DSSC).

General Rawat and his wife were joined on board by seven additional military members and five crew members, in addition to the general.

One of the lone survivors of the jet crash was a captain who worked for the Defense Security Service (DSSC).

According to accounts from local media, one eyewitness reported hearing heavily distorted sounds just before the helicopter plummeted to the ground.

Krishnaswamy reports that a witness told The News Minute that “I witnessed the helicopter flying down… it impacted one tree and was on fire,” according to Krishnaswamy. “When I got close enough, a plume of smoke greeted me. My house was completely consumed by fire in a couple of minutes.”

Rescue efforts were hampered by the steepness of the accident site and the lush forest that surrounded it.

Because of his service in the Indian Army, Gen. Rawat, born on March 16, 1958, in Uttarakhand, was recognized as a tough soldier and an inspiring leader. He passed away on March 16, 2018. In recent months, the general has been hard at work modernizing the military’s infrastructure. 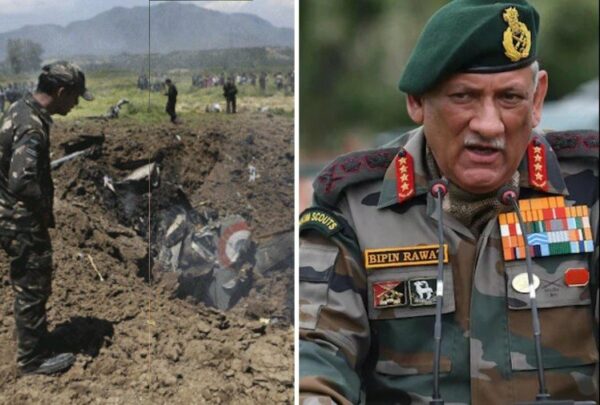 India’s ageing air force aircraft are often criticized for a high number of accidents even though its Mi-17V5 combat helicopter is one of the most technologically sophisticated combat helicopters in the world.

According to former army commander J J Singh, who himself has flown in a helicopter under challenging situations, helicopters are “safe and proven.”

Last year, seven military personnel were killed in a crash in Arunachal Pradesh in northern India’s northeastern region. In the course of a training operation, the helicopter was in flight.

Another of the helicopters had crashed during a military drill in the northern state of Uttarakhand a year before this one did so this time. There were no deaths in this incident.

Who is the person who will be accused?

While the incident resulted in a significant loss for the nation, which is ultimately to blame that incidents such as aircraft accidents are becoming more common in India?

It is now commemorating its 28th year of existence. It has the most helicopters among the three military services, with surveillance and observation helicopters accounting for most of its inventory (approximately 200 Chetak and Cheetah helicopters).

This fleet, which has been in operation for more than 40 years, is in desperate need of being replaced. These helicopters have been a mainstay of the military for the last four decades, particularly among the Army Aviation Corps (which has the most extensive inventory).

The Cheetah helicopter now serves as the backbone of military operations in these areas. Still, the reality is that they are outdated and the armed forces deserve better, especially given that we have the third-largest stand-in Army in the world. 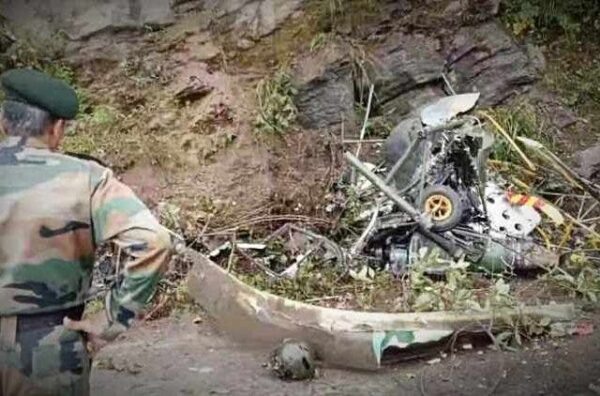 The previous experiment for their replacement was done in 2005-2006, and the results were positive. The Bell-407 from Bell Company and the AS550 C3 Fennec from Eurocopter also participated. Because its engines were not authorized, Russia’s KA-226T aircraft did not qualify for inclusion in the technical evaluation.

A fresh bid for the procurement of 197 light observation helicopters for the military and air force was made public in July 2008, and the government accepted the deal (137 and 60, respectively).

Since then, the trial evaluation has been finished, and the results are in. This time around, the Eurocopter Fennec and the Russian Kamov-226T helicopters were the top contenders for the contract.

It was determined that the AugustaWestland AW-119 from the United Kingdom and Italy was excluded from the competition due to a misprint in the name of its engine. Nonetheless, as previously indicated, this significant initiative has been put on indefinite hold.

Unfortunately, this will have a significant effect on operations in high-altitude environments. It is becoming more difficult to get replacement components for the helicopters still in service, and maintaining them is becoming a nuisance. Several military leaders have already expressed their dissatisfaction with HAL’s current state of things.

Given that it is little more than a Cheetah with a more powerful engine and the essential technology remaining the same, the “Cheetal Helicopter” given by HAL for the Army and air force is a short-term solution that cannot be considered acceptable.

This implies that the Hindustan Aeronautics Limited (HAL) has temporarily suspended the Chetak/Cheetah helicopter production and will instead focus on developing the “Chetal” helicopter to replace the holes in its fleet during this period.

A long-term project to develop a 3-ton Light Utility Helicopter (LUH) under the 3-ton light observation category is underway, with the helicopter projected to be operational by 2016.

Although it is impossible to predict whether or not HAL will make the manufacturing schedule for the aircraft, the design freeze stage has been reached. In terms of operations and maintenance, there are various challenges with the ALH, especially at high altitude, with the Army bearing the brunt of these consequences as a result of its large fleet of helicopters (60-70 in number), which is growing by the year and is becoming more complex to maintain.

As part of its commitment to RUDRA (armed ALH), HAL is also required to complete the construction and induction of six to seven units for the Indian Army (installation has already started), as well as to field the Light Combat Helicopter (LCH), which is capable of flying at high altitudes, by 2014. The LUH looks to be a long shot in the present political climate.

The Chetak and Cheetah fleets are already out of date and must be replaced before they begin to fall from the sky. Thus there is no other option left for the United States. Their ability to affect the situation will be severely limited if they do not have access to this vital equipment for mountain operations to do so.

According to some government and military sources, more ALHs may be engaged for reconnaissance and surveillance to increase the effectiveness of the military. Even though it may help some entrenched interests in the short term, this should be rejected out of hand in the long run.

It is not professional nor operationally practicable to proceed in this manner. As a result of the recent Chinese push into the Depsang Valley, which is located at the height of 16,000 feet, it is imperative that the region modernizes and changes.

See also  Coal is black, and so would India be with the approaching "blackout" and power crisis
Tags
#bipinrawat #indianarmy

Is Cryptocurrency The Right Investment Path for Me?