What is Policy Bazaar all about?
Insurance policy agents have known to have scammed a lot of men when there was no internet but even with the advent of Internet a lot of fake and unclear insurance policies have been surfaced on the internet as well. It was a very confusing and unclear area of business. While insurance policies were necessary and served as an advantage in almost all areas of like, be it vehicle insurance or health care or the life insurance all of them are a necessity but there never was a quality check of where the Insurance money would go, how often were the premiums need to be paid, where and how we could claim the money back and no information about which insurance policy was the best and which was better than the million different policies present out there. There was a lot of chaos, and hardly any clarity.
That is when Policy Bazaar came into picture. A one stops spot for all the information about policies under the sun. The Policy bazaar site allows you to compare between the different range of policies that are present in and come up with the best suited and well-tailored policy for your needs and as per your convenience.
How Policy Bazaar came into existence?
In the June of 2008 in the city of Gurugram in Harayana, three people came together Yashish Dahiya, Alok Bansal and Avaneesh Nirjar to bring in some transparency and clarity to the very messy and fraudulent area of Insurance management in India. As there were a lot of insurance policies in the market and no platform to know or understand and compare the different kinds of Insurance and the prices and how much commission the insurance policy formers were actually consuming. Thus started the journey of PolicyBazaar, to bring a standardisation in the Insurance market with more clarity and transparency. 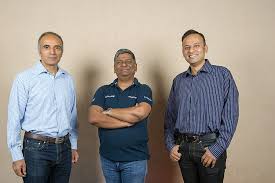 About the founder:
Yashish Dahiya is from the city of Harayana. He completed his engineering in Indian Institute of Technology, Delhi and a post graduate degree from Indian Instititute of Management, Ahmedabad which was a Master’s in Business Administration, he also had a degree from INSEAN, coming to his professional experience he worked in Bain and Co, followed by a stint in ebookers.com in the UK where he supervised the United Kingdom division and gained a lot of experience. After which he went on to found the Policy Bazaar to bring transparency in the insurance sector in India.
Alok Bhansal finished his Bachelor of Technology in Kanpur University and then a post graduate diploma in management from Indian Institute of Management, Calcutta. Coming to his work experience he worked in Voltas Limited followed by General Elecric, iGate, Global solutions, Mahindra & Mahindra, First Europa, after which he finally founded Policy Bazaar.
Avaneesh Nirjar Indian Institute of technology Kharagpur followed by an MBA in Marketing from Birla Institute of Technology in Marketing. His work experience includes Marico Industries, AT&T India, GE International Services, HEROITES, Cendant ISO, First Europa Services Ltd, followed by the founding of PolicyBazaar
Valuation and Investment:
PolicyBazaar joined the Unicorn Club by raising a total of $238 million in a recent series of funding received by Soft Bank and Is now currently being valued at $ 1 Billion. Its other investors include Edge India Ltd, True North, IDG Ventures etc.
Journey so far:
When Yashish Dahiya came to India he saw that there was a lot of mismanagement and chaos in the insurance sector of the Indian Business. He being a principled man was determined to do a service through a business through which the society is also uplifted and he is too. He is a person who wishes good for all instead of looking at personal gains. He sees benefits for both the parties in picture and he is aware that there are no short cuts in business there is no one day from where the money start flowing automatically out of the blue, he believes that is something comes easy it also goes equally easily. For a sustainable future he things hard work and patience are the only two things that can garuntee success in any place, with all these strong plinciples he started the policybazaar, a platform that allows customers to check and compare the policy prices from one company to another.
His business model is beautifully crafted in such a way that there is no money bleed when the policies are being sold on the platform so any amount of transaction does not make the company lose any money but the only investment is the infrastructure and the backend IT employees.
Finally, it was a much needed advancement in the Internet Based era where there was so much confusion about the different kinds of Insurance policies and all the related terms and conditions.
Obstacles faced and overcome
One of the problems in the Insurance Industry despite all the confusion is a lot of people depending on the traditional methods of policy and not wanting to change anything or compare their products online. And to eradicate this the company ensured on building trust with the customers also be doing the right kind of marketing by bringing Akshay Kumar as the Brand Ambassador of the company.
The Insurance Industry is always at risk from the policy changes but the founders of the company are determined to work around the new rules or policies that are going to be thrown their way and stay on top of their game. And there is always competition from the other companies that have more funding, But policy bazaar has a lot of faith in their business model and are sure wade off any competition that is going to come their way.
Expansion and future plan
There is continuous advancement happening on the technological front to make the platform more user friendly and it is diversifying into other sectors like mutual funds and are also looking at international expansion mostly to the Middle eastern region like Dubai.
Impact on the society
It has made the lives of millions convenient as a lot of Insurance deals in the Vehicle Industry get closed on the Policy bazaar site itself. It has brought in transparency and clarity into the business of Insurance policies.

This Thiel Fellow thinks he can help scooters, drones and delivery robots charge themselves with sunlight

Tastemakers raises $1.4M to sell Africa experiences to the world