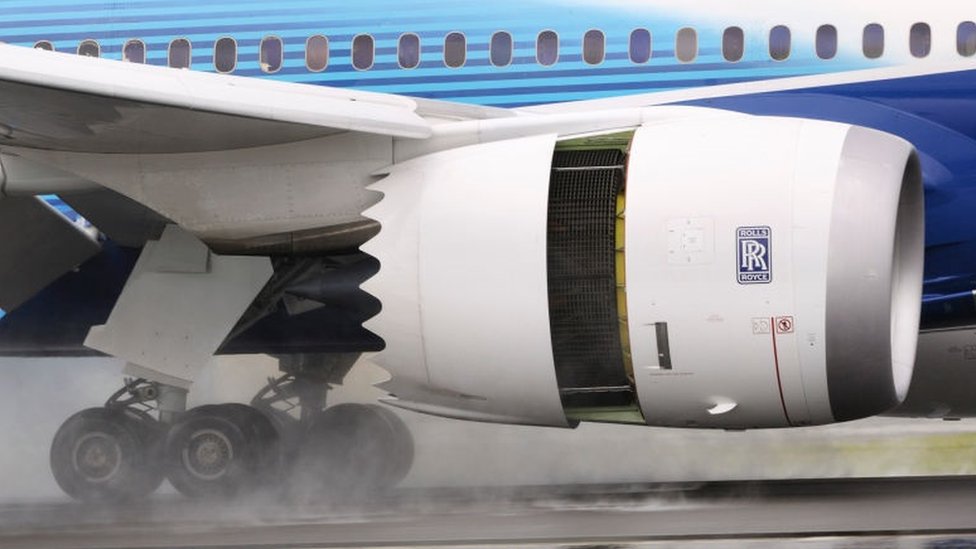 Rolls-Royce is taking a charge of £554m to cover costs related to problems with its Trent 1000 engine.

The engine, which is used on Boeing’s Dreamliner range of aircraft, has experienced problems with its turbine blades.
Airlines have been forced to take aircraft out of use while Rolls-Royce fixed the problem.
The charge contributed to a pre-tax loss for Rolls-Royce in the first half of the year of £1.26bn.
Rolls-Royce said the charge was a one-off exceptional item amounting to about 40% of the estimated expense involved.
The company said the actual cash cost of fixing the problems would be about £450m this year, £450m in 2019 and £350m in 2020. After that, costs would fall substantially, with the work complete by 2022.
Rolls was also hit by costs of reorganising the business and a loss related to the way it accounts for currency moves.
But the company said that if those costs were stripped out, the underlying business was performing well.
Underlying operating profit rose to £205m in the first half of the year, up from £141m in the same period of 2017.
“We continued to make good progress in the first half. Financial results were ahead of our expectations, with strong growth from civil aerospace and power systems, and we achieved a number of operational and technological milestones,” chief executive Warren East said.
He added that underlying profit for the year was likely to be at the upper end of the company’s forecast range.
In June, Rolls Royce announced 4,600 job cuts over the next two years as part of a major reorganisation.
The cuts were mainly to middle management and back office roles and were expected to fall largely at its base in Derby.

See also  ‘No one wants to be tested:’ Social stigmas are crippling coronavirus containment

If you are on an aircraft taxiing at Heathrow and look out of the window towards the maintenance hangars, you will see something unusual – several brand-new Boeing 787s parked up doing not much at all.
British Airways and Virgin Atlantic have been forced to ground some of their Dreamliners because of problems with Rolls-Royce engines.
They should stay on the wing without problem for several thousand hours of flight time – but the possibility that turbine blades might be wearing out means they have to be taken off and inspected every 300 hours.
This scene, parked aircraft and frustrated airlines, is replicated at airports round the world. Today Rolls-Royce made its latest estimate of how much the mess will cost to fix – £554m over the next four years.
It is an untimely gaffe from a company that is still recovering from an unhappy period that saw five successive profit warnings and is the in throes of a restructuring that will see more than 4,000 jobs go.
At the same time, it is ramping up production to cope with a surge in sales. As Warren East, the chief executive, put it this morning, the company is at a “pivotal” point. For investors, though, there was a silver lining in this morning’s half-year numbers.
Looking past the immediate problems, Mr East was able to stick to his guidance on how much cash the company will generate in the coming year. That is vital if Rolls-Royce’s jam-tomorrow promise is to become a reality, and explains why the company’s shares were, at least in early trading, almost unchanged.

Electric Vehicles This Week: Govt To Roll Out New EV Policy, Ahmedabad Municipal Body To Get 50 E-Buses, And More