Will the bill amendments give a boost to the dispute between the Central and the State Governments? The long-standing reputation; of the Aam Aadmi Party could be under massive threat from the Central Government as it looks to give overarching powers to the LG. The disruptions between BJP and AAP have got acknowledged across the world by every leading economy. Is the bill infringement of the failure of BJP in the elections this time?

WHAT ARE THE AMENDMENTS IN THE PROPOSED BILL?

The Government’s manipulative side has always been on the radar of journalists across the world. But has the contravention been a scripted show by the BJP Government? Many questions have erupted in the opposition’s mind as the elected government powers are restraining in the LG’s hands. It’s time for Centre v/s State once again in the national capital. We move forward to the outlays of the proposed bill. According to the proposed amendments, some of the noteworthy aspects of the bill are as follows-

The Government must obtain a consultation from the Lieutenant General before the implementation of any decision. What would this mean for the government-related services? Looking back at the Congress regime, they never interfered in the decisions of any state government. And the question that incurs in our mind, why should the Central Government even interfere in the state political matters?

The Central Government’s retaliation could be the correspondence of failure in the Assembly Elections this time round. While addressing the amendments in the bill, The Chief Minister of Delhi countered BJP’s approach. He asserted, “After being rejected by Delhi people (8 seats in Assembly, 0 in MCD ByPolls), BJP seeks to curtail powers drastically of elected Government through a bill in Lok Sabha. Bill is contrary to the Constitutional Bench Judgement.”

The Central Government can pave a conspiracy against the State, and another battle might emerge between them. The Chief Minister is feeling let down by the BJP regime as he feels it is a sign of betrayal to go against the constituted laws. Another significant impeachment in the bill, Government referred to in any law passed by the legislative Assembly would mean LG.

WHY SUCH JUDICIAL CONSPIRACY AGAINST THE DELHI GOVERNMENT VS CENTRE?

The Centre wants to expand the extent of say of the Lieutenant General in the political and operational matters of the National Capital. Is the decision to make amendments to the original bill a conspiracy or boon for the Government? Surprisingly, in the history of constitutional matters in India. None of the governments got questioned regarding their actions but, it has become imperative the current regime would interfere in the State confidentiality, right? Haven’t the top authorities interfered too rigorously in the State matters in the current system? From being assertive about its opinion towards the State’s economy to snatching away the judicial say of them, the Government has laid down the perfect pathway to manipulate its delegates.

‘Government of National Capital Territory of Delhi (Amendment) Bill’ was introduced by the Centre on Monday in the Lok Sabha. The overview of the bill sought to give external powers to the Lieutenant-Governor. The law will seek The LG to have more say in the various sectors of the national capital. The LG gets appointed by the President on the Centre’s advice. The conscience behind these amendments is a mystery as the current Government does not like to be in question. The conspiracy behind such a move will associate with a lot of stuff that goes behind the scenes. The Government’s arduous judgment unleashes the way the economy has handled itself over the past few years.

CAN LG BE MORE POWERFUL THAN THE ASSEMBLY?

The Government’s decision to give LG overarching powers contradicts the Supreme Court’s Judgement on July 4, 2018. The judgment stated that the LG could not interfere in every matter of the Delhi Government. The Lieutenant Governor must act on the aid and advice of the Council of Ministers. So what changed in the prolepsis of the Government? The Supreme Court Judgement reverberated actions within the Parliament where the BJP regime felt that it was going against their asserted analysis. The status of the LG of Delhi is not that of a governor…, perhaps, he remains an administrator in a limited sense, the apex court said while giving the judgment.

The conflicts began between the Centre and the State when the Government appealed against the Supreme Court Judgement. It felt that the court did not grant external powers to demoralize the current regime. When the action went against them, they did not hold their stubbornness and enforced the National Capital Territory of Delhi Bill. The overview of the bill foresees more interference from the Government indirectly, as the LG considers it to be a subsidiary of the Government. LG should not elevate to such a level where it influences the decisions of the Council of Ministers. If such a bill conspires in the Indian Constitution, then gradually, the motive behind having a State Authority will vanish.

WHY IS DELHI GOVERNMENT OPPOSING THE BILL?

The Delhi Government is opposing the bill due to the transfer of powers from the elected Government to LG. If we snatch away the freedom of expression from the Government, the outcome will be bizarre. The State Government actions should not comprehend for final reviews as it will cause a significant delay in its implementation in the Legislative Assembly. The bill seeks to add a provision in the original GNCTD Act, 1991. The amendments state that it is barring the Assembly or its committees from making rules to take up matters concerning day-to-day administration or conduct inquiries concerning administrative decisions. The amendments will have far harsh consequences, as they will go beyond the BJP v/s AAP tussle.

Making it mandatory for the States to route their files to the LG, the amendments will take away the Government’s autonomy and especially the authoritative control over policy matters. The political parties promised each other at various times not to scrape the full statehood of the State. If the amendments get enacted, then the infringement would become a political agenda across the nation. Keeping these consequences in hindsight, AAP leader Arvind Kejriwal outraged in full flow and stated that the political party strongly condemns the unconstitutional and anti-democracy move. In 1993, BJP’s then Chief Minister Madan Lal Khurana raised the issue regarding how little power the elected Government of Delhi has.

WHAT WILL EVOLVE IF THE AMENDMENTS GETS CLEARED BY PARLIAMENT?

Following the Supreme Court Judgement, the elected Government stopped routing files on political matters to the Lietenuate General before implementing any decision. But if the amendment gets cleared, the elected Government will be under immense pressure to take LG’s advice before enacting any law in the Cabinet. The assumption signifies as the 70-member Assembly, where the AAP has as many as 62 MLAs, has multiple committees examining matters ranging from riots to the environment.

Gradually, the public’s belief in the State Government will dissipate, and they would be hanging on the fringes of the LG. The State’s Government authorities know their roundabouts very well, and accordingly, they prosper to provide benefits to the public. With the current set of amendments, the Government, along with the people. Will get pressurized to enact according to the LG, and there will be no freedom of opinion. The GNCTD Act outlines the powers of the national capital to the Assembly of Council of Ministers, but no longer will the existing laws or the Supreme Court’s Judgement will have the extent of say against the current leaders’ proposition. 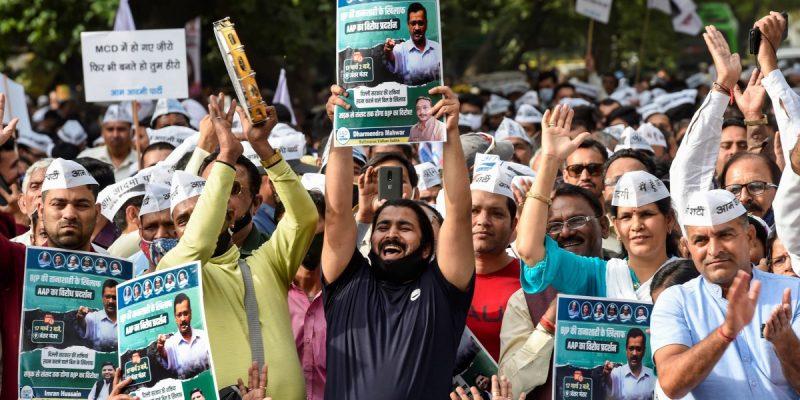 WHAT ARE THE FEARS ARISING IN THE NATIONAL CAPITAL?

From the past five to six years, AAP engaged in a constant battle with the Government regarding policy matters. A resolution on the conflict got found in the Supreme Court, and since then Aam Aadmi Party abided with the judgment of not routing its files to the LG. The Supreme Court judgment gave it a freer hand in terms of policy decisions.

Government fears arise when the Centre complies to give the coverage to the LG rather than trusting the elected Government. As we look back at the progress of Delhi’s economy under the reign of Arvind Kejriwal, we find evidence that he has done a commendable job to upsurge the economy to staggering growth. It is imperative to observe that he has brought some instrumental revolution in the scheme of things. The public has always been let down by the activities of the Central Government, and fears, that if the amendments take place as scheduled, they might face more difficulties in the times to come.

Our digital transactions have gone as high as 67 pc now: SBI Chairman

PIXEL 6 SERIES : Could be a great launch

A 7 Step Guide to increase sales in the logistics sector

Singapore is conditionally lifting its awaited travel restrictions for 2021- what does it mean for eager Indian travelers?