The Reserve Bank of India’s Consumer confidence index infuses record lows amid the repercussions of the second wave of the pandemic. Across the world, people have engendered the feeling of uncertainty about the economy and employment situation. Over the years, the consumer perceptions haven’t dipped to such astronomical figures, but the humanitarian crisis seems to have revamped the morale.

Consumer Confidence Index has been reeling a negative territory since July 2019, summing up the grim state of affairs of the Indian economy. The current situation index razed to 48.5 in May from 53.1 in March, calling it out the darkest times ever seen. While the knockdown perpetuates India’s devastating response to the outbreak, it dwells on the fact that the government, RBI, and various economic surveys depicted a woeful dilemma to the story. They affirmed that alleviated measures have got undertaken to boost up the ebbing morale.

According to RBI’s survey published recently, the current situation index weakened further to irrecuperable levels. And the predominant slump in confidence was claimed to the major factor. Millions of people lost their jobs and faced unprecedented hindrances in household incomes. It fell off so much at the time that they didn’t acquire adequate funds for consummating their necessities. The Covid-19 relief measures were only exhibited as a pipedream as the government evaded its responsibilities for upheaving the ailing condition.

It revokes the surreal value of mental health and optimism, which is inevitable for perpetuating higher efficiency and performance. However, the survey contradicts the very statement as it claims the lowest figures since 2012. Indians have never felt shattered to the precarious intensity revolving in their minds today. The present is dwindling, the future is uncertain, and there’s nowhere to the fringe.

The survey was a specimen of India’s consumer precis, and it manifested a sluggish aggregate demand. The overview got conducted through telephonic interviews from April 29 to May 13, evaluating the impact of the pandemic on the three parameters. The perceptions and expectations of 5,258 households got recorded during the process.

Does the Consumer Confidence Index trajectory reflect on the limited opportunities? Is there a secretive vendetta? 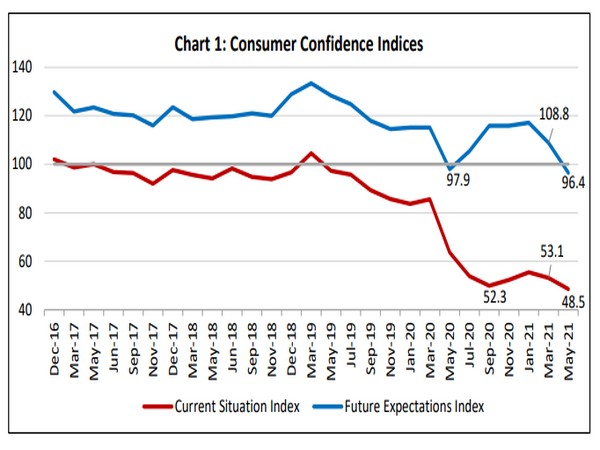 The anticipated thwarting of the second wave got muted by the government and the RBI. However, consumer morale has been shrinking even before the emergence of the pandemic. A lot of it accounts for the incessant roadblocks in the economy and job creations. According to the survey, the future expectations index also moved forward towards a pragmatic downfall for the second time running since the overhaul of the pandemic.

What drives such excruciating numbers? Probably, it gets appraised on three eminent forefronts- general economic situation, the employment scenario, and the household income. RBI claimed that the parameters discerned that the consumers have got triggered by the bearings, and felt hard done.

Barring the contraction in the non-essential services accommodation, the essentials spending also downgraded showing signs of moderation. In the latest survey round, the household incomes have incessantly manifested a shocking dip. Indian economy drives on the stimulation of consumption, but the recent weakening projections imposed by the high-frequency indicators suggest bad news. Many indices have reflected a synopsis that the vast majority of the people believe that things have changed for the worse, and it exceeds the share claiming an improvement in recent times.

With the inducements of lockdowns coupled with vaccine shortage, consumers’ perception has been followed towards negativity as they inhabit fear and anxiety. It’s kosher that the urge of policy intervention by the RBI and the government to ease the restrictions is much needed like never before. It would not only unleash newer opportunities but also boost up the devastated citizens. However, the gargantuan challenges stand in the way of success.

According to the survey of households for inflation expectations, the consumer’s belief in the entrenchment of price pressures has exceeded 150 median points from the previous rounds of interviews. Household median inflation perception soared to 10.2 percent for the current period. On the other hand, the future perception index for the upcoming three months period reverberated an increase by 70 basis points.

Complying with the astounding growth in inflation over the one-year horizon, the tables have turned drastically for the RBI as they ought to resume the certified interest rates rather than easing. The monetary policymakers have incurred an attempt to revamp the interest rates following the concerns of business enterprises. But so far, their efforts have failed to derive a valiant impact.

Previously, the respondents have been optimistic about aggressive demand for products in the markets. Today, the pipedream has become imaginary. Around 60 percent of the respondents have a prolepsis based on higher inflation in the coming days, and the vast proportion is associated with the food group. Inflation enacts as a roadblock not only for venturing new investments but its exaggeration could lead to exhaustion in savings. It will lead to troubling humans to ramp up their acquisition of products and services.

What Happens if the Consumer Remains Bleak on the Future Expectations Index?

The Future Expectations Index has dropped to 96.4, reflecting the detrimental effects of the pandemics on the human mind. The consumer has rescinded their spendings as concerns mounts over the unemployment scenario in India. Around 15.3 million people suffered the fret of losing their jobs, and that too happened so swiftly. With the tight constraints of money circulation in the economy due to inactivity in various sectors, the demand upheaved, and so did inflation.

It enraged doubts in the RBIs policy-making, and that is why the consumers left unsure about their future year-ahead prospects of spending. If the bleak constantly triggers consumer’s confidence, then India’s growth aspirations will get hindered. Due to less money disposal in the markets, the government will not delve higher growth returns. Eventually, the economic slowdown will get entrenched, and the consumers will be the ultimate sufferers of the soaring prices.