Suzlon Energy, in a statement, has said that market regulator SEBI has appointed a forensic auditor to carry out an audit of the company’s financial statements.

The company which received the letter from the Securities and Exchange Board (Sebi) said that the appointment is in the context of disclosures of financial information and business transactions and if there are any violations of the applicable provisions of the SEBI Act or the Securities Contracts (Regulations) Act 1956, and the Companies Act, 2013 or other applicable laws.

Gujarati businessman Tulsi Tanti controls Suzlon Energy, has been saved by lenders many times in the past seven years; the company is a wind turbine manufacturer based in Pune.
The company had made great strides initially and was ranked by MAKE as the world’s fifth-largest wind turbine supplier.

The company was founded in 1995, and in 2003 Suzlon got its first order in the USA from DanMar & Associates to supply 24 turbines in Southwest Minnesota, and thus began the climb in business for this company.
However, soon the company found itself in the doldrums, by 2019, the share price of the company had fallen by as much as 8.6%, the debt-laden wind power equipment maker defaulted on a $172 million bond payment, and then there were talks that the company was in dialogue with several global private equity funds to sell a majority stake. 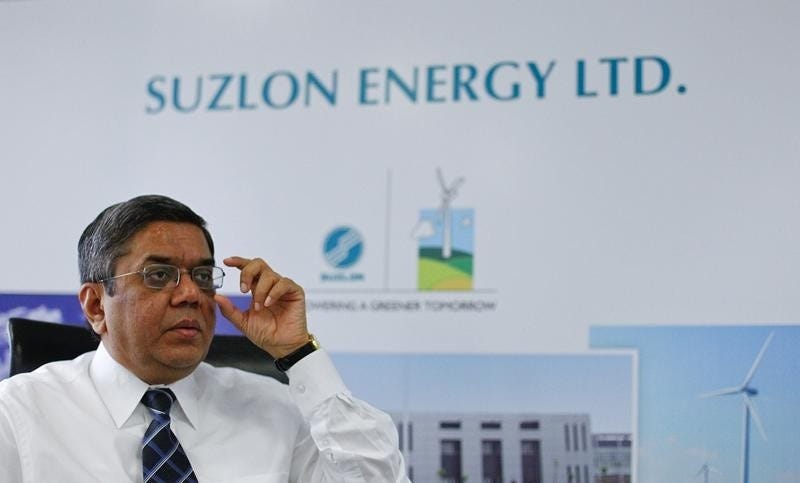 By that time, Suzlon Energy had been posting losses after losses; the issue started when Suzlon failed to make payment of principal of $172 million on outstanding foreign currency convertible bonds that were due.
The company was in negotiations with Canadian investment firm Brookfield Asset Management and Denmark-based Vestas Wind Systems for a majority stake sale, but both the deals were unsuccessful after the lenders asked for a higher valuation.

The creditors had then said no to a 50% haircut in exposure in the debt-stricken company, and market watchers suggest that the fact that there were no takers of its assets might push the company into bankruptcy.

The bankruptcy saga of Suzlon Energy
Suzlon Energy had in 2013 restructured their loans which gave them time to sell assets to settle loans and facilitated Sun Pharma chairman Dilip Shanghvi to come in as a stakeholder, with a 23 percent stake currently Dilip Shanghvi and family have the largest shareholder in the company with Tanti and family holding just 20 percent stake.

The company had then defaulted in repayment of principal and interest payable to lenders aggregating to Rs. 412.38 crore in 2018. It defaulted term loans, working capital loans and failed in making payments to certain overdue creditors.

Suzlon’s net loss widened to Rs. 4 billion in Q1 of FY 2021; the company had earlier announced that it had completed restructuring debt with unanimous approval from its secured lenders. According to the company, the term debt reduced substantially with an interest rate of 9% per year, repayable over ten years, starting July 1, 2020.

In 2020, the company brought in some changes and appointed Ashwani Kumar as its new CEO, who replaced JP Chalasan in October. The new CEO brought in with him a good resume as well as dozens of deals under his belt. He joined Suzlon when the company had finished its debt restructuring, which was followed by an internal restructuring. This helped reduce the interest costs by 70% and fixed costs by 30 – 40%.

Suzlon had hoped to jump into profitability as it expected that the leaner cost structure, it’s vast manufacturing, and the existing order of 876 MW would help it bounce back by 2022.
However, the current appointment by SEBI would indicate that it wanted to check in on the financial reports of the company.

Suzlon Energy also issued a statement that it “being a global company, having strong internal controls and an effective audit system, believes that the company has been and is compliant with the applicable laws and regulations.”