Godi Media’s demonization of farmers has angered farmers. Television networks are doubling down on their efforts.

Farmers’ wrath towards a sector of the media is increasing as they continue to demonstrate against the Narendra Modi government’s new agricultural rules along Delhi’s borders.

“Godi Media,” which includes Republic TV, Zee News, and Aaj Tak as well as other media outlets like Times Now, is the target of the farmers‘ wrath, according to Newslaundry on Tuesday.

In addition to “Republic,” “Zee News,” Don’t hide us,” a banner at the Singhu border protest said. “#GodiMedia, you’re spreading a hoax.”

Singhu farmers refused to talk to reporters from Aaj Tak, while Zee Punjabi journalist Vasu Manchanda was escorted out of the area.

Comedian Indrajeet Singh, who has been protesting against Singhu, said, “We aren’t dumb.” Anjana Om Kashyap and Arnab Goswami are two of the news anchors we’ve been keeping an eye on.” There is no need for them to assist us or provide media attention.”

As opposed to listening to the farmers’ concerns and making a course correction, the media outlets have gone all-in. Here’s how they handled the demonstrations on Tuesday night’s primetime programmes.

There are “malicious parties revealed” when farmers and the government work out their differences, Arnab Goswami said in his discussion programme.

The farmer unions rejected the government’s suggestion to form up a committee to investigate their requests, urging that the new agricultural rules be repealed during a session of negotiations yesterday. December 3 has been set aside for the next round of negotiations.

At the farmers’ demonstration today, the same Chandrashekhar Azaad who said in January, ‘Make every bagh a Shaheen Bagh,'” Goswami added. Since last year’s CAA protests in Shaheen Bagh, Yogendra Yadav has been promoting a disinformation campaign against the farmers’ bill. Protesting farmers have called out the same Vadra Congress whose cunning intention was revealed by the Republic in Hathras.

See also  The Truth Behind the "Vaccine Shortage"

#FarmersRejectPolitics and taglines like “Farmers reject politics, speaks back” and “Every effort at politicization fails” were shown on the broadcast. 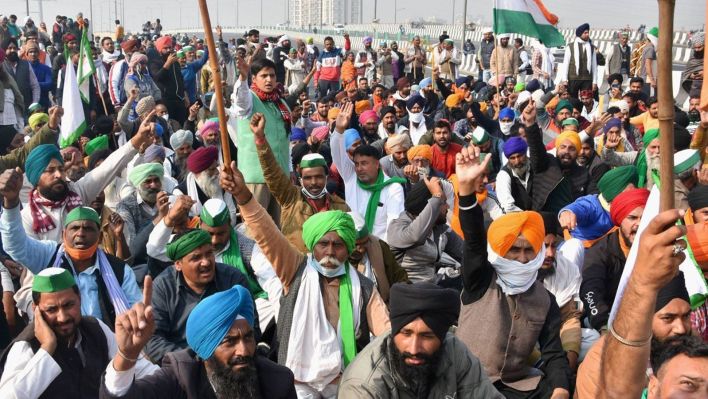 In the wake of the violence his reporters saw during the demonstrations, Sudhir Chaudhary, editor of Zee News, said that his channel always presents the “truth”, and that’s why it’s refused admission to areas “where anti-national forces become active.”. Zee News’s “entry band” is “wahan wahan” in the context of “Hamare desh mein jahan jahan desh virodhi sakriya ho jaati hain.”

At Jawaharlal Nehru University and Shaheen Bagh, he stated demonstrations like this occurred, and it’s taking place at Singhu today. Only those who “raise Khalistan Zindabad chants” and “become extremely upset and beg not to be interviewed” are antagonistic to Zee News, he said.

Anjana Om Kashyap, the host of Halla Bol, could only devote 10 minutes of her 54-minute broadcast to the demonstrations by farmers. After that, Kashyap spent the remainder of the broadcast talking about Shehla Rashid’s family, which he thought was more important than the hundreds of farmers who were demonstrating outside Delhi.

As far as the farmer demonstrations were concerned, the few minutes Shweta Singh spent summarising their rejection of a committee to consider their requests were spent more on her summarising the reasons why the farmers rejected the plan.

Narendra Modi’s leadership style has been defined by his propensity to provide massive news announcements with a minimum of words. On Friday, Prime Minister Narendra Modi said that his administration will soon abolish the three complex agricultural laws imposed by Parliament in 2020.

From the beginning, the three laws intended to liberalise rural areas by enabling private involvement and so removing the state from the equation have been problematic. On these, no MPs cast a vote. Because of this, they are now law.

The BJP’s most trusted ally, the Akali Dal, walked out from the government because of it.The rural laws sparked protests in Punjab, Haryana, and Western Uttar Pradesh.

For the better part of a year, farmers set up camp near Delhi.
Members of a gang who attacked a victim

Agricultural protesters were assaulted with the same ferocity as earlier this year’s Citizenship Amendment Act protesters. Sikh protestors were portrayed as separatists fighting for Khalistan or an independent Sikh homeland in the assault.

Protesters have “Khalistani and Maoist” affiliations according to Amit Malviya, the BJP’s Information Technology Cell leader. In January, a BJP MP was elected to represent Rajasthan in the state legislature. Prominent lawyer argued in January that “Khalistanis had infiltrated the protests” in a Supreme Court order.

Pro-government media eventually spread this rumour. Times Now asked a BJP party staffer whether “Khalistani contributions incited the violence” following a horrible car assault on protestors have Uttar Pradesh through the son of a BJP MP.

As recently as February of this year the Delhi Police said that Disha Ravi had collaborated with Khalistani radicals via the dissemination of protest material. Greta Thunberg, a Swedish climate activist, published the same “toolkit” of materials.

The BJP’sBJP’s surprise pullback after any such loud, emotional plea has left many perplexed or even outraged.

After a tense standoff with Modi, the protesters became irritated and dry as a result of his sudden moves. In pro-BJP media, a similar sample was found. Removing Jammu and Kashmir’s special status and the Citizenship Amendment Act from state law was even seen by some to be a necessary step in the conversion of agricultural policy.

See also  Farm Bills 2020: Who is Harsimrat Kaur Badal, the Minister Who Resigned, And Was Even Arrested On Thursday?

It is hardly unexpected that fans are perplexed. This is the nadir of Modi’s political career. At some point during his first tenure, he no longer recommended new laws for land purchase, but he also didn’t incite large rallies or anything like the BJP’s Khalistan push. A strongman image of Modi is critical to the BJP, therefore the party will have to work hard to repair the harm done.

Prime Minister Justin Trudeau’s words in favour of farmer demonstrations and the Congress party’s endorsement of them received extensive attention on Rahul Shivshankar’s India Upfront programme. Shivshankar said that the opposition parties in India had “exposed” themselves by focusing on Trudeau’s comments. As for the BJP, the demonstrations have been labelled an “internal problem” by the party.

Is there a reason why the lobby is backing Justin Trudeau’s remark on an issue that is essentially an internal matter? from whom did the anchor demand information? Is there a way to make a protest seem larger than it is? You bring in a few international dignitaries. As a result, Justin Trudeau swoops in.”

“Shaheen Gang encourages dharna,” “Dadi, Ravan,” “JNU, Cong and AAP,” and “BJP blasts bid to derail and instigate,” “1st Muslims, now Kisaan a prop?” were some of the headlines that Times Now came up with to accompany Shivshankar’d tirade.

So-called civil society organizations that don’t like the administration of Prime Minister Narendra Modi have jumped on board the farmers’ bandwagon, Shivshankar said.