Bangladesh’s stance on joining the Quad remains perplexed following its bilateral relations with China. China’s discretionary warnings have evinced from being authoritative to threatening in the midst of exemplary status. Earlier this week, China blamed the Quad for being a prominent clique against Beijing as it defended its Bangladesh insinuated warning to forbid the idea of joining the US-led alliance. China’s Ambassador in Dhaka Li Jiming issued an explicit caveat to its neighbor allies that integrating its interests to the four-nation group could give headway on the detrimental forefront and the bilateral ties could perceive substantial damage.

However, the Bangladesh contingent did not take the derogatory comments virtuously and the foreign minister Dr. AK Abdul Momen on Thursday described the catastrophe as very fortunate and aggressive. The feeling around the world has always been to solicit China’s assistance to expand their economic lines and the South Asian countries including Bangladesh and Srilanka have followed the word of their allies and now stand leveraged to mounting debts.

It is an argument for another hour, and let’s turn our attention to the reaction of Bangladesh officials on the concerned matter. The riposte should be perceived as a reflection of the grimace mood that the countries have encumbered amidst the tormenting pandemic. The coronavirus that was unveiled through the wails of Wuhan has proclaimed to every corner of the world, while China combated the virus at its end subsequently without helping its cooperative nations.

Although the officials didn’t want to hurt the sentiments of Chinese regulators comprehensively, they have tried to tackle the state of affairs in a deluded manner. Dhaka’s response has been far from audacious yet it portrays a stance of intolerance. It stood by its commitment to no-aligned and well-versed foreign relations across congregations.

An arduous slap on the face of China’s conceitedness. While Srilanka’s economy holds the incarnation of Chinese pressure, it does not indulge in the same thought process identical to Bangladesh. Colombo seems to be lacking the potency to tackle its relations in the region, which has tormented its progress as an independent democracy. 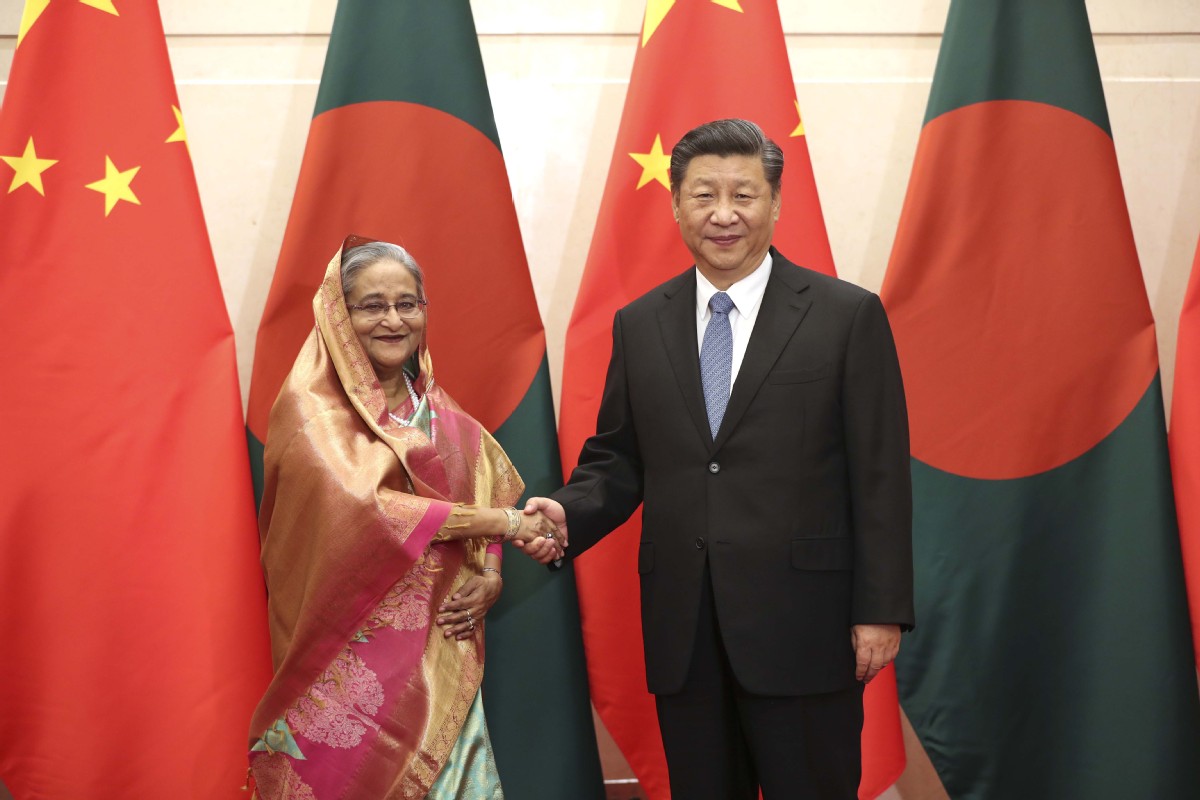 Keeping in a record, both Bangladesh and Srilanka have not been summoned to join the Quad has left a bad impression about the four nations across the different administrations. The Srilankan parliament has been deluded in a puzzling situation as it faces the complexities of enhancing Chinese control within its ranks. It has reviewed the controversial Colombo Port City Economic Commission Bill and is all set to debate it at the international cabinet meeting with China. Colombia has ceded the control of its ports accustomed to China’s interests, and the ship has drowned massively.

The emissaries of senior members of the Chinese military, led by Director General Wei Fenghe, made an escalating two-day trip to Srilanka to consolidate the proposal of diminishing its roleplay in the turbulence of Colombo Port City. Srilanka’s Foreign Minister Jayanath Colombage had manifested his perturbation theory on the current Quad Nations agreement,” The rise of the Quad as an exclusive military alliance is creating a deep loophole across economies of the world. However, if the Quad Nations is putting the economic upswing as its focal point, then it is confining knotted down signs.”

What were the highlights of the Beijing Dhaka verbal dual? What repercussions could it hold for India and other Quad Nations? The flagrantly pompous nature of China’s In embedding forays into the Indo-pacific and other Asian capitals is troublesome for India. The competition to checkmate China has been arising across Quad Nations, as it was one of the underlined points in their initial agreement. The blatantly obvious reason for that has been China’s discernment to cooperate with the rest of the world to steer out from the coronavirus outbreak. The country maintained pillorying silence in need of the hour, and that’s what agitated communities.

China’s Ambitions to Suppress World’s Power in its Jurisdiction

China’s discomfort and antagonism towards the sky-high coverage of the Quad Nations have never been hole-and-corner. Barring the contradicting statements and playing games by terming the Quad as a military alliance established to fight against China’s resurrection and its continuing support to its neighboring countries, it is inclined more towards the geopolitical impacts on its hegemonic objectives in the region. In line with intensifying its connections with countries in Asia, China is not required to achieve any diplomatic vendetta.

India’s Parliament underwent a foray in Eastern Ladakh- one of the evilest discretion in the history of the realm of politics. It is not merely a coincidence that all the pinpoints where China gets inculcated are not in context to its connections or affiliates with Asian countries as it wants to strike political supremacy. A shocking revelation of events during the times when the world succumbed to the grimace of the pandemic will showcase a pattern of China playing its bit to manipulate the world’s strategies by the scruff of draconic insights.

Beijing wants to instigate the Indo-pacific region under its inextricable political and economic avenues. But that would only be possible if the rest of the world sheared to the same synopsis of China.

An Asian Consolidation, Urge of the Hour

Beijing’s supremacy in Asia, Indo-Pacific, and India’s extending territorial bodies must have been dealt with preciseness and applying a strict course of action. The word across the communities is that the forging of a rules-based regional directive through an Asian consolidation would have hindered China’s conviction. In the context of the grand scheme of things, it would have uplifted the tenors within the countries who are feeling the tormenting fret, observing their economic sovereignty getting pawned to hegemonic power.

The condemnation of the global recognition and resources of the country has brought it to a jangling enigma, where it lies stranded between China’s political hubris and its democratic decline. China has tried out manipulative tactics to guard its interests in those countries by encouraging a transformed global visual. Well, it has faded off quite rapidly, and the neighboring countries stand on the verge of the insatiable appetite for global resources and denigration of human rights and democratic structure.

China’s paramount holy grail of dominating the global markets, supply chain systems, and other eminent factors has gone on a breakthrough journey through its Belt and Road initiative. The roadmap of virulent ascendancy stretches from the Pacific to the Indian Ocean, Australia and Africa, and other key associations.

India’s decision to go ahead with its 2+2 ministerial dialogues on the foreign and defense ministerial levels with the Quad nations and Russia could do the world of good in its abiding race to face retaliation from China and other associated neighboring countries. The goal of extending the bilateral ties is to push down China’s dominance on the foreign forefront amid alarming signs received earlier in the eastern territory of Ladakh.

The Central Vista: An Exclusive Dream Project of the Prime Minister How did the propitious restructure model affect India's Covid-19 grappling? Why it isn't the right time for the cantilever?

Why is the US not sending vaccine doses to struggling countries like India even when it has a huge stock of extra doses piling up?

Tanish seeks new opportunities as a professional content writer and writes on several fundamental topics like businesses and economics. The focal point remains on expressing opinions on critical aspects concerning the economy.
By Tanish Sachdev
Follow Us
Weather
New Delhi, IN
Mist
30 ℃
32º - 29º
84%
3.6 km/h
32℃
Wed
34℃
Thu
35℃
Fri
35℃
Sat
35℃
Sun
Recent Tech News
Facebook Twitter WhatsApp Telegram Viber
Back to top button
Close
Popular Posts
Most Commented
Recent Comments
We use cookies on our website to give you the most relevant experience by remembering your preferences and repeat visits. By clicking “Accept All”, you consent to the use of ALL the cookies. However, you may visit "Cookie Settings" to provide a controlled consent.
Cookie SettingsAccept All
Manage consent