A number of startups are experimenting with what a better social app could look like. For a startup called Alms, the answer is a social network that focuses on users’ well-being through participation in creator-led challenges in areas like personal growth, sustainability, and others with positive impacts.

Instead of driving the collection “likes,” as on other social apps, Alms aims to encourage real-world engagement through its challenges and the specific steps and actions that must be taken. 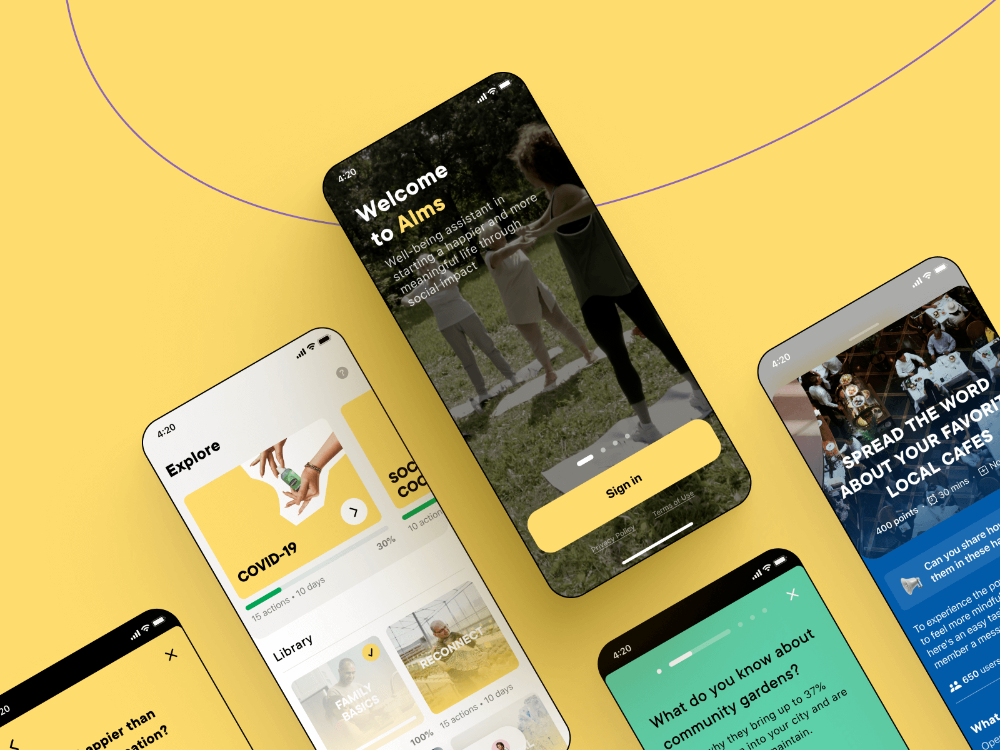 The idea, explains Alms founder Alexander Nevedovsky, is to design an app that guides users to a happier and more meaningful life when they use it. That’s something modern social platforms can’t really promise to do.

Work on the project began during the early days of the pandemic in 2020, Nevedovsky says.

“A lot of us were feeling depressed and sad, at home without much access to friends and family,” he explains. “I felt like the world really needed something that’s a bit more than just meditation, journaling, or mood tracking — all those apps and techniques are great, but they’re not designed to improve your life on a day-to-day basis, interacting in the real world.”

However, the original version of Alms released last year was lacking something that would make the app “sticky.” Users would sign up because they liked the concept, but at some point would drop out and stop participating in the activities.

The startup knew it needed something more to tie users to their journeys, which is why it has now shifted to become more of a social community. When you first launch the newly designed Alms app, you’re taken through a brief onboarding process where you select your interests from three main topical areas: personal growth, sustainability, and impact. For example, “personal growth” interests may include things like mental health, wellness, spirituality, or relationships.

“Sustainability” focuses on interests related to the environment and nature. And “impact” would wrap in things like activism, volunteering, local community, and more.

After setup is complete, you can follow creators who post challenges or choose to join individual challenges, each with their own set of steps that have to be taken in order to fully complete them.

For instance, in a challenge focused on improving your work-from-home lifestyle, the steps guide users to take steps to improve their workspace and their work-life balance (by scheduling breaks and hard stops to their day, e.g.), and asks them to add physical activity to their routines, among other concrete actions.

As you participate in a challenge by completing and checking off each step, you’re prompted to post a story about that step in that challenge’s feed to inspire others, who may add an encouraging comment. But gathering likes and comments is not Alms’ goal, says Nevedovsky.

“We see tremendous possibility in allowing more and more people with expertise in these topics — personal growth, sustainability, and impact of various sorts — to basically try to scale their impact with us,” he notes.

“We allow them to put all their knowledge or their content in a scalable way so that people can actually — not like it, not comment under it — but actually try to repeat it.”

At launch, Alms has around 30 creators sharing their content in the form of challenges on its app, and 15 more are in the pipeline. It hopes to reach a couple of hundred over the next few months.

So far, the new version of the app has attracted a couple of thousand users, as well.

Many of the challenges on the app have been joined by hundreds of users, so you do feel some sense of participating in a larger event when you click to join.

However, I’d personally prefer that posting a story and sharing it to the feed was optional — not every step deserves its own post, I feel.

(And sometimes, you may not have anything to say about the minor steps you completed and end up feeling like you’ve cluttered the feed with less-than-helpful posts.)

Alms was co-founded with startup studio Palta, a home to apps like Flo.Health, Simple Fasting, and Zing Fitness Coach Palta owns a majority stake in Alms, and the company has no other outside investment. A remotely distributed team of fourteen works on the Alms app, which isn’t currently monetized.

Nevedovsky says the team is considering adding some sort of token-based economy or perhaps a DAO which would convey some sort of real-world rewards. This could include being able to participate in Alms’ governance or joining a creator fund, for example.

The tokens, at least in the near term, would not be tradeable. The company may also consider simpler ideas, like in-app tipping. But nothing has yet been determined as Alms is still working on product-market fit at this time, and scaling its userbase.

Overall, Alms seems like it could appeal to those who want to be more mindful and impactful about how they’re spending their time on social apps, but who are in search of inspiration that comes with more specific direction.

“I think, a lot of the time, people place hopes on what will happen in the future without actually influencing it. So I think that having an app that helps you with ideas and inspiration from people who know what they share, what they recommend, is super helpful — especially when it’s all about support,” notes Nevedovsky. “People [on Alms] actually care.”

The app, we found, is well-built and attractively designed. But it could still face the original issue of having users drop off, despite its new social components, given the competition for screen time on today’s mobile devices.

Alms is a free download on iOS only for the time being.