Over the last six months, Uttarakhand has seen over 1,000 forest fire accidents, including 45 in 24 hours alone, and has entered a National Disaster Response Force helicopters and staff centre (NDRF). There have been confirmed killings of at least five people and seven animals. There has been a string of forest fires in Himachal Pradesh, the Nagaland-Manipur frontier, Odisha, Madhya Pradesh, and Gujarat since the beginning of 2021, including in wildlife sanctuaries. Forest fires erupt in different parts of the world during April and May. However, forest fires have been more widespread than normal in Uttarakhand, and have also occurred during the winter; one of the reasons is dry soil caused by a poor monsoon.
Forest fires have erupted in several areas
Prolonged fires were reported in Uttarakhand, Himachal Pradesh (Kullu Valley), and the Nagaland-Manipur border in January (Dzukou Valley). The current one in Nainital started at the end of March. Between the end of February and the beginning of March, a big fire broke out in the Simlipal National Park in Odisha. The Bandhavgarh Forest Reserve in Madhya Pradesh, sanctuaries for the Asiatic lion and the great Indian bustard in Gujarat, have recently experienced flames. 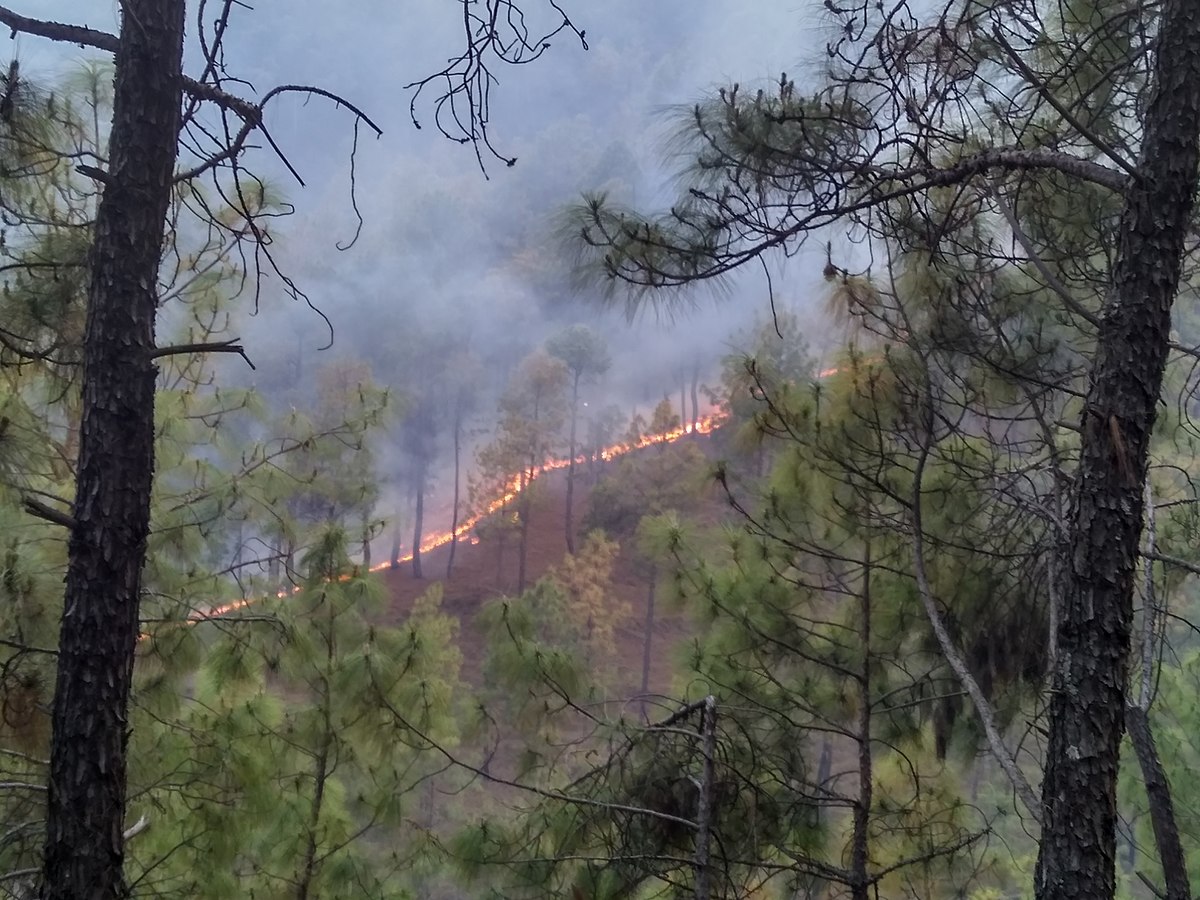 How fire-prone are India’s forests?
By 2019, the India Forest State Report 2018 (ISFR), reported by the Forest Survey of India (FSI), Dehradun, classified approximately 21.67 per cent (7,12,249 sq km) of the geographical area of the country as forests. Another 2.89 per cent making up tree cover (95, 027 sq km). The FSI said that forests in north-eastern and Central India are the most vulnerable areas to forest fires following recent fire events and reported events. The forests of Assam, Mizoram, and Tripura were recognized as being highly susceptible to a forest fire. In countries with vast areas under the category of extremely highly vulnerable, Andhra Pradesh, Manipur, Meghalaya, Mizoram, Nagaland, Odisha, Maharashtra, Bihar, and Uttar Pradesh are included. The annual MoEFCC report for 2020-2021 states that Western Maharashtra, southern Chhattisgarh, and Telangana, and Andhra Pradesh districts, along with central Odisha, are developing into highly vulnerable forest fire hotspots.
The areas under the categories “extremely susceptible” and “moderately sensitive” represent approximately 26.2 per cent of the overall forest cover – an astonishing 172,374 sq km.
How sensitive is Uttarakhand’s forest?
The two states that witnessed the most common forest fires last year are Uttarakhand and Himachal Pradesh. In Uttarakhand, the forest covers 24,303 sq km (over 45% of the area). In the southern, west, and southwest regions of Uttarakhand, the FSI has identified forests like Dehradun, Hardwar, Garhwal, Almora, Nainital, Udham Singh Nagar, and Champawat to varying degrees of forest fires.
How is forestry fire caused?
Forest fires may be caused by a range of natural reasons, but officials believe that human actions are the prime cause of many major fires in India. New research links climate change to an increase in fires around the world, especially the major fires in the Amazon forests of Brazil and Australia in the last two years. Longer-lasting fires, fires of greater severity, fires that occur more often, and especially flammable fires are all attributed to climate change. Forest fires are most frequent in India during March and April when the land contains vast amounts of dry trees, sticks, dead leaves, stumps, dry vegetation, and weeds that can quickly catch fire if a spark is present. The friction produced by rubbing branches against each other has also been known to start fires under natural conditions such as excessive heat and dryness. In Uttarakhand, a lack of soil moisture is often cited as a contributing factor. Rainfall has been 18 per cent and 20 per cent below the normal average in two successive monsoon seasons (2019 and 2020, respectively). However, forest authorities believe that the majority of fires are sparked by humans, often on purpose. A cigarette butt or a carelessly discarded lit matchstick will start a fire. In Odisha, for example, villagers are known to set dry leaves on fire to harvest Mahua flower, which is used to make a local drink.
Why is it too hard to put out forest fires?
The forest’s location and accessibility are obstacles to starting firefighting efforts. Dispatching fire-fighting units at high season is often complicated by a lack of personnel. Depending on the form of burning, timely mobilization of forest personnel, wood, and equipment across dense forests remains a problem. Since it is difficult to move large vehicles filled with water into the dense forests, most fires are put out manually with the aid of blowers and other related equipment. However, forest fires have been kept under control using helicopter services in the past. When it comes to putting out a forest fire, wind speed and direction are important. The fire often travels in the direction of the winds and upwards in altitude.

What causes contribute to forest fires being a concern?
Forests play an important part in climate change mitigation and adaptation. They serve as a carbon sink, reservoir, and source. More carbon is stored and sequestered in a healthy forest than in any other terrestrial ecosystem. Several crores of people in India depend on fuelwood, bamboo, fodder, and small timber, with 1.70 lakh villages close to forests (Census 2011). Forest fires will harm the forest cover, soil, tree growth, foliage, and overall flora and fauna in a variety of ways. Several hectares of woodland is left unusable by fires, which leave behind ash that is unfit for plant growth. Animal ecosystems are destroyed by the heat generated by the flames. Changes in soil chemistry reduce the consistency of the soil. Moisture and fertility levels in the soil are also impacted. As a result, the size of forests could be reduced. Fire-surviving trees are often stunted, and their growth is badly hampered.
What precautions are being taken to keep forests secure from fires?
The Forest Fire Alert System, introduced by the FSI in 2004, has been used to monitor forest fires in real-time since 2004. The system also uses NASA and ISRO satellite data in its advanced version, which was launched in January 2019. MODIS sensors (1km by 1km grid) collect real-time fire data from detected fire hotspots, which are then electronically transmitted to FSI. This information is then sent to the state, county, circle, division, radius, and other levels via email. SMS updates are sent to users of this device in the region. In January 2019, the FSI system had over 66,000 subscribers.

The pandemic and economics of pregnancies