From counterfeit goods to fake N-95 masks, price gouging to disappearing orders, shoppers on Amazon have a growing need to proceed with caution before clicking buy now. Since Amazon’s early days, the review is the one big metric customers rely on to determine the quality and authenticity of a product. Turns out many of those reviews can’t be trusted. Before the pandemic, the usual benchmark around average fake reviews was 30%.  The norm has now become close to 40%. In recent years, thousands of fake reviews have flooded Amazon and Walmart, eBay, and others, just as sales numbers have skyrocketed. And as shoppers stay home, online orders are up 57% since the same time last year and the number of reviews is up 76%. There’s an element where you simply want to trust starts and you want to trust the numbers, because if you can’t trust that, how do you know what you’re buying? From Facebook Brooks where bad actors solicit paid positive reviews to bolts and click farms that up-vote negative reviews to take kit the competition, fake reviews have boosted sales of unsafe products, caused huge brands to sever ties with Amazon, and hurt business for legitimate sellers. Many complain that they can’t compete, they are unable to surface their products that are new and innovative and truly valuable to customers because other products that aren’t so great see playing a game of review manipulation. One big draw over competitors like Walmart, Target, and eBay is that Amazon’s listing often has hundreds or even thousands of reviews instead of just a handful. If those Amazon customers aren’t really customers or if they are an organization of paid individuals who just sit there and go five stars, five stars, five stars, that doesn’t really tell anything meaningful about the product. The review software company Bazaar voice did a study of 10,000 consumers at the end of last year. 42% of consumers are saying that fake reviews from the mean itself would cause them to lose trust. 82% of those consumers are saying that would cause them to never buy that brand again. The problem is fake and real reviews are getting harder to tell apart. When you have no reason to think it’s a fake review, that’s when consumers in the most danger. And as shoppers increasingly turn online for things they’d normally want to shop for in-person, there’s a higher chance of serious repercussions from the purchase of a counterfeit or low-quality product. And if the products Amazon page is filled with fake positive reviews, shoppers won’t know to steer clear. A high rating can also trigger the converted Amazon’s choice badge, although Amazon did say it will delete the badge if a product isn’t adhering to policy.

“We have clear policies for both reviews and selling partners that prohibit abuse of our community features, and we suspend, ban, and take legal action against those who violate these policies.” – Amazon

Free products and payments are increasingly common incentives. Sellers solicit play for play reviews through popular twitter accounts and Facebook groups with thousands of members. UCLA and USC released a study in July that found more than 20 fake reviews related to Facebook groups with an average of 16,000 members. In more than 560 postings each day, sellers offered a refund or payment for a positive review. The FTC required reviewers to disclose any payment or connection to the product being reviewed. On some sites like Fiverr and Freelancer, the user gets around this by advertising marketing services, a think veiled reference to pay for play reviews. There’s also the more direct approach where sellers include a note inside a package asking for a review on exchange for a discount or other compensation. It’s not that Amazon’s sitting back doing nothing. It’s that the scope of what we’re dealing with is so vast. There are the legitimate paid reviewer programs like Amazon Vine, Early Reviewer, and Amazon Associated, which require reviewers to disclose that they’ve received a product for free in exchange for what’s supposed to be an honest review. But Amazon has little way to detect a compensated review when deals are made outside these programs. 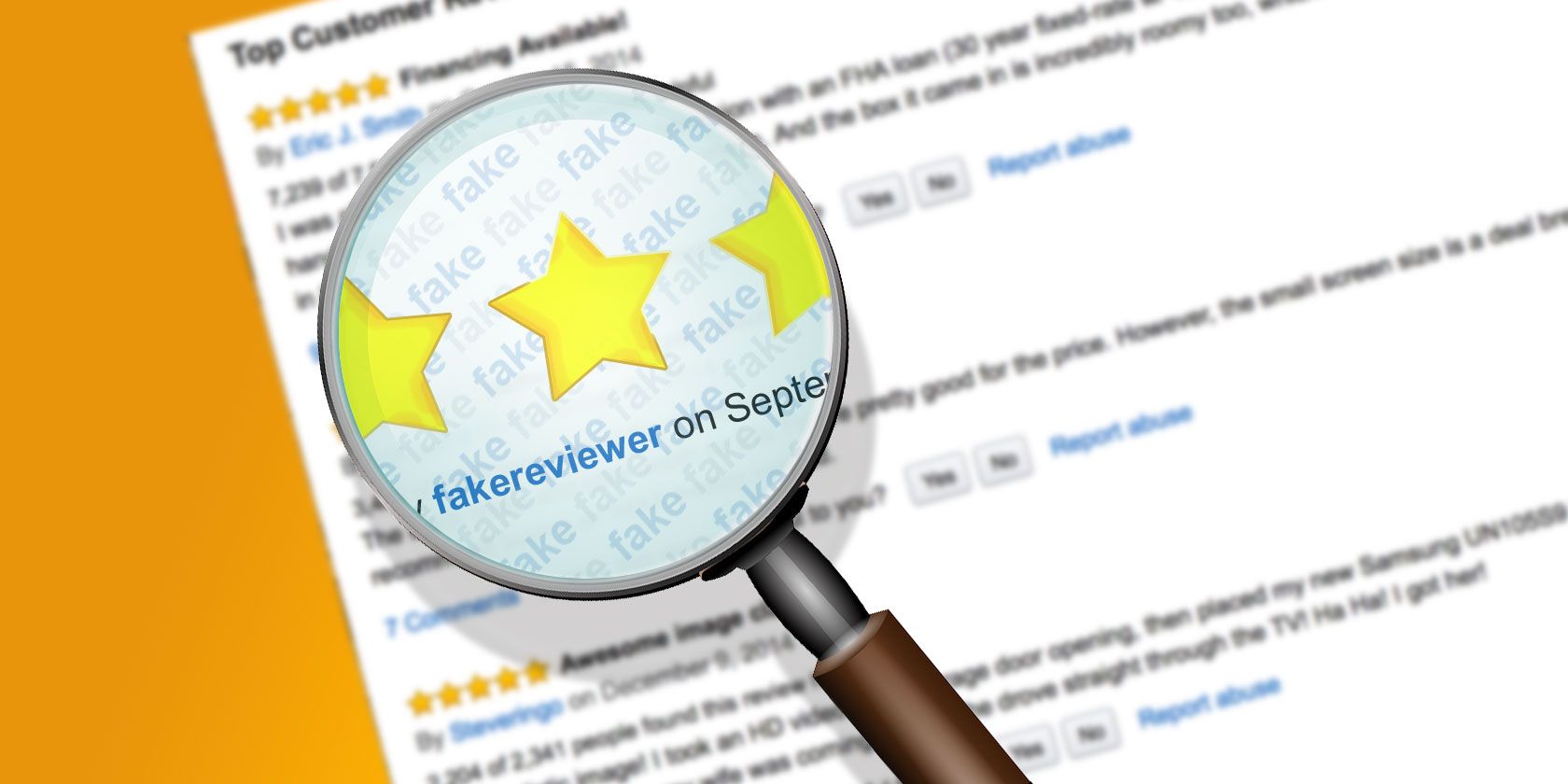 Let’s say your competitor has a one-star review on the first page, you can buy 100 helpful votes. When they’re considered most helpful, they show up at the top of the results. And so you can really harm your competitor by doing that. That’s helpful box can easily be clipped by both instead of humans or by click farms overseas. Bots are also getting better at generating convincing written reviews. Amazon’s own algorithms do usually detect these patterns and remove them within weeks. And then there’s a slew of new tricks popping up from the bogus seller accounts to mysterious free Amazon packages appearing on people’s doorsteps. In one tactic known as Review Hijacking, a seller takes over a once-popular listing. There are many methods like Brushing, Sock puppet and etc. With so many ways to create realistic fake reviews, some startups have developed ways to detect them. Fake spot is one of them. Fakespot launched a new chrome plugin in May that has a quarter-million downloads so far. It analyzes the credibility of a listing’s reviews and gives it a grade from A to F. The Fake-spot Guard will actually catch these sellers dynamically as you’re browsing Amazon. And they will offer you an alternative seller that is authentic and genuine that we’ve seen before that has high customer satisfaction. Other online tools that customers can use to check the credibility of Amazon reviews include ReconBob, ReviewMeta, the Review Index, and Review Skeptic. Shoppers willing to spend time to get their purchases can manually spot fake reviews too.

The number one-way consumers tell us they identify a fake review is multiple reviews with the same language in them. So, they’re basically looking for patterns in the reviews. The second most important way is reviews that are not actually about the product. The third is poor grammar and misspellings. And the fourth, which is the most important one is the overwhelming number of five stars positive reviews. Amazon says it used powerful learning tools and skilled investigators to analyze over ten million review submissions weekly, aiming to stop abusive reviews before they’re ever published. In an unprecedented move, Amazon hosted a virtual conference earlier this month to give tips and listen to concerns from its third-party sellers, who make up 58% of Amazon’s e-commerce business. When it comes to outside regulation, the fake review is prohibited by the FTC, but it’s a complex issue. Last year for the first time, the FTC prosecuted a company for fake reviews on Amazon. The inflated reviews were for a weight loss supplement that’s made with a plant that can cause acute liver failure. We can already see the FTC becoming more interested in reviews. They treat reviews as a form of advertising because of the influence that it has on shoppers. Now, Amazon supports a California Assembly bill that would subject online marketplaces to the same product liability requirements as brick and motor retailers, despite years of Amazon successfully fighting lawsuits against such rulings. If passed, it could incentivize Amazon and others to better police fake reviews. Amazon owns the keys to that data, and they can do it. As Amazon continues to help people stay safely at home, the need for shoppers to trust the reviews and order with confidence has never been higher. It’s almost a societal level issue of an Amazon kind of keep control of it’s a system and live up to the dependency that we have on them? They have been growing so fast that they have been struggling with it. On one hand, Amazon is getting better about policing. On the other hand, it’s a cat and mouse game, that probably will never end.

Vodafone Idea Reboot: VI Is the New Brand Name That Solidifies Their Alliances as It Heads for A Fresh Start

By Priyadharshini
Follow Us
Weather
New Delhi, IN
Mist
28 ℃
35º - 28º
89%
0 km/h
35℃
Tue
34℃
Wed
33℃
Thu
34℃
Fri
35℃
Sat
Recent Tech News
Facebook Twitter WhatsApp Telegram Viber
Back to top button
Close
Popular Posts
Most Commented
Recent Comments
We use cookies on our website to give you the most relevant experience by remembering your preferences and repeat visits. By clicking “Accept All”, you consent to the use of ALL the cookies. However, you may visit "Cookie Settings" to provide a controlled consent.
Cookie SettingsAccept All
Manage consent