Uttrakhand glacier disaster: Toll rises to 28; op to rescue those trapped in Tapovan tunnel on

The death toll from the Uttarakhand glacier disaster rose to 28 with the recovery of two more bodies, even as a multi-agency operation to rescue around 30 workers feared trapped inside a swamped tunnel at the Tapovan power project in Chamoli district continued on Tuesday, officials said.

Around 170 people are still missing after the Sunday’s disaster apparently caused by a glacier burst, according to the latest data. 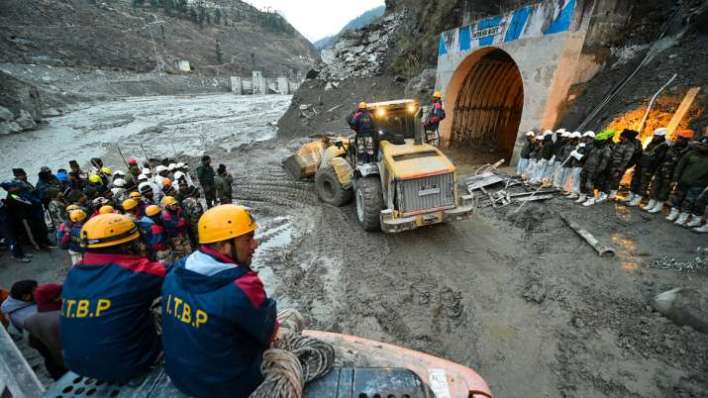 The workers have been trapped in the 12-foot-high and about 2.5-km-long ‘head race tunnel’ (HRT).

“Height of accumulated slush reduced more. ITBP personnel are j to \ as soon as any movement deep inside the tunnel is possible,” he said.

A senior official, however, said the rescuers have not been able to make any contact with those stuck inside but they are hopeful for “signs of life”.

Relief is also being distributed by helicopters among residents of more than a dozen villages cut off due to the washing away of a bridge in the avalanche at Malari.

Private and IAF helicopters have so far distributed around 100 ration kits in the affected areas of 13 villages with a total population of around 2,500, officials said.

On Tuesday, Uttarakhand Chief Minister Trivendra Singh Rawat undertook an aerial survey of the affected areas, visited the ITBP hospital in Joshimath and met the 12 workers who were rescued from a small tunnel in Tapovan on Sunday evening.

Talking to reporters, Rawat said the priority is to get to those trapped inside the tunnel and save as many lives as possible.

Additional heavy machines could be pressed into service to expedite the process of clearing tonnes of debris inside the tunnel, blocking the path of rescue personnel.

The clearing of slush and debris is a painstaking exercise but the multi-agency group of rescuers have a strong strength at the spot and they are taking turns to dig in deeper with the help of heavy machines and manual efforts.

Personnel of the Indo-Tibetan Border Police, NDRF, state disaster response force and the Army have been toiling with heavy earth-moving equipment since Sunday night to clear the tunnel and rescue those trapped.

As the temperature dipped to freezing levels, bonfires were lit at multiple locations to keep the rescuers warm.

The site, replete with slush, silt and debris in the aftermath of the flash flood was on Monday visited by Uttarakhand CM Rawat, Director General of Police Ashok Kumar and other senior officials as they made an on-spot assessment.

The about 1,500-metre tunnel has become the focal point of rescue operations in this disaster that appears to have been triggered after a portion of the Nanda Devi glacier possibly burst through its banks in Chamoli district on Sunday, leading to an avalanche and a deluge that ripped through the Alaknanda river system in the upper reaches of the ecologically fragile Himalayas.

While the ITBP has deployed as many as 300 personnel for conducting rescue operations at this site, a strong strength of the NDRF, SDRF and Army personnel is also present here.

The ITBP and other rescuers are carrying tall wooden planks which are being used by rescuers to wade in through the slush and will later also help create a platform to pull out the trapped people using ropes.

Pandey had earlier said these teams are ready with dragon light sets, oxygen cylinders and stretchers to provide immediate medical help to those trapped inside.

This Can Be The Reason of Glacier Burst in Uttarakhand Chamoli