On September 9th, a top decision-making source in East Ladakh informed that, during the 11th round of talks between India and China’s top military commanders, China refused to vacate two out of the original four reactions. According to the source, China told India that it should be “truly happy” with the results of the disengagement in the Pangong Tso sector. China still has platoon-level power and vehicles at two friction points, Patrolling Point 15 (PP15) in Hot Springs and PP17A near Gogra Post.

What happened here the previous year?

In May 2020, when China had transferred its armies which had arrived for their annual exercise on the Tibetan plateau, to the Line of Actual Control (LAC) in East Ladakh, which created a standoff with India, PP15 and PP17A were two of the four eyeball-to-eyeball soldiers. PP 14 in the Galwan Valley and on Pangong Tso’s northern bank were also the other friction points. At all these locations, Chinese troops crossed the LAC and were stationed around them. On the north bank of the Pangong Tso, the Chinese troops were stationed at Finger 4, which is 8 kilometres west of Finger 8, where India says the LAC is situated.

The Indian Army has been granted access to some locations along the Line of Actual Control (LAC) between India and China so that its troops may patrol the region under its control. The China Study Group (CSG) determines these thresholds, which are known as patrolling points, or PPs. The CSG is the apex decision-making body in China and was founded in 1976 when Indira Gandhi was the Prime Minister of India.
These patrolling cites, except Depsang Plains, are on the LAC, and troops use them to maintain authority over the region. It’s a crucial exercise because the border between India and China is yet to be officially established. Two of the 65 patrolling points along the LAC in Ladakh are PP15 and PP17A. (Some of these 65 have extra Alpha PPs, which are more advanced than the original PPs. PP17A is therefore distinct from, but similar to, PP17.) PP15 is situated in the so-called Hot Springs area, while PP17A is close to the Gogra post area. 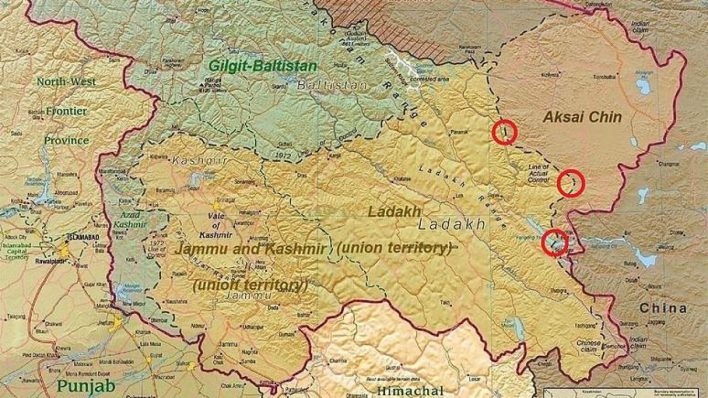 What are the locations of these two areas?

Both are located along the Chang Chenmo river in the LAC’s Galwan sub-sector in eastern Ladakh. Though Hot Springs is located just north of the Chang Chenmo Dam, Gogra Post is located east of the river’s hairpin bend as it travels southeast from Galwan Valley before turning southwest. The region is north of the Karakoram Mountain Range, which is north of the Pangong Tso Lake, and southeast of Galwan Valley, which has become a major flashpoint, with a violent clash in June 2020 killing 20 Indian and at least four Chinese troops.

What is the significance of this area?

The region is close to Kongka Pass, one of the major passes, which, according to China, marks the Indian-Chinese border. India’s claim to the international border extends dramatically east, encompassing the entire Aksai Chin region. During official negotiations of the boundary between India and China in the course of the 1960 Tibet Office for Foreign Affairs in the China Foreign Office, Yang Kung-su reported that the Western Border Sector has two parts with Kongke Pass as the dividing point north of which is the border between Sinkiang (now Xinjiang) and Ladakh while the southern parts of it have the Tibet and Ladakh boundary. As a result, Hot Springs and Gogra Post are located along the border of two of China’s most historically troubled provinces.

What is their military significance?

Both PP15 and PP17A are located in a region where India and China have reached a consensus on the LAC’s alignment, which runs southeast from Galwan Valley, descends at Konga La, and continues to Ann Pass until reaching the north bank of Pangong Tso.
A major People’s Liberation Army post is located a few kilometres east of Kongka La, while Indian posts are located southwest of it.
However, the area is not identified as a large “launchpad” from which either side would launch an attack, according to the official history of the 1962 war between India and China.
According to the official history, the Chinese were successful in removing potential launch pads for any offensive against the Aksai Chin highway by eliminating the DBO, Chushul, and Demchok positions. It was said that this reinforces the argument that Indians should have tried to maintain at least one jumping-off point: Chushul. However, also during the 1962 conflict, Hot Springs was a vital post, according to history. The Galwan Post had a company strength in October 1962, while three other posts—Hot Springs, Nala Junction, and Patrol Base—had platoon strengths. On October 21, the Chinese shelled Hot Spring, which was also the Company’s headquarters. At the Nala Junction, Chinese troops tried to get behind Hot Spring but were repelled.

See also  How fears of Chinese digital espionage ‘got RAW involved in Mauritius, leading to a snooping scandal’

What is the current situation?

Disengagement of forces from PP15 and PP17A, two of the four initial points of contention during the latest standoff, began in June 2020, during the initial rounds of talks. After the third round of senior military commanders’ meeting in June, following the Galwan Valley clashes, both sides decided to disengage from PP14 (Galwan Valley), PP15, and PP17A. Despite withdrawing its troops from PP14, China did not complete the disengagement from PP15 and PP17A.
While each of these sites used to have a company-sized force, there still a platoon each, along with military vehicles. Following the disengagement in the Pangong Tso area in February, where both India and China withdrew their forces and armoured columns, senior military commanders were to meet to resolve the other points of contention, including these two and the Depsang Plains. Nevertheless, the talks did not break fresh ground and China refused to retreat.