Global Economic Warfare: With America’s failure in Afghanistan and its forces receding, its President took a pledge- America will continue to maintain pressure on the Taliban. Amongst various kinds of sanctions, economic sanctions were the most preferred by the Biden government. These economic sanctions have been maintained even though they have been having a detestable impact on Afghanistan’s aid-dependent economy which is still recuperating from years of war and devastation.

It is to be noted that the current economic sanctions are the latest steps taken by the U.S. in a world that is swiftly shifting from military to economic warfare. This is hugely due to the globalization of the world that has made countries more dependent than ever.

According to the data, under former President Donald Trump, the U.S. had on average sanctioned more than 1,000 entities or people in a year. This staggeringly shows that how often the US uses its economic prowess to subdue nations around the world. This is mainly done by obstructing or barring nations’ or people’s access to the U.S. financial system.

Though with Mr. Biden’s accession, a fresh perspective had wafted through the White House as he had emphatically promised to review the use of sanctions. But as the matters of office proceeds and world politics and diplomacy unfold, Mr. Biden can be effectively seen on track to match Mr. Trump’s pace. Since his ascension to the office, he has hit categorically 13 different countries. Such countries have been hit for various discrepancies like election interference, human rights violations, narcotics trafficking, and more. According to reports, such discrepancies are discovered by the robust AI system, which uses the high-tech system to track global sanctions activity. 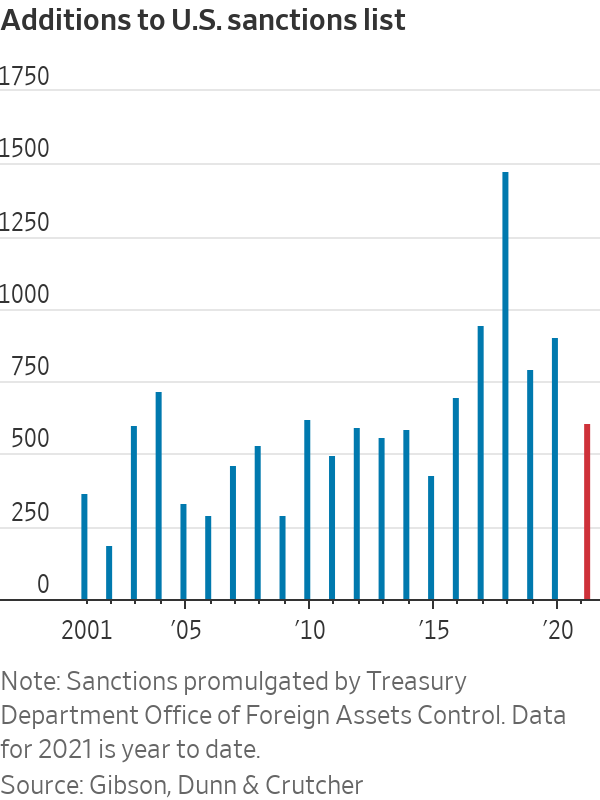 Though if the roots of such warfare are to be scrutinized, its foundation was effectively laid in the charter of the League of Nations, that had effectively enshrined economic sanctions as a tool to effectively deal with humanitarian and aggressive crisis around the world. In comparison to military warfare, economic warfare is preferred as it is silent, deadly, and somewhat a peaceful remedy to maintain peace around the world. Even President Woodrow Wilson had declared that there is no need for force and it is the best way forward for negotiations.

Why is global economic warfare so effective?

It is to be noted that such sanctions are quite popular due to the fact that today’s economic and trade order relies heavily on globalization. This effectively increases potential pressure points to bring the negotiating party to the table. The most appropriate example of the same is China’s rise US’s containment policy which is primarily economic and not military.

The level of advancement is humungous as sanctions today go far beyond boycotts. They encompass strategic export controls, import-substitution, banning of economic aid, etc. which effectively affect the economies of different nations. Such a tactic has been used by the US Commerce Department that had strategically banned doing business with some Chinese companies.

But is this warfare tool applicable unanimously to everyone? The answer to that is an emphatic yes. This is due to the fact that America quite effectively and significantly applies sanctions not only on small but also big countries. These big powerful countries include Russia and China. But is America alone using such warfare tools? No, big countries like Russia and China have embraced the economic weapon.

In fact, according to reports, China may be the world’s most accomplished and significant practitioner of economic coercion. This is mainly because it regularly hits its trading partners like Australia and South Korea with periodic export restrictions and economic boycotts or import restrictions. But here it is to be noted that China does not necessarily publicize such sanctions.

Though, this doesn’t mean that China does not impose official sanctions, in fact over the period of last year China has effectively levied official sanctions, often for unspecific offenses like “maliciously spreading lies,”. This was mainly due to China’s dubious involvement in Covid handling.

Given all the economic and diplomatic advantages of using the economic warfare tools, it is to be noted that it has some serious downsides. With economic embargo and restriction, the trade between two nations falls which impacts the traders and exporters highly. Given the obstruction that is caused due to the embargo on trade, the economy of the country suffers. This suffering usually materializes into enormous hardship that people in the targeted countries. In fact, according to various experts, economic warfare is much deadlier than a military conflict.

Currently, Afghanistan is unable to access foreign aids because of various sanctions. But given the economic discrepancy and havoc that plagues its economy at the moment, it is quite diabolical.

Afghanistan attracts various sanctions for narcotics trafficking imposed by the US to prevent the spread of drug and narcotics usage through the country. But given the negative reinforcement, it is to be noted that such hardcore measures rarely work to alter public behavior. This has been widely demonstrated in various conflicts in North Korea, Cuba, and Venezuela. On the other hand, China’s economic assault hasn’t actually stopped Australia’s government from demanding an emphatic and pending inquiry into Covid-19’s origins discrepancies involving China.

Thus, it can be rightly stated that when sanctions succeed successfully, their effectiveness is often of a fleeting nature. In fact, the most appropriate example of non-compliance comes from Iran which effectively had resumed uranium enrichment after the Trump administration had renounced the deal and had effectively lifted the sanctions.

Thus, perhaps the renewal or innovation in warfare techniques is needed but will countries ever budge to change their economic crippling approach is something we’ll have to wait and see.