This year’s World Water Day marks a significant momentous occasion in the history of Indian hydrology. On March 22, Madhya Pradesh and Uttar Pradesh signed a memorandum of understanding with India’s Federal Minister Jal Shakti to implement India’s first interlinking of the Ken and Betwa rivers in the Bundelkhand region. It is a connected river project. The Link Project made it the first project of the National River Connectivity Plan.

Prime Minister Narendra Modi and relevant states’ CMs all participated in the event. The Ken-Betwa link project (KBLP) will connect the two main rivers (Yamuna tributaries) of Bundelkhand and is expected to provide 1.062 million hectares of irrigation per year in arid regions.

The Union Jal Shakti Ministry stated that Bunelkhand’s 6.2 million people will have access to drinking water and 103 megawatts of hydroelectric power. Although India’s first river interconnection project has many benefits, it also faces some opposition. People have raised concerns about the environmental and ecological impact of the project and the restoration of the project.

In an exclusive interaction, the Director of the National Water Development Agency, Bhopal Singh, talked about how the Ken-Betwa River Interlinking Project(KBLP) will meet Bundelkhand’s needs and addressed all concerns raised about the project’s environmental impact and restoration issues.

How Will The Ken-Betwa River Connection Project(KBLP) Help In Meeting The Water Demand And Needs Of The Bundelkhand Region?

The KBLP (Ken-Betwa River Link Project) is the first river project interconnection under the NPP (National Perspective Plan) and is ready for implementation. The Bundelkhand region is facing repeated drought conditions, which hinder the socio-economic development of the region. Due to the hard rock and marginal alluvial topography, the groundwater in this area is not very abundant. Therefore, a larger-scale project is needed that will help to take advantage of flooding during the monsoon period and stabilize the water supply in the area during periods of infertility, especially in drought years.

The project will provide more than 1 million hectares of irrigation per year and will also provide drinking water for approximately 6.2 million people.

Among other benefits, the project will help revitalize the storage tanks in the area and help replenish the ground by making it possible to feed the area through the connecting canal. The project plans to use micro-irrigation extensively to improve water efficiency. The project will lead to the comprehensive development and management of water resources in the area, thereby providing water security for the area.

How Long Will It Take To Connect The Two Rivers And Complete The Project? What Is The Deadline For It?

The project consists of four main parts, namely the Daudhan Dam complex, including Ken-Betwa Link Canal, Kotha Barrage, Bina Complex Project, and Lower Orr Project. The Daudhan Dam complex is expected to be completed within 8 years. According to the comprehensive report of the link project, the Kotha Barrage, the Lower Orr, and Bina complex projects will be completed in 4,5, and 5 years, respectively.

MP, UP and the center has signed an agreement to implement the project on 22.03.2021. The project will be implemented through a special vehicle (SPV) of the Ken-Betwa Link Project Administration (KBLPA). The Indian government plans to implement the first ILR project as a model project. The project has received most of the permits. It is expected that the Public Investment Board and Cabinet and the second phase of deforestation will be approved soon, which will pave the way for the construction of the project.

The various stages of the implementation of the project are as follows:

What Is The Status Of Other River Interconnection Projects In India?

In 1980, the NPP (National Perspective Plan) was formulated to transfer water from water surplus basins to water-scarce basins/regions, and 30 connections were identified (Figure 1). 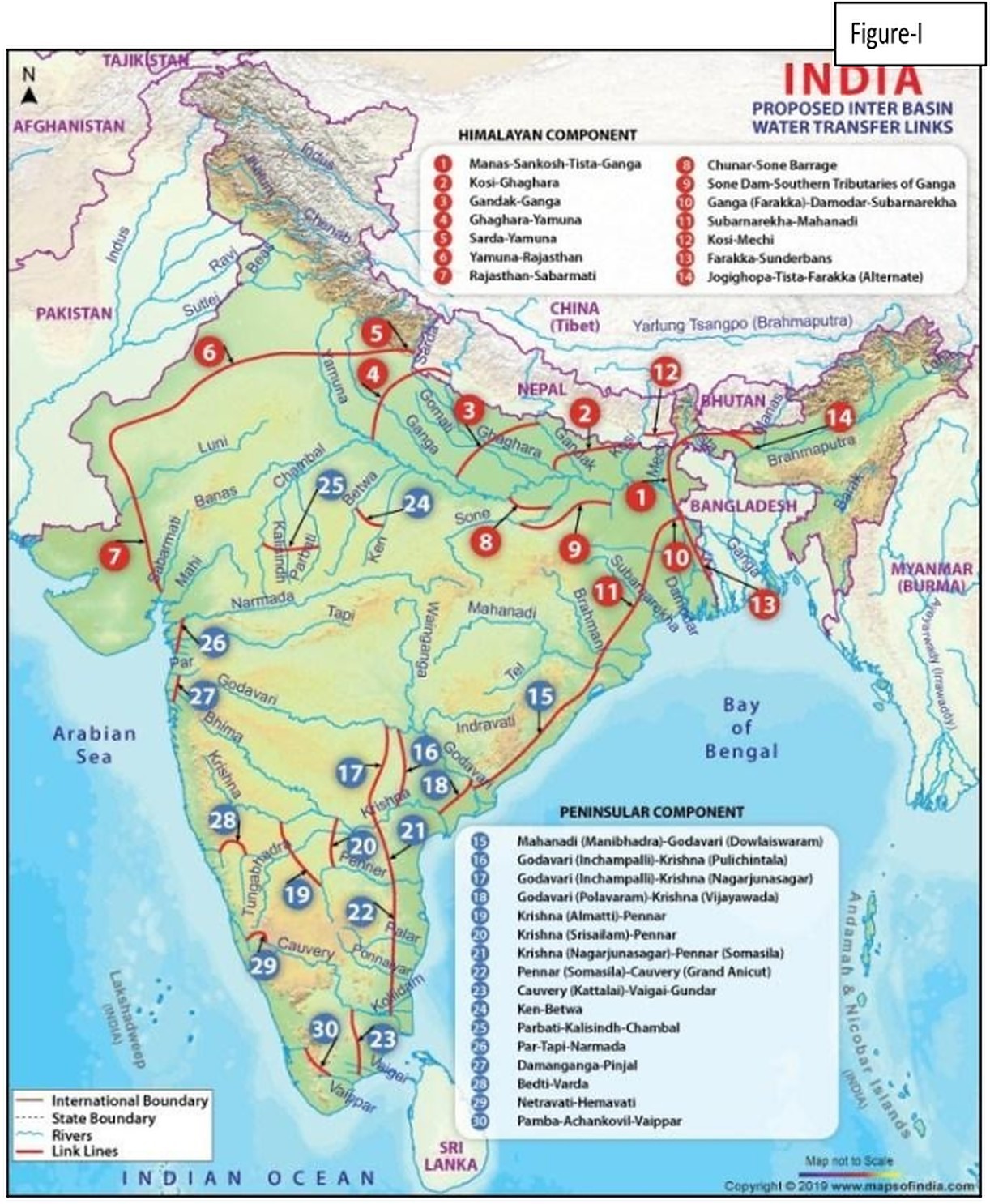 The National Water Development Agency (NWDA) was established in July 1982 to study the water balance of various river basins/diversion points and determine the feasibility of the identified connections. Pre-feasibility reports for all 30 links have been prepared and distributed. After investigation and research, the feasibility report of 24 links has been completed.

According to the decision made by the ILR Task Force and the SC-ILR (Special Committee on Interlinking of Rivers), certain links have been identified as priority links. Detailed project reports for all priority links have been completed, such as the Ken – Betwa link project, Par – Tapi – Narmada link, Damanganga – Pinjal link, and Godavari – Krishna – Penner -Cauvery link.

The technical and economic license of the Damanganga-Pinjal connection project has also been granted subject to the statutory license. The Central Water Commission is conducting a technical evaluation of the Par-Tapi-Narmada link DPR. The MoA/MoU that is implementing the Damanganga-Pinjal and Par-Tapi-Narmada link projects is being discussed with the relevant contracting states. The DPR of the Cauvery – Vaigai – Gundar link project has been completed and has been distributed to the contracting states. The DPR of the Bedti-Varada link project and the alternative project suggested by Govt. The map of Karnataka is being prepared. NWDA plans to complete the feasibility report/detailed project report of all potential links under the NPP by 2024.

As the central government is pursuing the ILR program, further progress in achieving various connections will depend on the consensus among the various parties and countries. It is difficult to achieve this through consultation and through the establishment of consensus among the parties and countries. NWDA has also studied intra-state links in accordance with the requirements of each state.

The Kosi-Mechi link project has obtained technical, economic, environmental and investment permits and the link is ready for implementation. The Daman Ganga-Vaitarna-Kadva Dev (Godavari) link and the DPR of Daman Ganga (Ekdare)-Kadva Dev in Maharashtra are in progress.

For the future of Indus River Interconnection, to a large extent depends on the successful implementation of the KBLP, Are you conscious to ensure success, and how do you view the concept of river connections to solve water crises in general?

You are absolutely right. Just as the agreement between the states and the implementation of the KBLP center is a very important step in the promotion of ILR and cooperative federalism, the successful implementation of the agreement is important for solving the concept of inter-basin water transfer and solving the hydrological imbalance in the region. The problem is particularly critical in the states and increases water supply in water-scarce/water-scarce areas.

The implementation of large infrastructure projects faces many challenges, such as understanding between parties and countries, financing, R&R and land acquisition, possible environmental impacts, rising costs, excessive delays, and dispute resolution, and many more. This project also affected part of the Panna Tiger Reserve, making it more challenging.

It is planned to implement KBLP as a model project in a time-limited manner to appropriately solve R&R and environmental issues. The project is planned to be implemented through SPV (KBLPA), and the project is assisted by a project management consulting company to use the most advanced technology for effective management and monitoring. The project will be mainly funded by the central government in order to ensure that funds are provided promptly as required.

The project incorporates a very relaxed R&R plan, and has formulated a very comprehensive environmental management plan. The Wildlife Research Institute of India is also under the supervision of the National Tiger Conservation Authority and the Forest Department and is developing a comprehensive landscape management plan (LMP) that not only takes mitigation measures but also enhances the protection and carrying capacity of the PTR.

The project plans to use micro-irrigation systems extensively to improve water efficiency. There are also plans to repair and expand the existing water tanks connecting the canal to achieve inclusive water management in the area. After implementation, water rights accounting, water control, and supervision departments should be established to achieve the best use and management of water resources in the river basin. The project will lead to the comprehensive development and management of water resources in the area and will set an example for other similar projects.

Do You Want To Address The Issue Of Population Displacement And Environmental/Ecological Problems Caused By The Construction Of The Daudhan Dam?

Due to the Daudhan Dam, about 9,000 hectares of land will be inundated, covering about 5,800 hectares of forest land and 3,200 hectares of non-forest land, distributed in 10 villages affecting 1913 families. According to the “2013 Fair Compensation Rights and Transparent Inland Acquisition, Restoration and Resettlement Act”, the Resettlement and Economic Recovery Plan was formulated for these affected families and included in the estimated cost of the project.

The release of the “R&R Plan” includes three main parts, namely, land compensation, resettlement and economic recovery of immigrants, and economic recovery of PAFs who only lose land but do not have houses/houses. The necessary socio-economic impact assessment studies have been conducted, and the amount of compensation has been determined in accordance with the Act and included in the project cost. The cost of the R&R program has been estimated at 673.51 crores rupees, which has been included in the DPR. 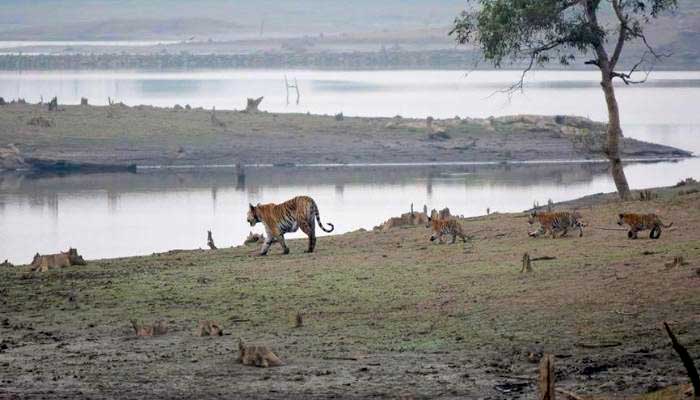 In order to inundate 5,800 hectares of forest land, a comprehensive environmental monitoring plan (EMP) has been formulated to cover the land environment, including watershed treatment before and after the project, biological protection, public health management plan, and air and noise pollution management plan periods which come under the pre and post-project periods. The DPR of the project has allocated Rs 6053 crore as the cost of land acquisition, NPV, CAT, and CA.

According to the decision of the Standing Committee of the National Wildlife Service and the NTCA, in order to mitigate the adverse effects of partial inundation on the Panna Tiger Reserve, the landscape management plan is used to determine the Ken-Betwa Link mitigation strategy that has been entrusted to the Indian Wildlife Research Institute and Dehradun are also being under finalization.

In addition to the above, there are plans to integrate three wildlife sanctuaries, namely Nauradehi, MP’s Rani Durgawati, and UP’s Ranipur Wildlife Sanctuary with PTR to properly protect the wildlife under the tiger sanctuary.

This will allow Tigers to move freely and easily.

Therefore, the purpose of the project is not to only provide water security in the Bundelkhand area, but also to ensure the overall protection of the area, especially for species related to the landscape, such as tigers, vultures, eagles, and crocodiles.

Covid19 Situations Is Really Worse In India, Situation Getting Out Of Control Thus Rajnath asks armed forces to extend help to civil administrations