Don’t get surprised if your electronic devices suddenly start acting weird and even stop responding for a brief period. National Aeronautics and Space Administration (NASA) has announced that a high-speed solar storm is approaching the Earth which is anticipated to meddle with the magnetic field of our planet. The solar storm which is expected to hit later in the day is said to be affecting electricity supply and communication systems around the globe.

On July 3, scientists discovered the solar flare which was flowing from an equatorial hole in the atmosphere of the sun. According to spaceweather.com, the flare is capable of travelling at a maximum speed of 500 Km per second. However, completely matured geomagnetic storms are unexpected, less powerful geomagnetic disturbances can start auroras in the poles. NASA also anticipates that the satellites located in the upper atmosphere of the Earth will get affected. GPS navigation, cellular signal and satellite TV are expected to be directly impacted. Furthermore, solar flares can also disrupt power grids.

Space Weather Prediction Centre of the United States in their latest prediction has warned that the flare can also lead to a high-frequency blackout of radio communications for almost an hour in a large area. The solar flares have been categorized at the X1 level.

What are solar flares? A solar flare is a massive explosion that generally takes place on the surface of the Sun and near a sunspot group. Often the powerful flares are accompanied by a coronal mass ejection. They take place in a power-law spectrum of immensity and release a significant amount of energy up to 10^25 joules. They are mainly associated with the emission of plasmas and particles through the sun’s corona into space. The flares extensively emit radio waves. If the direction of the flares is directed towards Earth, particles which are associated with this disturbance are capable of penetrating through the ionosphere (top layer of the atmosphere) and may spark bright auroras.

See also  The rupee falls below 80 against the dollar, raising worries over imported inflation.

As measured by the Geostationary Observational Environmental Satellite (GEOS) Solar flares are classified using the alphabets A, B, C, and M or X, by the highest flux in Watts per square metre of X-rays with wavelengths ranging between 100-800 picometres. The strength within a category is denoted by a numerical suffix that ranges from 0 to 9. The numerical also denotes the factor for that flare event within the category. For example, X2 flare is two times the strength of X1 flare and X3 is three times the strength of X1 flare and so on.

Solar flares are believed to be strongly influential to the local space weather especially around the Earth. The flares are capable of ejecting highly energetic particles in the stellar wind or the solar wind which is called a solar particle event. These particles can influence the earth’s magnetosphere and can offer radiation hazards to astronauts and spacecraft. Furthermore, the colossal solar flares often come along with coronal mass ejections (CMEs) which can kick-start geomagnetic storms which are capable of disrupting electric power grids on Earth which may extend for several hours. The fainted X-ray flux of the X category of flares multiplies the ionization in the upper layers of the atmosphere.

The X category flare impacts the short-wave radio communication system and is capable of warming the outer atmosphere, thereby increasing the drag on the satellites orbiting near the Earth. This event may lead to the decay of orbits. The super-excited particles in the magnetosphere lead to aurora australis and aurora borealis. The energy emitted in the form of hard X-rays can be destructive and can disrupt spacecraft electronics. Large plasma emissions in the upper chromosphere usually result in emitting such energy.

The radiation threats presented by solar flares are a vital concern in planning human space missions to Mars, the Moon or any other planet. The energetic protons are capable of penetrating through the human body and cause serious biochemical reactions. These reactions may permanently damage the human body and may pose a life threat to the astronauts while travelling in space. To prevent the astronauts from getting exposed to such harmful radiations, some kind of magnetic or physical shielding is required. Often, proton flares take at least two hours to reach the Earth’s orbit after getting visually detected.

Previous instances of the solar flare 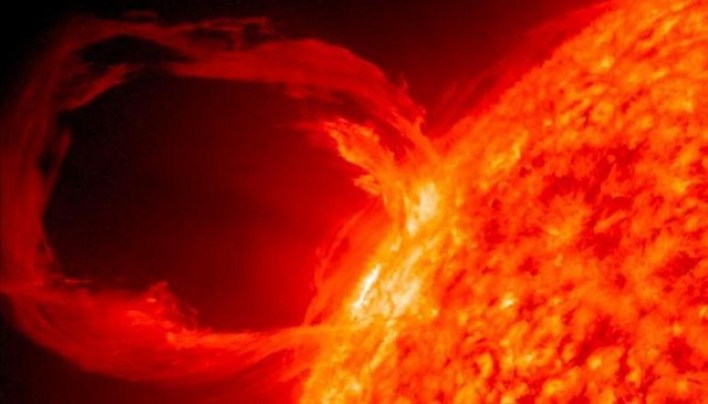 To date, the most powerful solar flare ever observed was the one observed for the first time in 1859 which was reported by astronomer Richard Carrington. The event was also observed by an independent observer. It was named the ‘Solar storm of 1859’ or the ‘Carrington Event.’ It was so strong that the flare was easily visible to a naked eye and produced extraordinary auroras even in the low latitudes of Cuba or Hawaii, and telegraph systems were set on fire. The solar flares left their mark in Greenland’s ice in the form of beryllium-10 and nitrates, which has successfully helped scientists to measure its strength. The intensity of the flare was estimated to be around X50.

In August 1972, ultra-fast coronal mass ejections were suspected of setting off magnetic fuses on naval mines used during the Vietnam War. It would have been a life-risking incident to the Apollo astronauts if it had taken place during its Moon mission.

On 2003, November 4, the largest solar flare of modern times was recorded by instruments. The event disrupted the GOES detectors and hence the solar flare’s classification could not be accurate. At the preliminary stage, after analyzing the GOES curve, it was anticipated to be of strength X28. Later, further analysis of the ionospheric effects suggested that the strength was not less than X45.

In 2013, a major solar flare event was recorded. Within 48 hours, four X-class solar flares were discharged which ranged from X1.2 and X3.2. The flare of X3.2 was one of the largest flares of 2013. These are some of the many solar flare events that the earth has observed over some time. Solar flares of low intensity are common and are not life-threatening.

But, higher solar storms of higher intensity are a reason to be worried about. According to NASA, solar flares are expected to be on the rise over the coming few years because the sun is moving towards the hyper-active portion of its 11-year cycle. Mankind’s more reliability on technology has exposed us even more to the ill effects of solar flares which may cause power blackouts for several hours.

Should I Switch To New Tax Regime? Income Tax Calculator And More!