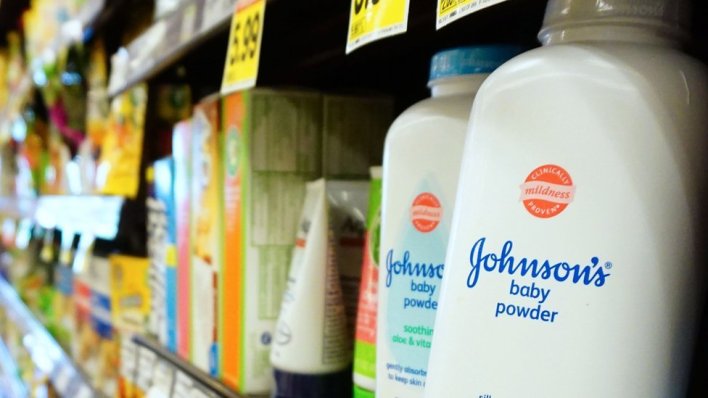 Johnson & Johnson has been ordered to pay $4.7bn (£3.6bn) in damages to 22 women who alleged that its talc products caused them to develop ovarian cancer.

A jury in the US state of Missouri initially awarded $550m in compensation and added $4.1bn in punitive damages.
The verdict comes as the pharmaceutical giant battles some 9,000 legal cases involving its signature baby powder.
J&J said it was “deeply disappointed” and plans to appeal.
In the six week trial, the women and their families said they developed ovarian cancer after using baby powder and other talc products for decades.
Their lawyers alleged the company knew its talc was contaminated with asbestos since the 1970s but failed to warn consumers about the risks.

Talc is a mineral and can sometimes be found in the ground in close proximity to asbestos.
J&J denied that its products ever contained asbestos and insisted that they do not cause cancer.
The pharmaceutical giant added that several studies have shown its talc to be safe and insisted the verdict was a product of a “fundamentally unfair process”.
The US Food and Drug Administration commissioned a study of a variety of talc samples, including J&J, from 2009 to 2010. It found no asbestos in any of them.
The prosecution lawyer told the court that it, and Johnson & Johnson, had used flawed testing methods.
The UK-based ovarian cancer charity, Ovacome, has produced information on the issue. It says that there have been worries for some years that using talcum powder on the genital area may increase the risk of ovarian cancer, but says this has not been proved by research and more studies are needed.

The verdict is the largest payout J&J has faced over allegations its talc products cause cancer.
A previous ruling in 2017 by a California jury awarded $417m (£323.4m) to a woman who said she developed ovarian cancer after using the firm’s products including baby powder.
However, a judge later overturned that verdict and several other legal challenges by J&J are yet to be decided.
Punitive damages are often reduced by the trial judge or on appeal, and J&J has succeeded in having several jury verdicts overturned, some of them on technical grounds.
Source: BBC