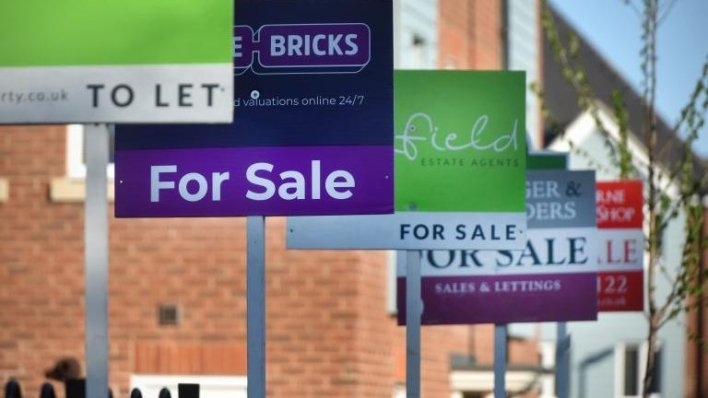 The year-on-year rise in UK house prices accelerated in July, a major lender has said, with the cost of the average home at £217,010.

The Nationwide Building Society said that the annual growth in house prices rose from 2% in June to 2.5% in July.
However the lender said little had changed in terms of the fundamental balance between buyers and sellers.
The future performance of the economy, jobs, and the level of interest rates would be key to the market, it said.
House prices rose by 0.6% between June and July, the lender said.
The Nationwide, which bases the findings on its own mortgage data, said that it expected house prices to rise by 1% over the course of 2018.
“For the past decade we have ridden a rollercoaster of rising and falling prices, but right now it seems to tick up a little one month and tick down a little the next,” said Sam Mitchell, chief executive of online estate agents Housesimple.com.
“On the ground there has been a noticeable increase in properties being listed, and there are still enough sales progressing that the market hasn’t ground to a halt, but they are progressing at a steady rate.
“We should bear in mind that we are in the traditionally quiet summer period for the property market, and the weather has been so un-British like that most people have been outside making the most of it, rather than viewing properties.”

There has been considerable speculation about the possibility of the Bank of England announcing a rise in interest rates on Thursday.
In general, a move in the Bank rate from 0.5% to 0.75% would only have a “modest impact” on households, according to Nationwide’s chief economist Robert Gardner, with those on a variable rate mortgage seeing their monthly bill rise by about £16.
However, there are some households squeezed by debt for whom a rate rise would have an impact, he said.
“For those, some of whom will be on variable rates, any rate rise will be a struggle, even though the impact on the wider economy and most households is likely to be modest,” he said.

See also  This Hyderabad base GST Billing & point of sale app is ruling the market now!

– Amount of the United Kingdom that has housing you can afford

Search the UK for more details about a local area

You have a big enough deposit and your monthly payments are high enough. The prices are based on the local market. If there are 100 properties of the right size in an area and they are placed in price order with the cheapest first, the “low-end” of the market will be the 25th property, “mid-priced” is the 50th and “high-end” will be the 75th.