Autonomous trucking startup TuSimple has completed its first autonomous truck run on open public roads without a human in the vehicle, according to the company. TuSimple’s Autonomous Driving System (ADS) navigated 100% of the 80-mile run along surface streets and highways between a railyard in Tuscon, Arizona and a distribution center in Phoenix, which took place with no human intervention, marking a milestone for the company that aims to scale its technology into purpose-built trucks by 2024, says president and CEO Cheng Lu.

TuSimple’s one-hour and 20-minute drive along the I-10, which is a major freight route that runs from Los Angeles, California to Jacksonville, Florida, fits naturally into the company’s future commercial operations, in part because it has parking facilities set up in Tuscon, Lu said. While the truck did carry pre-loaded cargo, the focus of the pilot run was technological, rather than commercial. Over the last one and a half years, the company has performed 1,800 runs to the tune of 150,000 miles on this stretch of highway, and plans to continue testing its driver-out program into 2022. 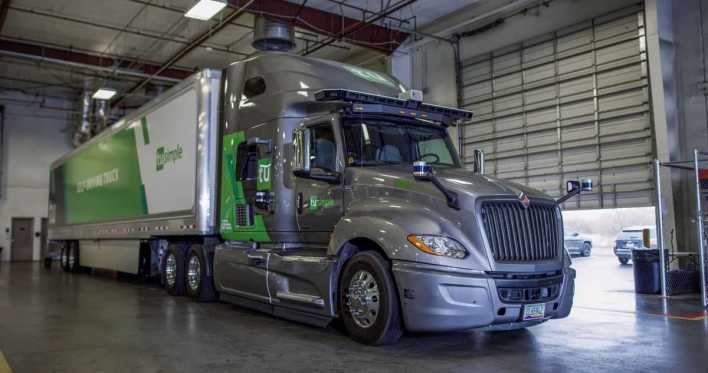 “It’s the logical next step and a key part of this evolution of our technology to have full commercial scale deployment,” Lu told TechCrunch. “We have to have on one route and one type of vehicle the ability to have all the features that you can operate without a driver on the road, and to have the level of reliability that’s required to take the driver out. And that’s significant R&D engineering work. When you can demonstrate that you can safely remove the driver, even on one commercial operator route, it’s no longer a science project. It’s engineering work, and it takes time and capital and a lot of hard work from our team, but we’re very confident that we’ll be the first to have full-scale commercial deployment of autonomous trucks.”

The autonomous trucking startup isn’t the first company to achieve driver-out operations in Arizona, a state with favorable AV testing and commercializing regulations that is trying to position itself as the leader in autonomous driving. Waymo, for example, the autonomous driving arm of Alphabet, has been running driverless robotaxi operations in Phoenix since October last year. Lu reckons highway driving is more challenging than urban driving, where reaction times and abilities to operate the vehicle safely are much simpler because of the slower speed limits. 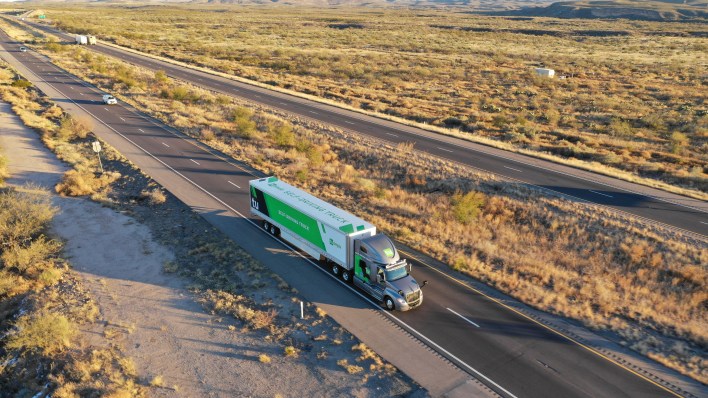 “The challenge of a truck, if you think about an 80,000 pound Class 8 vehicle, it drives on the highway at much faster speeds, like 65 miles per hour, and it’s significantly more heavy and harder to control, harder to break,” he said. “The safety implications, the reliability, are much higher.”

TuSimple’s pilot demonstrates that for at least this operational design domain, the company has achieved Level 4 autonomous technology, which SAE defines as a system that is able to drive itself completely and will not require a human to take over. TuSimple’s Class 8 truck operated under favorable weather conditions between the hours of 9 p.m. and midnight, which Lu says is when many trucks actually do operate. The ADS navigated surface streets, traffic signals, on-ramps, off-ramps, emergency lane vehicles and highway lane changes in open traffic, according to the company.

As a safety precaution, unmarked police vehicles followed at about a mile behind the truck in the event the truck came to an emergency stop. In addition, TuSimple implemented a survey vehicle to look for anomalies operating five miles ahead, as well as an oversight vehicle a half-mile behind that could put the autonomous truck in a minimal risk condition.

“I think what’s important for this industry to move forward is public opinion and our comfort with driverless trucks on the road, and that takes time to build,” said Lu. “To take that first step, it’s important to have a lot of safety precautions.”

TuSimple is currently operating retrofitted base trucks from Navistar, one of the company’s OEM partnerships which was announced last year, but it plans to jointly develop semi trucks specifically designed for autonomous operations by 2024 that it can sell to third parties, says Lu.

“Commercializing driver-out technology means to create a holistic solution that allows autonomous trucks to move freight from terminal to terminal at scale,” said Lu. “We are leveraging autonomous trucks today to move freight with safety drivers and running on fully autonomous mode. This achievement allows us to show we can do so without a safety driver on one route (no human at all). Our next step in commercializing is to add more reliability, which requires purpose-built trucks with OEM partners in order to be able to scale the number of trucks on the road without a driver.” 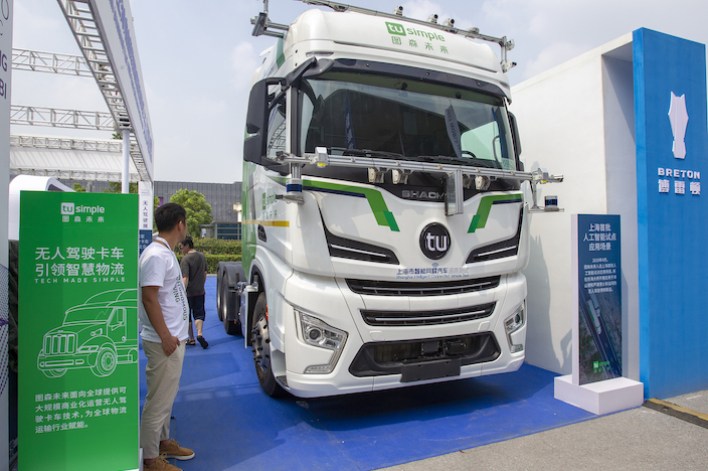 As of mid-December, DHL Supply Chain has reserved 100 of these autonomous trucks to integrate into its operations, bringing TuSimple’s total reservations order to 6,875 trucks. The Traton Group, Volkswagen AG’s heavy truck business, has also penned an agreement with TuSimple to co-develop self-driving trucks. Both OEM partners own minority stakes in TuSimple.

The first generation of the trucks will be built with a steering wheel for certain operations in the yard, like shifting, or the process of separating and shifting the tractor and trailer, which will initially still need to be done by hand, says Lu.

“Ultimately, [reaching L4 capabilities] is what’s required for us to solve the very big problem we’re facing in the freight industry, which is the lack of freight capacity,” said Lu. “On the one hand, the demand for truck drivers and trucks continues to increase with e-commerce and the on-demand economy, but the supply side of things isn’t looking pretty. We have a driver shortage, significant driver turnover, safety costs are getting higher and of course, environmental concerns. All these things are leading to a bottleneck of the supply chain.

How Meituan is redefining food delivery in China with drones