Our former finance minister and senior leader of congress P. CHIDAMBARAM recently posed a question on the “depressing economic crisis” situation in a series of tweets, pointing out that government intervention is urgently needed by the telecommunications and aviation sector. The remark comes one day after a net loss of Rs 15,933 cr in the first quarter of FY 2020-21 was announced by Bharti Airtel.

These two industries are on the verge of collapse and they will affect millions of jobs directly and indirectly.
Ever since the pandemic has started and the lockdown was imposed, India’s economic situation has been getting worse. India was already going through an economic slowdown before the pandemic, and COVID-19 only made the situation worse.

The aviation industry is facing a crisis as many travel restrictions have been imposed and international passenger flights remain suspended as a result of the coronavirus pandemic that has crippled the economy and businesses. The aviation industry has suffered significant losses and faces an uncertain future unless the central government takes action to enact a rescue plan, otherwise, every one of them will go the Air India way.

Even after the operations resumed, demand from passengers remained muted as people were wary about flying. As a result, a lot of airlines give their leased aircraft back to lessors and scheduled operations with a small number of aircraft. New fuel-efficient planes are favored over older aircraft. “The situation continues to be bleak for airline operators around the world and Indian carriers are no exception,” a senior official of a global aircraft leasing firm said.

Airlines resumed operations with restricted availability on 25 May, two months after the grounding. Airlines, however, reported load factors of 44-57 percent in the last week of May due to subdued demand, a far cry from a high load factor before the pandemic. Currently, airlines are licensed to operate at just 33 percent of their total capacity, which will be increased gradually, according to government regulations. Meanwhile, international air traffic remains grounded. In January to May, domestic air passenger traffic dropped by 43.39 percent year-on-year due to the lockdown as per the data from the Directorate General of Civil Aviation (DGCA).
Passenger traffic at Indian airports will remain under pressure in the first half of FY21 and depending on COVID containment a recovery is likely in the second half. Indian passenger traffic is expected to decrease by 45-50 percent in FY21. International travel may rely on countries lifting travel restrictions which are likely to occur in phases.

According to aviation consultancy Capa India, India’s aviation industry is expected to report losses of 3 billion-3.6 billion dollars in the June period. In Q1FY21, domestic carriers will incur losses of $1.75 billion, followed by losses of $1.50 billion-$1.75 billion from airports and concessionaires. Land handling firms may record an $80-90 million loss. Airlines globally will lose more than $84 billion in FY20, the highest in history, while FY21 losses are estimated at $16 billion.

Airlines have focused on reducing costs in the absence of a concrete government rescue program while scaling operations slowly. In addition to finding a cut in rental rates, domestic carriers have approached lessors demanding a deferment on the rentals and, according to industry watchers, have managed to make use of concessions. Domestic airlines also receive volume discounts from suppliers, renegotiate payment terms, and seek a waiver for high-cost components on the annual cost escalations.

Still, until a concrete rescue plan is initiated by the government, this disaster will simply be unmanageable by the aviation industry alone. government intervention is immediately needed.

Similarly Bharti Airtel, one of India’s biggest telecom industry is on the verge of collapse. Bharti Airtel reported a consolidated net loss of Rs 15,933 crore in the first quarter of the fiscal year, largely due to its one-time gross revenue adjusted (AGR) charges and the government seems to have no plan of saving the telecom industry.

The importance of providing a strong telecommunications network during this lockdown was also recognized by the government in the guidelines provided by the Ministry of Home Affairs (MHA) on 24 March 2020, which stated that “telecommunications, internet services, broadcasting and cable services, IT and IT-enabled services (ITeS) are the critical services only (for essential services)” This exemption was also given on April 15, 2020, MHA notification (which extended the lockdown until May 3, 2020) and May 1, 2020, MHA notification (which further extended the lockdown for another two weeks).

The outbreak of COVID-19 and the resulting shutdown came at a time when the telecommunications industry was still grappling with the Adjusted Gross Revenue (AGR) payment problem. Recently, the Supreme Court dismissed the self-assessments of AGR dues conducted by a few Telcos and declined to consider the Centre ‘s submission to require telecom companies to pay the AGR dues for an extended period of 20 years, stating that the matter would be listed in two weeks.

In case the Supreme Court does not grant the requested relief and the Telcos will be forced to pay the AGR in full or without any deferment, the financial effect on Telcos could be serious. If the sales and available cash are not enough to cover the license fees (based on AGR ‘s updated interpretation), Telecos may be forced to accept growing debt to meet demand. Although, given the volatile financial conditions, borrowers willing to extend financial assistance will be low and borrowing costs will be higher (as opposed to the pre-COVID situation), creating a vicious cycle in light of the effects on the industry.

A recent ICRA report also suggests that the amount of debt in the sector, which as of March 31, 2020, had moderated to around Rs 4.4 lakh crore, could rise further to nearly Rs 4.6 lakh crore due to the AGR dues.

Many outstanding problems include the exemption of GST on license fees and spectrum payments received through auctions and the exemption from service tax on the number of license fees payable under the Supreme Court’s order. Although these talks were underway (with the government), the shutdown and the pandemic would trigger a pause in the outcome.

Overall traffic had increased by 10 percent according to news reports and streaming platforms had seen an increase in viewership of 20 percent. Thus, many analysts believed that the telecommunications industry could emerge as the golden child of this economic downturn, unlike the manufacturing and other sectors that have come to a close standstill. However, due to the infrastructure limitations, nothing like this happened.

By March, India’s mean mobile and broadband download speeds had dropped due to network pressure. Accordingly, the Cellular Operators Association of India (COAI) had written to the government asking internet service providers such as Netflix, Amazon Prime Video, and Zee5 to migrate to lower-definition streaming, to eliminate ads and pop-ups, etc., in an attempt to ease the burden on existing networks. To meet demand, the COAI wrote a  letter dated 20 March 2020 to the government to ease standards and speed up approvals to provide facilities, set up towers, and advise state-owned companies (MTNL and BSNL) not to terminate any interconnection points.

To conclude, therefore, it is clear that steps are being taken right now to fix short-term problems as and when they come to light. The government uses a reactive approach but our economy needs a constructive approach to the economic policies and reforms needed. They need to make the fundamentals of the economy strong then only the other issues can be solved. If you are trying to save a dying plant by watering the leaves then no matter how much you water it, the plant will die ultimately. The problem is in the roots and the roots need to be watered and the weeds need to be removed. Similarly, instead of showcasing false acts of dealing with the upfront problems government needs to address the root causes of these problems only then our economy will be able to sustain.

Center says, they may not be able to pay States their GST shares 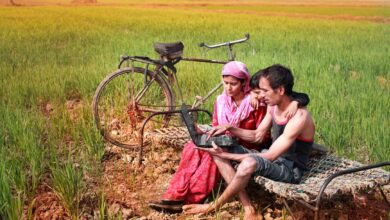