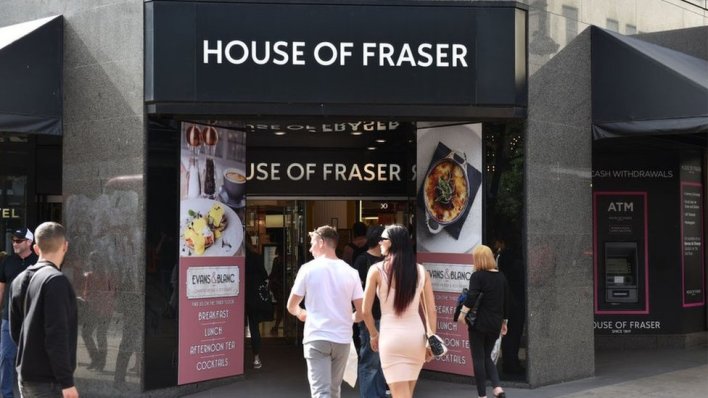 Department store chain House of Fraser is to appoint administrators after giving up the fight to save the business.

In a statement, it said that talks with investors and creditors had “not concluded in a solvent solution”.
House of Fraser employs 17,500 people, including 11,500 concession staff.
Its fate was sealed earlier this month, when Chinese firm C.banner pulled out of a rescue deal that would have brought much-needed investment.
House of Fraser said administrators Ernst & Young had confirmed that the business would continue trading, including all stores and offices, while they attempted to complete a sale.
All 59 shops are set to open as usual on Friday, including 31 that have already been earmarked for closure as part of a restructuring agreement.

The firm said: “Significant progress has been made towards completing a sale of the group’s business and assets.
“The proposed administrators are expected to continue to progress those discussions with a view to concluding a transaction shortly after their appointment.”

Administration is a formal procedure that happens when a company becomes insolvent – that is, its debts are bigger than its assets
The unfortunate firm is put under the management of insolvency practitioners
Once an administration order is granted, all legal action against the insolvent company is frozen for a period of about eight weeks
During that time, the administrator can draw up a plan of action and propose it to creditors during a creditors’ meeting
The administrator takes control of all assets and business operations
Its aim is to act in the best interest of the firm’s creditors, in order to repay as much as possible

Chief executive Alex Williamson said: “We are hopeful that the current negotiations will shortly be concluded. An acquisition of the 169-year-old retail business will see House of Fraser regain stability, certainty and financial strength.
“In the two weeks since the Cenbest and C.banner transaction ceased, the directors have brought forward a number of potential buyers and the group’s financial advisers have run a comprehensive M&A process to identify and then develop other third-party interest that has culminated in the senior secured creditors leading negotiations with parties at a critical pace.”
Chairman Frank Slevin said: “This has been an extraordinarily challenging six months in which the business has delivered so many critical elements of the turnaround plan.
“Despite the very recent termination of the transaction between Cenbest and C.banner, I am confident House of Fraser is close to securing its future.”
Source: BBC

Smart meter deadline 'should be extended'