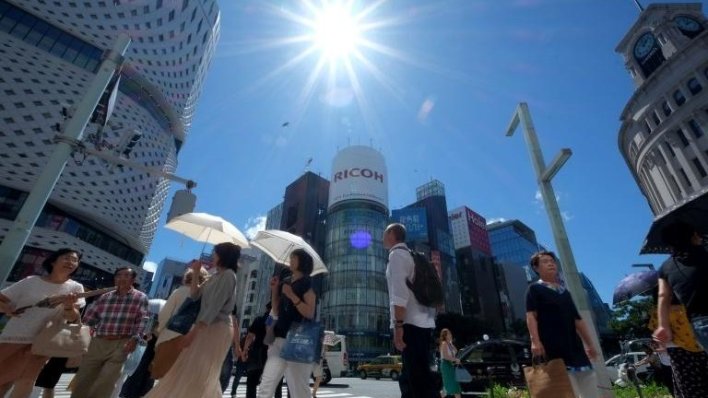 The economy expanded by a faster-than-expected annualised pace of 1.9%, supported by private consumption.
The growth came after Japan’s economy shrank in the first quarter of 2018 for the first time in two years.
The release of the data comes as Japanese officials are in Washington discussing trade amid rising global trade tensions with the US.

Japan’s rate of growth in the April-to-June period beat analysts’ expectations of an annualised rate of 1.4%, and came after the world’s third-largest economy contracted by a revised 0.9% in the first quarter.
Consumer spending underpinned the economy between April and June, but external demand – exports minus imports – weighed on growth.
“While real GDP growth in Q2 was both strong and higher than the consensus forecast, we believe it is reasonable to conclude that growth momentum for the Japanese economy as a whole is gradually starting to slow,” Nomura said in a research note.
The figures came as Japan’s Minister for Economic Revitalisation Toshimitsu Motegi met US Trade Representative Robert Lighthizer in Washington.
Mr Motegi said they had a “frank exchange of views” but reiterated Japan’s position that multilateral talks were the best ways to address trade issues, according to Reuters.
Last year, the Trump administration abandoned the Trans-Pacific Partnership trade deal, of which Japan is a key stakeholder, as Mr Trump carried out a protectionist agenda after taking office in 2016.
The US has since imposed tariffs on many of its major trading partners, and threatened to slap tariffs on all Chinese imports into the US.
As a result, Japan has been focusing on other markets. Last month, Japan and the European Union signed one of the world’s biggest free trade deals, covering nearly a third of the world’s gross domestic product.
Source: BBC

See also  How To Transition From The 9 To 7 Cubical Jobs To Entrepreneurship World?

House of Fraser calls in administrators