Tehran would have an economic oxygen balloon with which to avoid the sanctions of the Trump Government and Beijing would be able to consolidate its New Silk Road.

Iran and China are committed to sealing a strategic agreement that would involve Beijing investments of 340,000 million euros in the Islamic Republic in exchange for oil and gas at a competitive price. With this great pact, Tehran would have an economic oxygen balloon with which to avoid the sanctions of the Donald Trump government after the withdrawal of the nuclear pact. Beijing, for its part, would manage to consolidate its New Silk Road and deliver a coup of authority against the United States in the Middle East.

Both countries have been negotiating a pact since 2016 by which Tehran agrees to supply Beijing with hydrocarbons at a competitive price in exchange for China investing up to 400,000 million dollars (about 340,000 million euros) in the country’s battered infrastructure. On June 21, Tehran approved the draft, which must now pass into Chinese hands. 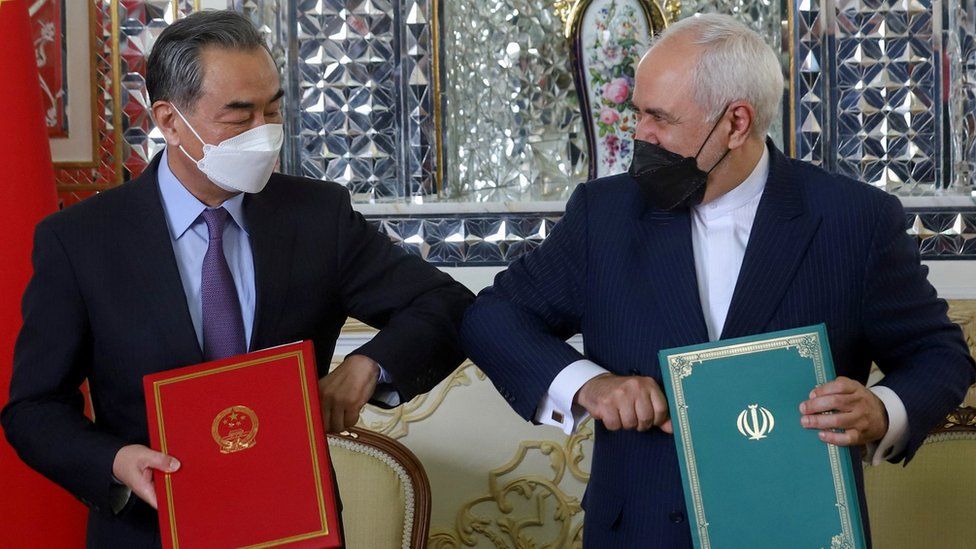 Iran and China committed to sealing a strategic agreement

The Iranian government has yet to present the document in parliament, which has amplified fears that there are many transfers to Beijing. Even some Iranian parliamentarians accused the Government of having the intention of handing over to the Asian giant the island of Kish, located in the strategic Persian Gulf; and to authorise the presence of 5,000 Chinese soldiers in Iranian territory. Mohamad Javad Zarif, Iran’s foreign minister, had to appear in the Chamber to deny it. The Chinese side, for the moment, remains silent and it is unknown if it has signed the agreement or the date when it will do so.

Iran’s geo-strategic situation, between the Caspian and the Persian Gulf, and its oil and gas reserves make it ideal to be one of the essential links for China and its great project of the New Silk Road. This plan constitutes a series of investments in the infrastructures of more than 60 countries and its central section passes through Iran. The Iranian government has published the broad lines of the agreement on the Internet, which includes a long list of collaborations in hydrocarbons, petrochemicals, transport, energy and security.

According to the Petroleum Economist magazine, Iran would indeed be willing to make huge concessions to China, including discounts of up to 32% on hydrocarbons and the possibility of delaying payments for two years. The draft lists nearly 100 investment projects, including the construction of airports, high-speed trains and underground lines and infrastructure for Chinese 5G, which pits Beijing against Washington.

The idea of ​​a 25-year strategic agreement was conceived after Chinese President Xi Jinping’s visit to Iran in January 2016. With Washington’s departure in 2018 from the nuclear agreement, which was also signed by Beijing, and the reimposition of sanctions From the US, Chinese companies left the Iranian market and it seemed that the plan would not work. But China continued to import Iranian oil, although trade between the two fell to $ 23 billion in 2019, a third less than the previous year. Now Beijing is reaching out to Tehran, which is urged to find a powerful partner to break out of economic isolation and counter US pressure. Iran needs investment and renew its oil industry and cannot count on the support of Russia, a geopolitical partner in the region (compared to the United States and Saudi Arabia), but with whom it competes as an exporter of hydrocarbons.

Ali Aghamohammadi, the economic adviser to the government, said in July that “Iran must increase its crude production to 10 million barrels a day and needs a strategic client so as not to eliminate itself from the oil market.” In light of the draft, it appears that this “strategic customer” will be China.

China detects COVID-19 in a shipment of Brazilian chickens: an unusual situation