Kamala Harris, a senator from California known for her ardour and firmness, will be the running mate of the Democratic candidate for the White House. She could become the first Black-Indian-Immigrant-descent-woman Vice President of the United States.

A man, a woman. A white, a Black. A veteran of East Coast politics, a prominent West Coast senator. By choosing Kamala Harris as running mate in the race for the White House, Joe Biden has made the choice of complementarity and security. 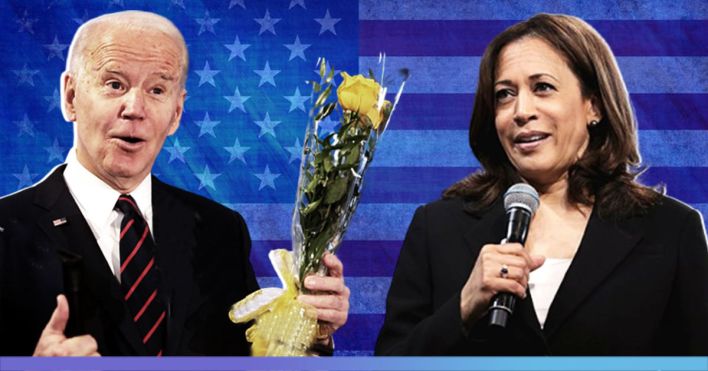 Kamala Harris made history on Tuesday when she became the first black (of Jamaican father) and Asian (of Indian mother) woman to run for the United States. Joe Biden kept the suspense going for a long time, even though his choice ultimately fell on who was the favourite from the start – many in Washington were even discussing the ticket before Joe Biden’s candidacy for the primary.

“Kamala Harris has a chance of becoming the first female president of the United States.”

A ticket all the more important this year gave that, given Joe Biden’s 77th birthday, the post of the vice president could be a springboard towards candidacy for the White House in 2024, or even towards an arrival at the Oval Office earlier if the Democrat was not finishing his term. Kamala Harris, 55, with her initial experience running for the primary, therefore stands a chance of becoming the first female president of the United States.

Kamala – her first name means “lotus flower” – Harris is a child of immigrants. Her father came to the United States to study economics and ended up teaching it at Stanford University, while her mother worked in breast cancer research. Her parents separated when she was five years old.

“A career prosecutor, she climbs all the rungs to being elected attorney general of California, then-senator of the same state.”

With her mother and sister Maya, she grew up in Berkeley, California, and Montreal, Quebec, before attending Howard University – the college of Black American elites – in Washington. She then returned to California to pass the bar. A career prosecutor, she rose through the ranks to being elected attorney general of California and then senator of the same state, a post she still holds today and not in danger till November.

“Her reputation for severity during her career as a prosecutor has earned her the sympathy of the centrist camp and some anti-Trump Republicans.”

Her reputation for severity during her career as a prosecutor has earned her criticism from the left of the Democratic Party and the Black Lives Matter movement which fights for reform of the criminal justice system. But this same image of firmness earned him the sympathy of the centrist camp and some anti-Trump Republicans. A given well understood by Joe Biden, who wants to gather beyond his own camp to take it in November.

If Kamala Harris is more classified in the camp of the moderates, she nevertheless espoused several very progressive proposals during the primaries, such as universal public health insurance. Donald Trump has already prepared a nickname for his new target: “phoney” Kamala (which could be translated as “false” or “hypocrite”).

However, Kamala Harris stood out for her charisma and her sense of repartee during debates in the Democratic primaries. His main target was Joe Biden, who sheepishly bore the brunt of his segregation-themed attacks at school. This combative character could in the coming weeks make it possible to counterbalance certain weaknesses of the Democratic candidate who tends to blunder and sometimes has difficulty responding to invectives. Kamala Harris will take on the very stoic Vice President Mike Pence in a debate that promises to be epic.