This AI-powered art app lets you paint pictures with words

The reality-bending powers of AI have been kept increasingly busy over the past decade. We’ve had computer vision-powered 3D dioramas; trend-setting style-transfer; viral photorealistic selfie-tuning, selfie-retouching, face-swaps and — ofc — deepfakes; and plenty of frivolous (and hilarious) fun with selfie filters (ohhai ‘Disneyfying’ cartoon lens!) in between.

AI-powered visual remixing has shown, again and again, it can grab attention. Although keeping ‘eyes on’ once the novelty of an AI-generated effect wears off can be harder. (Selfie retouching apps don’t have that problem, mind; there’s perpetual demand for machine learning as a reality enhancer.)

What’s most notable about developments in AI-enabled synthetic media over this period is how much speed these visual effects have picked up, helped by ever more powerful mobile processing hardware. 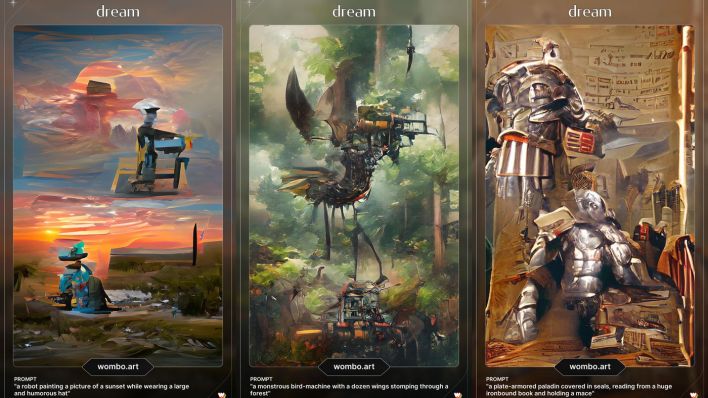 Wait times for a finished result can now be essentially instant — a game changer for productizing (and potentially monetizing) the creativity and power of neural networks and GANs (Generative Adversarial Networks). Aka, the machine learning frameworks doing the retouching, reframing or indeed generative modelling, jumping off of a human prompt for their inspiration.

And while most of the app-based visual remixing of the past decade has focused on retouching/restyling/augmenting vs pure-play AI-powered image generation, that too is changing.

Wombo, a Canadian startup which grabbed earlier eyeballs for its eponymous AI-enabled lipsyncing video app, recently launched another app, called Dream (iOS and Android), which uses AI to create original “artworks” — based on a text prompt.

It’s super, super simple: You simply describe what you want it to paint — say ‘A terrifying tree’ or ‘The worst sandwich in history’ — pick a style from the selection offered (Mystical, Baroque, Fantasy Art, Steampunk etc), or opt for “no style”; and hit create.

Then, in literally a few seconds — I counted <20 — the app displays your finished ‘artwork’.

You can’t even get bored during these few seconds of creation because you get to see a glimpse of the AI at work: The app shows the modelling’s rapid-fire evolution — from starter marks, through a few inhumanly fast additions fleshing out the canvas, to arrive, practically breathless, at another finished composition.

Some of these generated artworks look kinda impressive. Some… not so much.

But of course no two prompts generate the same image. So you can keep asking for a new image from the same prompt until you like the look of what you see. Everyone is an ‘artist’ now.

That said, actual artists should have less to worry about. Not least because art made by a human brain and body is only going to increase in value once the world is awash with ‘machine art’. (Just as every NFT minted dilutes the meaning of the phrase “digital art” )

While its ‘style’, if it can be thought of having a single overarching style in the midst of so much pastiche, tends more to the abstract and distorted vs the specific and precise. So portrait requests won’t be rendered photorealistic. And it’s typically more comfortable depicting the fantastical than the actual. (A ‘Madonna and child’ prompt served a work closer to an infamous Spanish church restoration fail than a crypto-Botticelli, for example.)

But the sheer speed of production is impressive. Slash terrifying. As soon as a fresh artwork appears, the app wastes no time in trying to sell it — popping up an option to “buy print”, which links to its web shop and looks like a neat way to turn a visual trick into actual revenue. (It’s offering “Custom Wombo Dream Print[s]” that start at $20 for a matte poster or $45 for a framed print.)

If the startup can turn ~20 seconds of processing into $20+ of revenue that could make for a nice little money pipeline.

By the end of last month 10M+ images had already been generated by users. (While the Google Play app has had over 1M downloads already, a month or so after launch.)

Happy to announce the (pre)release of WOMBO Dream!

Albeit, most people have finite wall space on which to hang any kind of art, let alone imagery generated by, er, a mindless machine — so most of these random creations will stay firmly virtual. (‘AI art’ could be perfect NFT fodder, though…)

Where ‘AI art’ will fall in the fashion/cultural value stakes is certainly an interesting question to ponder.

It’s superior to clip art or stock photos, sure. And the Dream app’s output can also be more interesting than the average ‘art’ print you could buy in IKEA. But results can also be rather queasy — or derivative — or naff — or just plain odd.

And, well, is it art? Or is it just a visual output of a mathematical process? An abstraction of human creative skill that can’t translate real emotion or a sense of identity or soul because code doesn’t have any of those things? It’s just doing what it’s told.

And do you really want to hang a coded abstraction on your walls?

I mean, maybe? If it’s especially aesthetic. But, well, is that art or just wallpaper? Maybe Wombo should be selling rolls of Dream AI wallpaper or printed mouse mats and t-shirts (merch), rather than ‘art’ prints…

A few things are clear: AI-generated art is incredibly fun to play with. It’s a sort of visual catnip. A toy for the imagination.

It’s also, undoubtedly, here to stay. And AI models will keep getting ‘better’ — depending on what we mean by ‘better’ around such a subjective subject as art. (Maybe generative art models will serve more successful results by bringing the user more fully into the creative process — giving them tools to customize and manipulate machine outputs so they can be (fine)tuned until they’re closer to whatever the person was imagining, or else feel more personally unique and meaningful. Or, in other words, a more hybrid creation process may make for more powerful and moving art-ish outputs.)

There will also be scores of these arty AIs, each producing different ‘flavors’ and ‘characters’ of visual output — derived from their training data. Or even — if you like — art AIs with different ‘styles’. (But perhaps ‘specialisms’ is closer to the coded mark.)

There are a number of other GAN-based image generation AI tools out there — and I confess to being a big fan of Pixray‘s system (the pixel art outputs are especially cute) although its processing speeds are much, much slower — but Wombo appears to have been quickest to the punch to appify and monetize this tech.

The next decade of reality-bending machine learning will be quite the trip.

I have now gotten enough of a taste of AI-powered creative tools to know that they’re going to be much better than even the AI optimists think.

So cool to just think of ideas and iteratively have the computer implement and build on them.