Schulz, who made the famous comic strip Peanuts, couldn’t have known that the world would need both love and chocolate domino in the months after March 2020 when he talked about them in the same sentence.

During a lockdown, people in India ordered more than just chocolates from their homes.

During a time when every other business was struggling, this helped quick-service restaurant chains like Zomato and Swiggy stay in business.

We discussed how Jio’s almost-free strategy helped the company get customers who stuck with them. There, Jio changed or adapted to get into the market.

But during the pandemic, when the market changed and more people ordered from home, it was easy for QSR chains to get more people to think about them.

After Covid-19, companies have started to grow their footprint by 10–15 percent each year by adding new products and services. The pandemic is making many young people pay attention to hygiene and safety, which will help organized players even more.

But why hasn’t all of this helped the stocks of the top QSR companies?

Since the beginning of the year, Jubilant FoodWorks, which owns the master franchises for Domino’s Pizza, Dunkin’ Donuts, and Popeyes, and Westlife Development, which runs McDonald’s, are down more than 20% and 5%, respectively.

So, what’s next for quick-service restaurants?

The world of QSR

In India, Jubilant FoodWorks and Westlife Development are two of the most important companies that run QSR chains. Both companies focus on fast service, ease of use, and reasonable prices. This includes sub-formats like dine-in, delivery, and takeaway.

As of FY20, Domino’s, owned by Jubilant FoodWorks, had about 19% of the market, while McDonald’s only had 7%. With a profit after taxes (PAT) of INR437.52 crore, Jubilant FoodWorks seems to have found the secret to success, as its biggest competitor, Westlife Development, lost INR4.24 crore in FY22.

But a loss doesn’t make Westlife or anyone else feel sad. Experts are optimistic that these chains will take a more significant share of the market for food services.

The arrival of international brands like Domino’s and McDonald’s in India in the mid-1990s led to the rise of the quick-service restaurant (QSR) format. It helped India’s unorganized food services industry grow.

See also  Google will shut down Google Hire in 2020

Data from the red herring prospectus of Sapphire Foods, which runs KFC, Taco Bell, and Pizza Hut, shows that India’s domestic consumption has grown at a CAGR of 11.1% from FY14 to FY19. During the same period, the US’s consumption increased by 4.3% and China’s by 8.2%.

At the same time, India’s food services industry was worth USD56.5 billion in FY20, with the unorganized sector accounting for about 40% of that. People think that, over time, a large portion of this 40% will move into the organized space as more well-known consumer brands enter the market and help this segment grow.

Also, about 38 percent of the money people spend on eating out goes to quick-service restaurants, 31 percent to casual dining restaurants, and 14 percent to cafes. Because QSRs are easy to get to, have low prices, and offer deals through restaurant aggregators and online ordering apps like Zomato and Swiggy, people spend a lot of money on them.

Demand is high, and the amount spent per person is currently low.

Shortly, India’s spending will likely increase, and some of the most prominent American brands are hopeful. 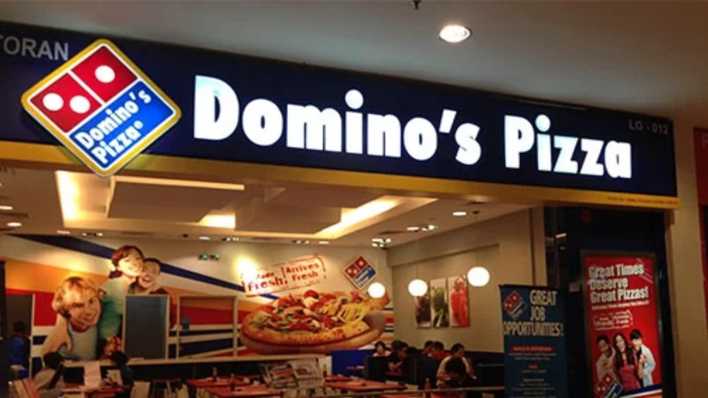 Domino’s pizza, the biggest pizza delivery chain in the world, sells more pizzas in India than in any other country outside the US. Domino’s Pizza India, run by Jubilant FoodWorks and owned by the Bhartia family, now makes and sells more than 12 crore pizzas yearly. This is about twice as many pizzas as McDonald’s sells in India.

People feared Covid-19, so they stayed inside and worked from home. Jubilant FoodWorks’ net profit for the September quarter went up because its Domino’s Pizza app was downloaded many times.

The company’s consolidated net profit for the quarter ending in September 2021 went up by 3.8% to INR75.7 crore.

In an earnings call after the March quarter, Domino Jubilant FoodWorks said that even though prices went up, the demand outlook for QSR chains is good. The company opened 80 new Domino’s stores in one quarter, the most it had ever opened in one quarter, and 17 new cities, bringing the total to 337 cities by the end of FY22. In FY22, a total of 230 stores and 48 new towns opened. The company’s Q4FY22 sales increased 12.9 percent from last year (YoY) to INR1,158 crore, and this was due to both delivery and dine-in channels. Its PAT rose by 11.7% from the previous year to INR117 crore.

Inflation is stable right now, advertising spending will continue to support aggressive growth, and there doesn’t seem to be any worry about lease rental costs right now, said Domino Jubilant FoodWorks in a management commentary on July 18, 2022.

The company’s net profit for the quarter that ended in March was up 11.3% from the same time last year. It wants to open 250 new stores by the year 2023.

The share price of Domino Jubilant FoodWorks, on the other hand, has been a letdown.

The stock has done much worse in the past year than its sector and indices. Jubilant FoodWorks fell 3 percent and hit an intraday low of INR547 on BSE after the company said that its consolidated net profit for the quarter ending in March 2022 fell 8.8 percent to INR96 crore. Higher expenses caused this drop, and Domino’s same-store sales growth (SSSG) has also decreased over time.

Domino Jubilant FoodWorks has been under constant pressure during the last six months to sell through delivery.

Even though most QSR sales, worth INR16,800 crore for FY20, come from Mumbai and Delhi, the tier-I cities are increasing. Between FY17 and FY20, sales for QSRs in Delhi-NCR and Mumbai grew by 15% to INR16,800 crore, while sales in tier-II cities grew by 19% to INR17,700 crore, according to Sapphire Foods RHP data.

Westlife is very aware of this.

The recipe for Westlife Development
Even though there were business restrictions in January 2022, the owner and operator of the master franchisee of McDonald’s restaurants in west and south India reported substantial numbers with an SSSG of 23 percent YoY. In Q3FY22 and Q4FY22, the restaurant chain operator had its best sales, and in Q4FY22, McDelivery had its best deals.

As the business world continues to be unstable, rising inflation and a lack of inputs due to geopolitical situations worldwide remain a problem. Even with all of this, the company is sure it can get through these tough times and deliver robust and long-term growth.

As part of its plan to grow in tier-II and tier-III cities, the company opened new restaurants in Vellore, Bhilai, and Bilaspur in Q4FY22. Sales were better in the first few weeks than in its metro restaurants.

In Q4FY22, the company also opened 13 new Experience of the Future (EOTF) stores. EOTF stores now make up 36% of all restaurants.

There are currently 118 EOTF stores in total. Amit Jatia, the vice-chairman of Westlife Restaurants, the company that runs McDonald’s in South and West India, says that the company has seen a “full recovery in the dine-in business.” In the March quarter, same-store sales grew by 26%.

In the next three to four years, the company wants to add 200 stores.

Even though inflation is rising, Jatia said McDonald’s wouldn’t raise prices by more than 5% this year.

The pandemic gets worse.

With this growth, changes come risks that could cause problems for anyone in the food industry if they are not overseen. We talked about how Jubilant Foodworks and Westlife development are doing worse than they were at the beginning of the year.

The stock of Domino Jubilant FoodWorks has dropped by almost 25%. Are the rising costs of oil and flour cutting into the profits?

On the other hand, price-to-earnings data from the last three years shows that Jubilant FoodWorks is trading at a good level of about 85x, compared to a high of 269x in January of last year. So, was Jubilantly overpriced, or should a value investor take another bite?

The average goal for Westlife from brokerages is INR604.33. From the last price of INR516.15, the consensus estimate is that the price will go up by 17.08 percent. Few brokerages say that you should buy this stock.

Going back, the shares of both companies almost tripled during the pandemic, but this only lasted for a short time. As the pandemic got better, so did their growth. Some things are hard to get used to. But will the bump go away?

In conclusion
In one of its reports, ICICI Securities said, “Outlook on growth and margins remains attractive for the QSR sector, unlike the rest of the consumption space, where uncertainty reigns.”

For investors, one of the near-term unknowns about Domino Jubilant FoodWorks is that the brokerages are watching the stock. An analyst at Edelweiss wrote about Westlife Development, “The Westlife Development stock has been under pressure since its highs in October. Strong growth in the convenience format and an increase in margins would help the company’s finances. The company raised prices in May 2022 to offset the rising costs of raw materials. However, we think a more efficient supply chain and a better mix of products would help it improve its margin profile and return ratios even more.

QSRs could grow a lot in the coming years because they have much to do and more to offer. Many people will be very interested in this business sector.

India's Luxury Car Sales Are Booming in 2022: Why?

Netflix Lost its Subscribers, But Why Are Viewers Unsubscribing And Switching Off Netflix