E-commerce sites Snapdeal, Flipkart and Paytm Mall are among top e-tailers who sell counterfeit products, according to a survey conducted by LocalCircles.
Around 37 per cent of the respondents took the name of Snapdeal while 22 per cent blamed Flipkart for shipping counterfeit products. Paytm Mall and Amazon too had 21 and 20 per cent of the shipping shares.
Around 19 per cent of the consumers said they received fake products in the last six months. Consumers have received the highest number of counterfeits from eCommerce sites in fragrances and cosmetics category, added the survey.

Identifying fake product is also an issue for consumers as 69 per cent consumers opined that they did not know how to identify a fake product and just trust the e-commerce platforms blindly. Only 16 per cent claim to know how to identify fakes, claimed the survey. Smaller cities consumers face these issues more often in comparison to metros ones.
About 78 per cent consumers feel counterfeit activity on e-commerce sites will reduce if details of the sellers are published. Around 98 per cent citizens want e-commerce sites to blacklist sellers for the category that they are selling counterfeit products in. 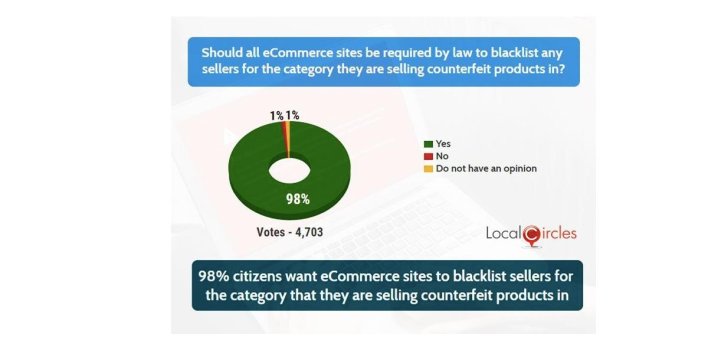 Globally, selling of fake products is a huge market amounting to almost $500 billion per annum.
Recently, the Drug Controller General of India (DCGI) issued notices to leading e-commerce portals like Amazon and Flipkart for allegedly selling spurious and adulterated cosmetics.
Earlier in December 2017, the US-based footwear brand Sketchers had filed cases against Flipkart and four sellers on its platform for allegedly selling its fake products.
Source: Entrackr
To Read Our Daily News Updates, Please visit Inventiva or Subscribe Our Newsletter & Push.