Prashant Bhushan, a public interest lawyer in Supreme Court held guilty of contempt was fined a mere amount of Re.1 by the top court. Prashant bhushan. If he fails to pay the fine by September 15, he can face serious jail time for three months and a ban from practicing law in the Supreme Court for a hefty period of 3 years. “Freedom of speech cannot be curtailed”, said the Supreme Court while handing down the sentence to him, referring to “sane advice” from Attorney General KK Venugopal to the court and to Prashant Bhushan. Prashant Bhushan, photographed holding a mere Re.1 coin, announced at a press conference: “I propose to submit to the order and respectfully pay the fine of 1 rupee”. He jokingly said in a tweet, “My lawyer and senior colleague Rajiv Dhavan contributed 1 Re immediately after the contempt judgement today which I gratefully accepted”.

Do The Crime You Do The Time:

Prashant Bhushan posted his views on Twitter that were critical to senior judges and also to the honorable Supreme Court insinuating slightly bad things about them. He said that he had always believed that the Supreme Court is the “last bastion of hope for the weak and oppressed” and that he planned on hurting the judiciary the way he did and but wanted to express his anguish for it. The Supreme Court asked for an official apology from Prashant Bhushan said in a statement that they gave several opportunities for the lawyer to express regret but he didn’t seem to show any signs of remorse. Following this statement, Prashant Bhushan not only gave wide publicity to the second statement but also gave various interviews to press. The court was clearly referring to Prashant Bhushan’s statement refusing to retract his comments or apologise, saying he considered it the discharge of his “highest duty” and that apologising would hold his conscience and the court in contempt.

The controversial tweets are: “CJI rides a 50 Lakh motorcycle belonging to a BJP leader at Raj Bhavan Nagpur, without a mask or a helmet, at a time when he keeps the SC in Lockdown and denying citizens their fundamental rights to access Justice!”.”When people in the coming future look back at the last six years to see how democracy has been destroyed in India, they will particularly mark the role of the Supreme Court in this destruction and the role of the last 4 CJIs even more so”.

The bench comprised judges Arun Mishra, BR Gavai and Krishna Murari who passed out the verdict. It was after numerous arguments that this verdict was passed against Prashant Bhushan when he refused to apologize. In the latest hearing on August 25, the court said that it was painful to read Bhushan’s statements. “This is not the way a senior lawyer like Prashant Bhushan over 30 years of experience should behave” Arun Mishra said.Over the past few years the Supreme Court and it’s judges have faced a number of complaints. A group of lawyers started a protest for Sexual Harassment of Women at Workplace Act. Their campaign was to remind the judges that the rules apply to themselves as they do to others. For an institution that is supposed to act as a safe haven for people seeking justice, the judges of the Supreme Court of India have far too long gotten away with charges such as sexual harassment against them. A number of women have been prone to sexual harassment in the past few years. Even though they registered complaints, most of those complaints were rejected and the person in power(accused) was exonerated. 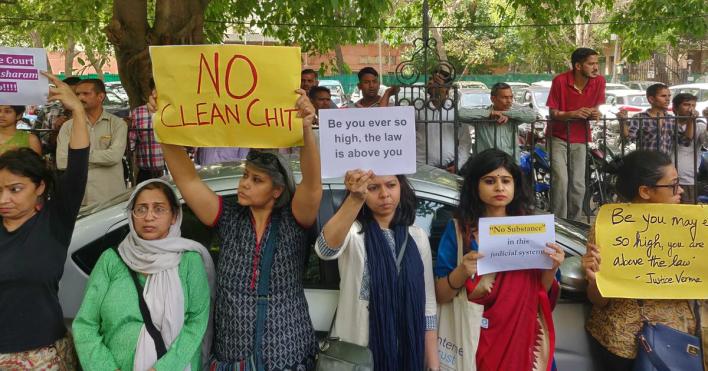 Even though no one had the guts to speak up against them, Prashant Bhushan set a milestone by insinuating about the crimes of the past CJIs. This resulted in him being fined a mere pocket change of 1 rupee.

Prashant Bhushan accepted those contempt charges against him and accepted to pay the fine of 1 rupee. The Supreme Court said that “just because you do a hundred good things doesn’t give you the moral high ground to do 10 wrong things”. Even though the judges of the Supreme Court have been accused of a number of wrongdoings, every one of them have been exonerated just because it’s a higher form of justice body. The Supreme Court has lost its credibility which has placed a lot of scrutiny on them. Will the crimes against lawyers recede is yet to be found out in the years to come.