After the world bank and India’s central bank -the Reserve bank of India– another financial institution has now projected a severe contraction that there is negative growth for the Indian economy for the forthcoming fiscal year. The International Monetary Fund expects India’s gross domestic product (GDP) to contract by about minus 10.3 percent for the financial year 2020-2021. And this is because to a very large extent it claims to be caused by the lockdown brought about by the coronavirus. This has made the Indian economy plummet to record levels especially in the first quarter where India’s economy had contracted by minus 23.9 percent. It is also being said that the Indian economy is likely to rebound by registering about eight-point percent growth in the next financial year. In its biannual world economic outlook report, IMF has said that all emerging markets and developing economies are expected to contract this year including the emerging economies of Asia, such as India and Indonesia that will continue to contract in this pandemic, till the time they bring the pandemic under control. In its last forecast in June, IMF has said that the GDP was weaker than projected in India where domestic demand has plunged following a very sharp compression in consumption and also a collapse in investment.

On Tuesday, Chief economist of the IMF, Gita Gopinath had some bad news. “We continue to project a deep recession in 2020 with global growth projected to be minus 4.4 percent, therefore we see that the recovery from this catastrophic collapse will likely be long, uneven, and highly uncertain. 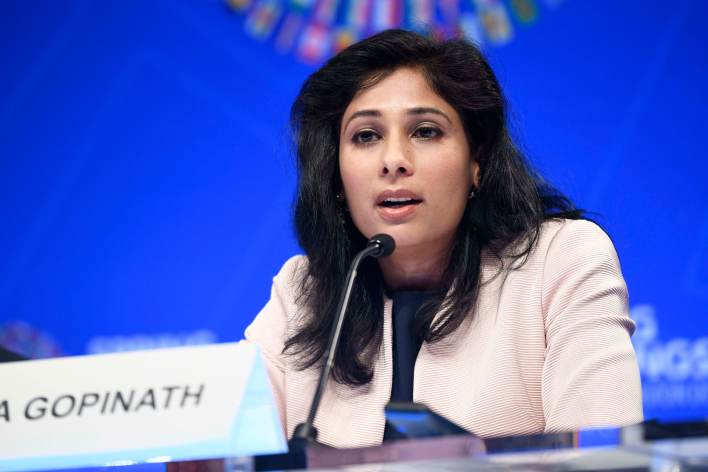 “In our latest world economic outlook, we continue to project a deep recession in 2020. Global growth is projected to be minus 4.4 percent which is a small upgrade from June. We have a significant downgrade for India’s growth for the fiscal year 2020-2021 and it’s minus 10.93 %. The hit to the economy has been large and pretty much broad-based”

The Indian GDP had contracted by a jaw-dropping minus 23.9 % in the April to June quarter, making it the worst-performing economy among the G20 countries. The reserve bank of India has predicted that the economy will contract by about minus 9.5 percent for the fiscal year 2020-2021 with a mild expansion that is expected in the economic activities in the March quarter. The world bank also made a similar projection that India’s economy will contract by about minus 9.6 percent for the same fiscal year. The IMF has also pretty much said that there will be an overall contraction of about minus 4.4 percent in 2020 than what it did earlier envisaged in June at about minus 5.2 percent. Without naming India, the IMF chief economist Gita Gopinath said that the emerging markets in the developing economies are managing this crisis with a lot fewer resources as many are constrained by elevated debt and higher borrowing costs. These are testing times for the global economy. The IMF has predicted a deep global recession in the days ahead. The IMF says, the world growth will contract by close to 5 percent and it recommends taxing the rich.

The global economy will fall into a deep recession this year with the road to recovery increasingly looking uncertain. The economic crisis triggered by the coronavirus will leave deep scars. Job losses, bankruptcies, mounting debt, and loss in output will lead to a loss of a whopping 28 trillion dollars by 2025. To bounce back the IMF recommends that the world economy must swallow the bitter pill. It wants countries with large data levels to tax the rich. The pandemic could leave a mountain of debt behind. The pandemic response will bring debt levels of countries close to a hundred percent of global output. Countries that can’t pay back could default on their payments several major countries are at risk. Before the pandemic major economics used to borrow beyond GDP levels. This includes Japan, where Gross Data accounted for 235 percent of the GDP in 2017. By 2018, Italy’s debt accounted for 132% of its GDP. America’s debt accounted for 104% of its GDP. France, Canada, and the UK have about 98%, 90%, and 87% of its GDP respectively. The IMF says governments with high debt should consider raising taxes in the affluent taxing purchases of high-end property and taxes on capital gains and wealth.

“This is the worst crisis since the great depression and it will take significant innovation on the policy front both at the national level and at an international level to recover from this great lockdown. The challenges are daunting but there are reasons to be hopeful” – IMF report

The IMF projects that China will be the only global economy to register some growth this year and all major emerging economies are expected to contract. India is expected to face its worst contraction on record by more than 10 percent. The IMF wants the government to limit the bleeding by cash transfers, wage subsidies, and unemployment insurance but the question is where will the money for that come from? Well, it cannot be the only solution. Higher 6taxes for the rich might be inevitable if governments around the world run short of ways to raise more cash.

The IMF has said that the biggest worry right now is that we are not doing enough to support the economy until we have a durable exit from the health crisis. With interest rates being record low, IMF suggests that the government can borrow and inject which could lead to recovery but a more potent higher productivity-based growth and with that, they will be able to reply to what they have acquired. But this cannot be the case for low-income countries already in debt distress and that’s why it is so important that we make sure that they are provided with relief and they are supported with grants and concessional financing which is the big theme for the annual meeting of IMF. They further explain that the situation today is less dire than it was a couple of months ago but dire, nonetheless. The big problem we are facing right now is that we are not out of the woods of the pandemic yet and until that happens, we have to be concerned about whether there is sufficient support for firms and workers so we don’t hit the wall of massive bankruptcies and a massive increase in unemployment.

Modi Led Central Government Doesn't Have Funds To Give GST Share To States, But Much Willing To Give Loans To Them! Isn't It Absurd? Here's All You Need to Know Before You Fall Into The Government Trap!

With Huawei Out of Sight, Korean Tech Giant “Samsung” Gets Ready To Seek World Technological Dominance