Almost 200,000 deaths. Read the number again. The virus so far has claimed so many lives that it pains to even write the number. And the worst part is, this number is not just a number anymore, they’ve become names. Names of people that we know, our loved ones, our acquaintances.  We criticise the government on a lot of things and more often than not, they get away with it. Their dictatorial policies, indifference about people’s needs, poor handling of the economy and so many issues that this government has caused over the past few years, we have still let them go. But how do we let go of the deaths that this government has caused? How do we forgive them for the lives we have lost? How do we not hold them accountable for the dead bodies of people lying on roads just because there isn’t enough space on cremation grounds?
Every two minutes across our homes, we hear an ambulance pass by. It is heart-breaking and saddening to the core. The crisis has claimed the best of us and we cannot just think straight. However, note that we started off as a pandemic, the fact that it is now a crisis is on the government’s head and you bet we’re not letting it go this time. We are here to question their lethargy, their ill-planning, their bureaucratic incompetence, their populism and hyper-nationalism- all of it. Because this time, it is not about what the previous government did, not about religions, not about any stupid conspiracy that the government has constantly led us to believe- it is about people. Our people have died because of not having enough beds in the hospital, not having enough injections to get through, not having an oxygen supply to help them breathe and most of all, not having enough planning to save them from the crisis in the first place.
We haven’t forgotten the government boasting about being the “pharmacy of the world”, nor have we gotten over the federal health minister declaring the pandemic to have entered its “endgame.” It’s these pointless boasts that have led to us standing at a point of exponential deaths and necessity shortages because the government apparently assumed the fight was over, despite experts time and again reminding the second wave to be on its way. It’s this attitude of the government that has led to this poor planning and incompetency. The pharmacy of the world is now suffering shortages of vaccines itself with states left only with a few days’ supply. Why is the government trying to get manufacturing started of the Bharat Biotech’s Covaxin at a Rs 904 crore vaccine plant in Chengalpattu, three months after the vaccine’s regulatory nod? No wonder the country is facing a vaccine shortage. So, what do we call this, assumption that the pandemic was over or just plain lethargy?
101 days after the first two vaccines were approved in India, the central government decided to waive the requirement of bridging trials in the country for vaccines approved in Europe, Japan, and the US etc. Why was the same decision not undertaken in December last year when the Pfizer mRNA vaccine applied for it? World Health Organization guidelines say that such “bridging trials” may be needed “if there are compelling scientific reasons to expect that the immune response to the vaccine, and therefore its efficacy, could be significantly different to that documented in a prior efficacy trial.” Well, looks like the government does not even care to justify its strange xenophobia anymore.
And how do we explain the government’s ignorance towards the new mutants and virulent strains emerging from the country when the government was busy talking about “bending the COVID-19 curve like Beckham”. Call it ignorance or sheer arrogance in the face of a pandemic, the result is what we’re heartbreakingly witnessing right now. Oh, and if we start by counting the supreme leader’s incidents of ignorance, well, we’d be sitting here for a long, long time. The extent of PM Modi’s Indian exceptionalism bred complacency can be seen evidently in the leader’s indulgence, or rather a mask-less indulgence, in campaigns and rallies in the pandemic raged country in the month of April, when the country was crossing the 2-lakh everyday case mark like it was nothing. The lack of preparedness in vaccine production, incompetence in health infrastructural facilities and extensive delay in action steps have caused the country to sink deep in this crisis situation and the government just does not seem to do anything about it. Why is the government not taking accountability? Why is it now stringently vocal about it? How long do we have to wait before the government realises the pandemic needs much more than what they’re currently doing by their “Mann ki baat” every now and then with nothing but the same old conversations and no action steps? 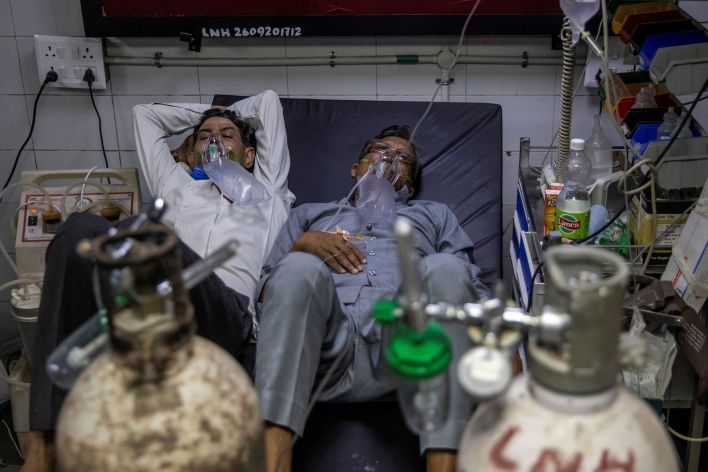 Oh, and the level of petty that this government has is unmatched, even at the time of crisis. I mean, what justification do you give for countering a very credible economist’s advice on inoculation drive and other things with the same old political finger-pointing just because he belonged to an opposition party? Sometimes, it just feels like taking a sigh and asking these government leaders to grow up, because we’re dying because of their insecurities. And staying true to their typical tendencies, they put the onus on state governments to clean the centre’s mess.
So, when we say this exponentially large death toll was avoidable, we mean it. When we say the government’s ignorance, arrogance, xenophobia, incompetence and overconfidence were responsible for the condition we are in right now, we mean every word of it. And it has to stop now. The government has had enough share of running from accountability, now we as citizens need to make sure that the next time it comes to them, they run behind votes just like this and like we didn’t get our answers, solutions and help, they should not get the power either. Long gone are days when they could play the dividing game, we’re united now and well, we can see more clearly than ever.

See also  Covid-19 vaccine for children aged 5 to 12: a critical examination of the essential problems, from safety to cost