The most popular Chief Executive Officers in the United States, whose companies donate millions of dollars to politicians through political action committees, are speaking out on contentious political issues, aligning with progressive causes, perplexing some politicians, and posing fundamental questions about the role of a business in society.
From where did this issue begin?
The notorious legislation passed by the Georgia state legislature restricting voting rights is the most recent flashpoint. The law’s supporters believe that the new laws would eradicate voter fraud, which has become a major concern in the wake of former US President Donald Trump‘s accusations of a rigged election, but opponents say it would harm the poor and minorities. Also, there is no evidence of any kind of deception.
Two African American business leaders, Merck CEO Kenneth Frazier and former American Express CEO Kenneth Chenault, encouraged corporate America to resist the limitations, and 72 African American business leaders agreed. After some hesitating, two big employers in Georgia’s capital, Atlanta, the airline Delta, and the coffee manufacturer, Coca-Cola, all opposed the law. Since then, 200 firms have signed a resolution condemning ‘discriminatory laws’ in other nations, including HP, Salesforce, Amazon, BlackRock, Google, and Under Armour.
The announcement was made in full-page advertisements in major daily newspapers. According to the Brennan Center for Justice, five bills limiting voting rights have also been signed, and 55 more conservative bills are pending in 24 states. Many corporations have said that they would not participate in states that restrict voting rights. According to Jeffrey Sonnenfeld, a senior academic at Yale University who helped convene a video call on the topic to which thousands of CEOs participated, it is voter intimidation. The corporate leaders of today do not like being ordered (by politicians). Sonnenfeld told CNBC that these influential people now have a voice, and it counts, and the American public deserves to hear it. Make no mistake, this is a significant moment for American business. Bennett Freeman, who served as the State Department’s deputy assistant secretary for democracy, labor, and human rights under the Clinton administration, said that American business leaders understand that they have an existential interest in the rule of law and accountable government.
Trump’s presidency sharpened corporate determination to act. Christine Bader is the author of Evolution of a Corporate Idealist and has collaborated with major companies. An idealist would like to believe that the previous administration’s excessive egregiousness demonstrated that certain bright red lines cannot be crossed when it comes to existential challenges to our democracy and that businesses must be on the right hand. So, what has heightened corporate commitment to act? What are the threats that companies face as a result of these decisions, and why do many people believe they should think twice before intervening? Finally, where does this leave Indian businesses, which are dealing with a slew of pressing issues? 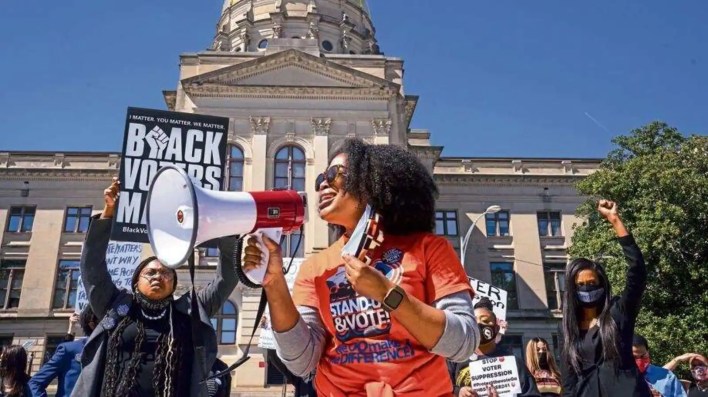 What were the trigger points which made corporates reactive?
The US corporate leaders have, of course, criticized Trump’s administration proposals, including travel bans on certain countries (mostly Muslim nationals), anti-refugee policies, Paris Climate Agreement withdrawals, H-1B cuts, and restrictions on visa requirements. Four years of Trump built an environment in which businesses became more likely to give public comments because of the US administration’s aggressive policies, said David Schilling, senior program analyst at the Corporate Responsibility Interfaith Center.
It was simpler for CEOs because what corporations had to do was raise quarterly results, according to John Sherman, a retired senior lawyer at a global conglomerate who has thought widely about corporate responsibility. They must now consider a larger number of stakeholders, or face losing their social license to work. These activities are being taken for a variety of purposes by corporations. They despise workplace conflict, and these problems have riven the United States. Another is the issues that are essential to millennials. James Crabtree, a former Financial Times correspondent in India and author of The Billionaire Raj, a book about India’s golden age, said: “Large corporations are risk-averse.” Their political statements appear to represent their customers’ opinions rather than leading them. However, there are a few exceptions to this law. According to Wilton Henisz, a professor at the University of Pennsylvania’s Wharton School, political posturing has risks, such as splitting the business world into Red (Republican) and Blue (Democratic) companies. Of course, several executives, such as Michael Lindell, the CEO of My Pillow, have openly endorsed Trump.
As recently as October of last year, Trump had received five times the amount of money from American CEOs that Biden had. Big business has historically supported Republicans who believe in low taxation and minimal oversight. That is why Republicans have been taken aback by business activism on social issues. Mitch McConnell, the Senate Minority Leader, accused the CEOs of running a woke shadow government and alleged severe repercussions, but he later backtracked. Several reasons contribute to corporate dissatisfaction with Republicans. Employee and customer pressures both play a part. Furthermore, businesses value continuity and predictability, and Trump provided none. Republicans have threatened childish retaliation, such as taking away Delta’s diesel tax break and criticizing Major League Baseball (MLB) for moving a major game away from Atlanta.
Republicans are losing ground with big businesses. More than 60 businesses, including Airbnb, Amazon, American Express, AT&T, Walmart, BlackRock, Walt Disney, and Charles Schwab, have announced that they would no longer donate to Republican lawmakers who voted against certifying Biden’s victory. In the United States, chief executives had more prestige than writers, professors, pastors, and politicians combined.
How intrigued are today’s American CEOs?
According to a Harris poll, the percentage of Americans who think CEOs should speak out on critical social issues increased from 59% in 2019 to 68% in 2020. According to the Edelman confidence barometer, 54% of employees believe their CEOs should speak up on topics that matter to them, and 53% of customers believe brands should get interested in at least one topic that has little to do with their business.
According to Aaron Chatterji, a professor at Duke University’s Fuqua School of Business, there are three explanations why businesses are speaking out: “Increased political division makes it impossible to hold the middle ground; the rise of social media demands instant responses to binary questions and places where silence is conspicuous, and is considered to be their millennial employees’ tastes.”
Corporate outbursts are also a product of political inaction. Surya Deva, a member of the United Nations Working Group on Business and Human Rights, argues that the private sector is filling the void created by the government. He explained that staying silent has a price. Companies should take principled stances and avoid becoming involved in politics, he says, since they lack the authority to do so.

See also  As inflation soars, these are the top 10 cheapest states in America to live in.

Election Commission of India and High Court: A pretentious saga