Forest Fire’s are playing havoc since the beginning of 2020 and have continued to light up and cause massive destruction. It started with the Amazon Forest Fires that burned uncontrollably in Brazil, so much so that it led the world to get up and notice and question the Brazilian government’s inaction towards the forest fires.

Many hectares of the precious rain forests were totally burnt even as smoke billowing from the forest fires could be seen for miles around. Then came the news of forest fires raging in the United States; even as thousands of firefighters were deployed to control the raging fires, thousands were evacuated as the fires, despite all efforts, could not be doused.

Back home, India, too, had a serious case of forest fires as they raged in the upper Uttrakhand region in 2020.

Australia too saw massive Bush fires leading to a real crisis as many animal species – Kangaroos, Koala Bears and many other native species were affected by these raging fires.
Both citizens and the animal board continued to rescue animals, some of them suffering from burns. The United States has again been engulfed with Forest fires raging in and across California and Nevada region. This is being touted as one of the largest wildfires destroying multiple homes and forcing tens of thousands to evacuate and spend nights in shelters.
More than 80 large wildfires in thirteen states have destroyed more than 1.3 million acres in the last few weeks.
Even though the firefighters were battling day and night to control the blaze, the fire spread so ferociously that it was making its own weather!

Clouds were generating lightning strikes across the region; however, the officials successfully contained a fifth of the fire parameter, but the extreme nature of the fire and low humidity is making the task of dousing these fires difficult.
Thousands have been evacuated from the nearby counties, even as the smoke from the fires is travelling far and wide and is even reaching the neighbouring state of Oregon. The smoke from these fires is blocking sunlight, and the officials fear that the rising temperature and the dry weather in the coming weeks might make things even more brutal.

While the fire tenders have been working tirelessly, there is also the breakout of Covid -19 cases amongst many of the fire tenders. With long summer months ahead, it would be a challenge to control, contain these fires. 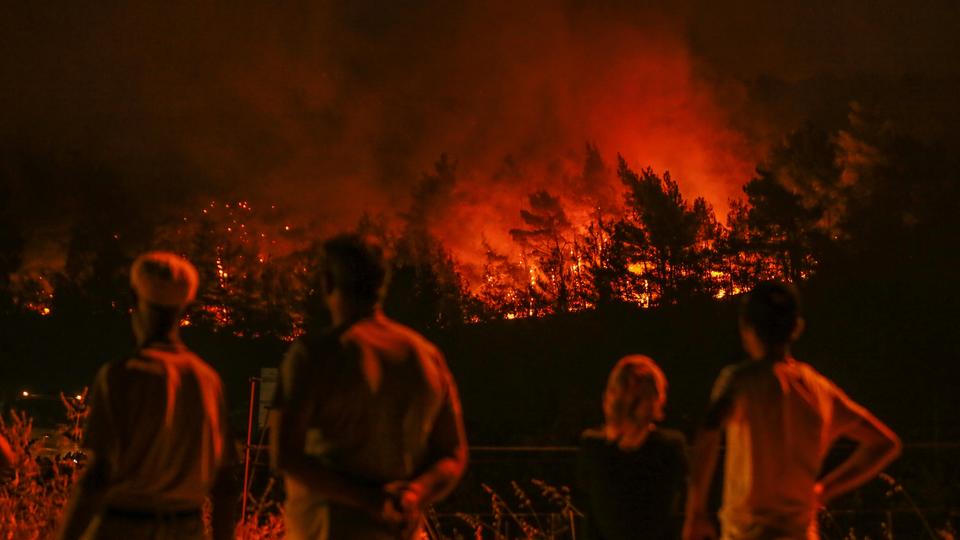 Forest Fires in Turkey
The latest country battling wildfires is Turkey, which has been burning for the second consecutive day in southern Turkey.
More than 100 people had to be evacuated even as reports of three people dying in the fire pour in.
Both hot weather and strong winds have caused the fire to spread around the town of Manavgat, which s 75 km east of the resort tourist city of Antalya and nearby villages.
Turkey has pressed a firefighting plane, a drone, 19 helicopters, roughly 250 vehicles, and approximately 960 personnel to contain the blaze.

Turkey‘s southern Mediterranean coast, a popular tourist attraction for both local and international tourists, is famous for its scorching heat, which often causes wildfires; however, officials have stated that the latest fires are the biggest to date.
Television footage of the area showed burnt residential buildings and people fleeing across fields as firefighters backed by helicopters battled it out to extinguish the fires.
Like some other countries, Turkey has been facing extreme weather conditions, which triggered floods last week, killing six people. Earth’s Vital Signs Deteriorating
Leading scientists have sounded the bell saying that earth’s vital signs are slowing; this means that we are now seeing the tipping point of climate change.
These scientists have said that the governments of countries have failed to address the environmental concerns, such as pollution, mass deforestation, and poisoning our oceans; the exploitation of our planet has reached a stage where we might have gone beyond the tipping point.

The scientists have come to this conclusion as they studied key metrics of planetary health like greenhouse emissions, glacier thickness, Sea ice Extention, deforestation, and others. Of 31 vital signs, the scientists found that 18 of these –
Co2 and Methane levels hit an all-time high in 2021, despite the reduction in pollution due to the pandemic.
Ocean heat and Sea levels set new records.
The annual loss rate of the Amazon Rainforest hit a 12 – year high.

The climate tipping point can be witnessed as the rapid glacier and ice melt in Greenland and the West Antarctic ice sheets, which is now irreversible for centuries to come.
These changes will only continue and at a much faster rate than before unless and until the use of fossil fuels is stopped entirely, switching to plant-based diets, i.e., eliminating meat entirely from our diets and stabilizing the human population.

Question – is humanity capable of making such changes and sacrifice even if it means that the planet dies, which ultimately means that humanity too will be wiped out steadily in times to come?
Can the world as a whole recognize that a critical overhauling is needed in the way we operate and lead our lives, or else the cost to pay is too high – it is the planet itself!

Decidedly, we are standing at a cusp, or a fork in the road ahead; one leads to devastation if we were to continue in our current path and the other slow perhaps, but the only viable solution is to stand up and make the right choices, even if that means letting go of our luxuries, our convenient way of life.

For the price to pay in terms of climate change and resulting devastation from the same would not only lead to loss of lives and property, but for the coming generations, it is inevitably going to lead them to a much harder life and a question on their minds what have the previous generations done?