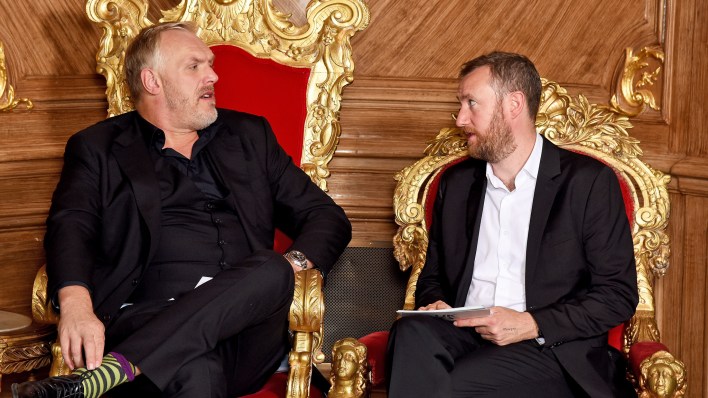 Fans of Taskmaster and Red Dwarf have expressed their frustration after Dave was one of 10 UKTV channels to be dropped by Virgin Media in a fees row.

About four million households using the cable company are unable to watch the comedy shows – or channels like Gold.
Virgin says UKTV charges “inflated” fees, and complains that its joint owner, the BBC, does not allow all channels to be shown on demand.
UKTV says it cannot accept the “drastic” price cut Virgin proposes.
Five UKTV channels – Dave, Drama, Home, Really and Yesterday – are broadcast on free-to-air services Freeview and Freesat – and it also has the paid-for services Gold, Alibi, Eden, Good Food and W.

All were removed from Virgin cable boxes at midnight on Saturday after talks between the two companies broke down.
Virgin subscribers tuning into the channels in recent days had seen a message warning that they would be disappearing.
Some new channels have been added, however, including the Paramount Network, IQTV and FreeSports.

Taskmaster, a comedy panel game show featuring Alex Horne and Greg Davies began on Dave in 2015 and is one of its most popular shows.
The opening episode of the sixth series – in which Alice Levine, Lisa Tarbuck and Tim Vine were among the celebrities undertaking bizarre challenges – attracted an audience of 1.175m viewers.

Dave’s other big success has been its revival of cult sci-fi sitcom Red Dwarf, commissioning four new series since of the show since 2009, after screening repeats of the BBC original.
A further series – Red Dwarf XIII – has also been commissioned but will not be seen on Virgin unless a new deal is struck.
Gold shows classic comedy including Only Fools and Horses, Porridge and The Vicar of Dibley, while Australian crime drama Harrow is shown on Alibi.

Some Virgin Media customers have taken to social media to say they may cancel their subscriptions, while others said they would do so if the channels did not return.
On Twitter, Darren Woodward said he was “gutted” not to be able to see Taskmaster, while Tom Langdon was one of a number of subscribers to wonder whether his monthly bill would be reduced because they could no longer watch the show.
Richard Blunt from Birmingham told the BBC: “Practically all the stations we watch on Virgin have now been withdrawn.
“I think we will give it a couple of weeks, hoping that the decision is reversed, before deciding whether to stay or to go.”
Diane Moore said she was thinking of swapping after years of being a Virgin customer, and Ben Underwood urged Virgin to “sort it out” before the next series of Red Dwarf.
Only Fools and Horses fan Helen Iles is among several people to contact the BBC to express their disappointment at lack of notice Virgin gave its viewers.
“As a Virgin Media customer for many years I feel disappointed that I have had no previous warning, especially when I recently changed my plan,” she said.
Mike Shingleton from London said: “This whole affairs stinks. We were given only 24 hours notice about the loss of these channels.
He said the replacement channels “do not reflect the quality or subject matter of those lost”.
Linda Robertson from Nottingham she was “livid” after only having found out about the changes through Twitter, adding “there are so many people who can’t continue watching their favourite shows” including her 90-year-old mother.

What are Virgin Media and UKTV saying?

Virgin Media chief digital entertainment officer David Bouchier said company was prepared to restore UKTV’s free channels “immediately” with its permission.
He said UKTV had been willing to let it continue carrying the free channels but at the “11th hour that offer was withdrawn and that is why we have the chaos today”.

“We have been in extensive discussions with UKTV but we have not been able to reach an agreement which reflects the reality of how people are watching television in the 21st Century,” he added.
“UKTV is insisting on holding back its channels, like Dave, which are freely available over the air and online, unless we pay inflated sums of money for its paid channels like Gold.”
UKTV chief executive Darren Childs said: “We’re hugely disappointed for the many customers who are losing out because our channels are no longer available through Virgin Media.
“We completely understand their frustration and would love to continue to bring them the shows and channels that they’re so passionate about, but we need a fair price to support our growing investment in programmes.”
All UKTV channels are available on Sky, BT and Talk Talk subscription services.
Some programmes, including Taskmaster, are also accessible online via the UKTV Play website.

Are you a Virgin Media customer? What does the loss of Dave, Gold and the other UKTV channels mean to you? Please email [email protected]
Please include a contact number if you are willing to speak to a BBC journalist. You can also contact us in the following ways: