At least 16 bodies were recovered from the wreckage site of the Tara Air plane that crashed in Nepal’s mountainous Mustang district on Sunday with 22 people on board, including four Indians, minutes after taking off from the tourist city of Pokhara, authorities said on Monday.

The turboprop Twin Otter 9N-AET plane belonging to Tara Air went missing on Sunday morning in the mountainous region of Nepal. The Canadian-built plane, flying from the city of Pokhara to the popular tourist town Jomsom in central Nepal, was carrying four Indian nationals, two Germans and 13 Nepali passengers, besides a three-member Nepali crew.

In a statement, the Civil Aviation Authority of Nepal (CAAN) said 16 bodies have been recovered from the wreckage of the ill-fated plane in the country’s Mustang district on Monday. 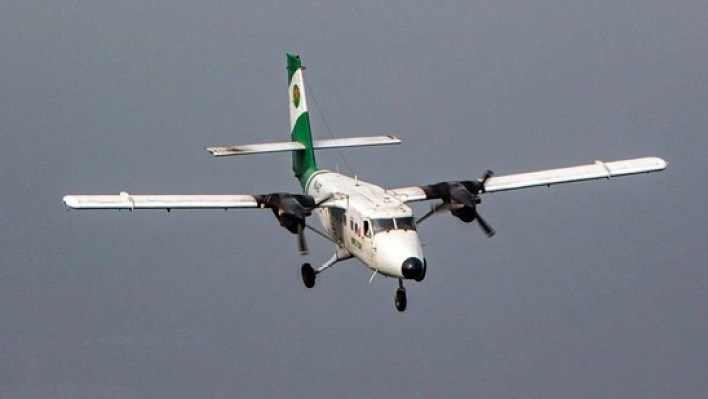 “According to the information received from the crash site, the bodies of 16 people have been recovered and are yet to be identified,” it said.

It said that the plane had crashed at Thasang-2 in Mustang district at the height of 14,500 feet.

Inda Singh, who was on his way to clear a blocked road, found out that the plane had crashed. He said the plane was found in a completely damaged condition, MyRepublica newspaper reported.

“All the passengers on the aircraft are found dead, he was quoted as saying by the paper. “The dead bodies are intact and the faces of all victims are recognisable.”

Singh said that there is a problem in collecting the bodies as they are in a nearby ditch.

He said there was no fire on the aircraft. The aircraft could have met with an accident after hitting a cliff nearby.

The airline’s passengers list identified four Indians as Ashok Kumar Tripathy, his wife Vaibhavi Bandekar (Tripathy) and their children Dhanush and Ritika. The family was based in Thane city near Mumbai.

Pieces of the wreckage of the aircraft were found after nearly 20 hours since the plane went missing, the Nepal Army said on Monday.

Crash site: Sanosware, Thasang-2, Mustang, he tweeted along with a picture of what appears to be the wreckage of the aircraft. Lt Mangal Shrestha, a police inspector and a guide have already reached the site, he said.

“Other rescue team members from different agencies are trying to reach the sites using small helicopters. Every possible means to reach the site is being considered,” Brig Gen. Silwal said. 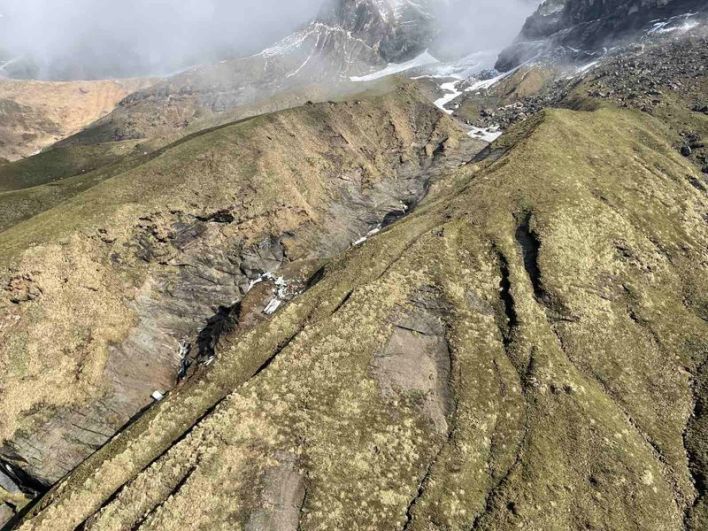 The plane took off at 9:55 am from Pokhara and lost contact with air control about 12 minutes later at 10:07am, according to the Civil Aviation Authority.

Sudarshan Bartaula, a spokesperson of Tara Air, said: As the bodies have been scattered over a 100-metre radius from the main impact point, the search and rescue team is collecting them.”

The plane slammed into the mountain breaking into pieces, said Bartaula.

The impact has blown the bodies all over the hill, he said.

The photo posted on the social media site shows the tail and one wing of the aircraft remain intact.

As the area can accommodate only one chopper at the crash site, it is shuttling the rescuers, said Bartaula.

The search was suspended on Sunday because of bad weather and failing light.

Nepal, home to eight of the world’s 14 highest mountains, including Everest, has a record of air accidents.

In 2016, all 23 people aboard were killed when a plane of the same airline flying the same route crashed after takeoff.

In March 2018, a US-Bangla Air crash occurred at the Tribhuvan International Airport, killing 51 people on board.

A Sita Air flight crashed in September 2012 while making an emergency landing at the Tribhuvan International Airport, killing 19 people. 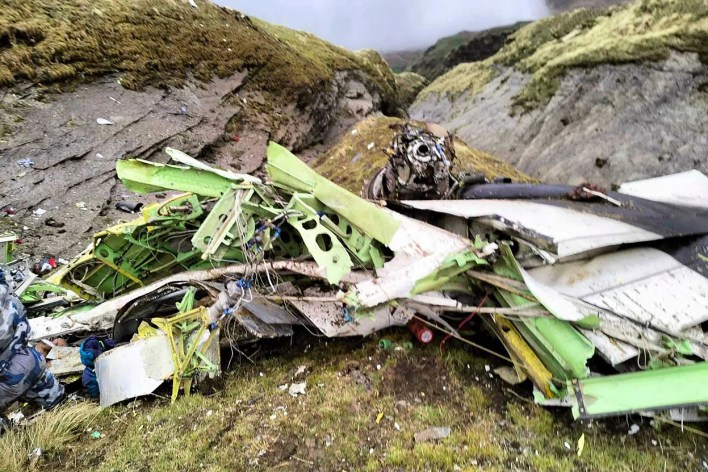 A plane flying from Pokhara to Jomsom crashed near Jomsom airport on May 14, 2012, killing 15 people.

Tara Air is the newest and biggest airline service provider in the Nepalese mountains, according to the airline website. It started its business in 2009 with the mission of helping develop rural Nepal.