On Monday, the US announced a diplomatic boycott of the Winter Games

Beijing has threatened to retaliate against a US diplomatic boycott of the 2022 Winter Olympics in Beijing. 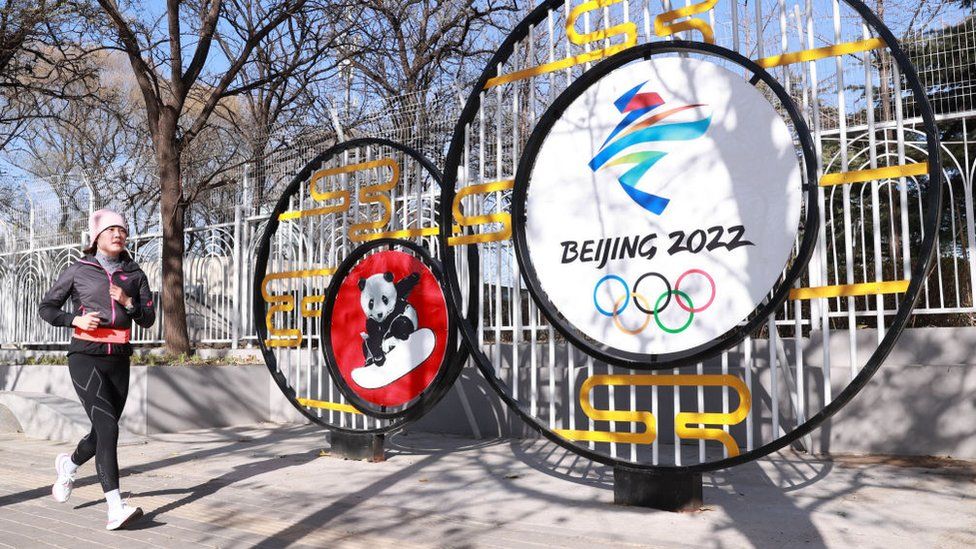 In a statement, Zhao Lijian, a spokesman for China’s foreign ministry, said the country would take “resolute counter measures”, but did not elaborate.

As a result of concerns about China’s human rights record, the US said it would not send diplomats to Beijing.

As a result, US athletes could participate, and the government would support them fully.

At a press briefing on Tuesday, Zhao said that the proposed boycott was “based on rumours and lies” and accused the US of violating “political neutrality in sport”.

Both countries are experiencing high tensions. China has long denied its accusation of genocide against the predominantly Muslim Uyghur minority in Xinjiang, but the US accused China of genocide during its repression of that minority.

Chinese relations are also strained because China suppresses political freedoms in Hong Kong and concern over tennis player Peng Shuai, who has been missing for weeks since accusing a top government official of assault.

Due to “serious doubts” about Ms Peng’s safety, the Women’s Tennis Association halted all tournaments in China last week. High-level government officials usually attend the Olympics, including those from the United States and other countries. Earlier this year, the First Lady led the delegation of the United States to the summer Olympics in Tokyo.

Jen Psaki announced on Monday that the United States would not participate in the ‘frenzy’ surrounding the Olympics. She said that sending no delegation to the 2022 Games could send a clear message.

In the face of grave human rights violations and war crimes in Xinjiang, US diplomats and officials would treat these games as a matter of course, she said. It’s not possible.

According to Ms Psaki, the US government does not believe it is justified to “penalize athletes who have trained for this moment”.

Since Tuesday morning, search results for the topic ‘US diplomatic boycott of Beijing Winter Olympics’ have been censored on the Chinese social media platform Weibo.

State media outlet Global Times also deleted most of the comments below its announcement, leaving only eight out of close to 1,500 words intact.

It’s the Olympics that matter, not politics! Even if you boycott, you’re hurting your countrymen (and athletes),” read one comment on such a site.

China attempted to take the sting out of this by dismissing such action as irrelevant in the last few days.

The IOC and Beijing have no plans to invite any dignitaries because of the Covid restrictions. The decision will be derided as yet another manifestation of the mentality of the Cold War.

The US president or any other executive branch member was improbable to attend any games hosted by the government he has accused of genocide.

One senior US diplomat I spoke with the months before this decision told me the US would try to educate its athletes about what is happening in Xinjiang and Hong Kong. Interspersed between Beijing’s events, they envisioned athletes having “fireside chats.”

What about the UK? In private conversations, British Foreign Secretary Liz Truss is reported to have said just that when it comes to President Xi Jinping’s Communist regime. Will it now follow suit?

One government official, intimately involved in China policy, said that if the UK joined a boycott, it would be perceived as a “poodle” of the United States.

Both Democratic and Republican politicians praised the diplomatic boycott in the US. Nancy Pelosi, the Democratic House of Representatives speaker, said the US and the world could not proceed as if there was no problem with hosting the Olympic games in a genocide-ridden country.

Republicans such as Senator Tom Cotton argued that the diplomatic boycott was not sufficient and that the US administration should have boycotted “fully” the games.

Other countries, including Canada, have considered the move. Raab said the decision to boycott would be made “in due course.” However, he would not attend the games personally. Japanese and Australian officials have discussed the boycott.

After China downgraded relations with Lithuania in response to a dispute over Taiwan, Lithuania announced it would boycott the Winter Olympic Games this week. Taiwan considers itself independent, and Beijing considers it part of China.

Consequently, New Zealand has decided not to attend due to concerns about the ongoing Covid-19 pandemic.

As a diplomatic boycott, the Biden administration’s boycott of the 2022 Winter Olympics comes nowhere near 1980’s Moscow Olympics boycott when the US withdrew its athletes in protest against the Soviet invasion of Afghanistan.

After the Summer Olympics in Los Angeles in 1984, the Soviet Union and its allies boycotted the games.

‘The Olympics should be free of politics,’ a Kremlin spokesman said of this year’s boycott.

As for the Olympics, Los Angeles will host the event in 2028.

With the threat of Omicron looming, these are the people who require a COVID booster dose