Seven more fatalities were recorded in Delhi on Saturday due to COVID-19 as the city clocked 20,181 infections in a single day, while the positivity rate rose to 19.60 per cent, with Health Minister Satyendar Jain saying the fatalities have been reported among those with comorbidities and the elderly.

The national capital has been seeing an uptick of daily cases in the last few days, mainly triggered by the Omicron variant of the infection. According to data shared by the health department, 1,586 people are admitted in hospitals, accounting for 11.24 per cent of 14,106 dedicated Covid beds.

Earlier in the day, Jain, however, asserted that the hospitalisation rate is lower than what it was during the second wave of the pandemic when the case numbers were similar. While asserting that the government is well prepared to handle a high number of cases, he announced that it has been decided to increase 5,650 normal beds, 2,075 ICUs in 14 hospitals along with 2,800 beds in eight Covid care centres.

The health bulletin shared by the government said out of over 1,500 admitted patients in hospitals, 106 are suspected coronavirus patients and 279 patients are in Intensive Care Unit (ICU).

Nearly 375 patients are on oxygen support, including 27 on ventilator. As many as 1,308 patients are from Delhi, it said.

“Around 13,000 beds are available in Delhi hospitals. Very few patients are getting admitted to hospitals and among those there are patients who come for treatment of other illnesses and are detected with the novel coronavirus infection,” he said earlier.

On Saturday, the single-day case count crossed the 20,000-mark after May 2.

Delhi had on Friday recorded 17,335 Covid cases, the highest single-day rise since May 8, and nine deaths while the positivity rate mounted to 17.73 per cent.

Jain said the fatalities are occurring among those with comorbid conditions. 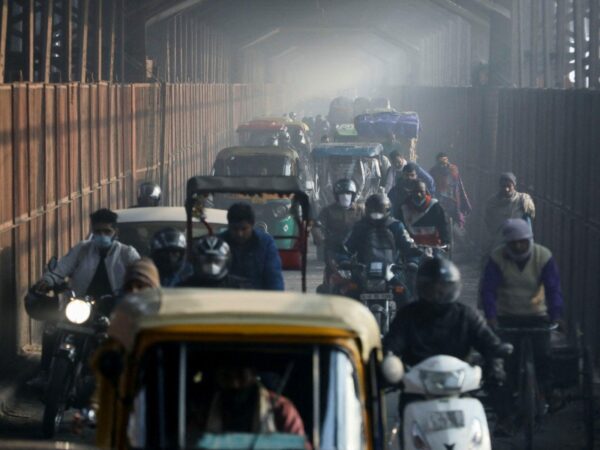 The minister also said that the city has not recorded any Omicron death, but stated that all the samples are not being genome sequenced now.

A health department official also affirmed that the analysis so far has revealed that the fatalities are among those who are elderly and immunocompromised.

A total of 1,02,965 tests were conducted the previous day, including 79,946 RT-PCR ones, while the rest were rapid antigen ones.

The health minister also said the number of cases being reported in Delhi are on the higher side due to the large number of tests being conducted on a daily basis.

On being asked whether more restrictions are likely to be announced after the DDMA meeting on Monday, he said, “Delhi has imposed several restrictions. It has closed institutions and implemented odd-even. The restrictions will only be known after the meeting.”

He opined that people should follow social-distancing distancing norms, wear masks when stepping out and leave their homes only when needed and these measures are better than a lockdown.

A senior government official also echoed similar views as he said hospital admissions have increased over the past week.

“I had been tracking the daily admissions and discharges in Delhi hospitals during the second wave. I decided to trace for this wave as well. Here are the results. There is a sharp jump in admissions over the last week.

“However, the break-up of the hospitalised patients between mild, moderate and severe gives a better picture. Fortunately, most patients seems to be doing well without oxygen support,” tweeted Ankur Garg, Commissioner (Trade and Taxation), Delhi.

Garg also said that till now the share of moderate plus severe’ patients seems, stable but said these are early days and the data is limited.

“One worry is if the share of moderate plus severe among total patients will increase as the virus seeks more vulnerable populations like the kids and the elderly (who had been staying home and thus better protected). As of now, with limited data, that share seems stable.

“These are early days and data is yet limited. It is best to err on the side of caution, if to err at all. Please keep wearing masks, practice social distancing and absolutely stop all unnecessary movement,” he said in a series of tweets.

In a related development, Delhi Commission For Women chief Swati Maliwal announced on Twitter that she had tested positive for the infection.

Over two lakh adolescents in the age group of 15-18 have been administered the first dose of vaccine against COVID-19 in the national capital, with the northeast district vaccinating the highest number of beneficiaries. According to official data, there are 10.14 lakh beneficiaries in the 15-18 age group in Delhi.

COVID: Over nine crore New people vaccinated in TN for 2022

Don't indulge in hate speeches: EC to political parties for 2022