Bhagwant Mann and Punjab: Why they stood together

I am mulling over a tragic episode in Punjab that leads to a new beginning, excited for a fresh start but clouded by hope. Lahoo Di Lau (The Blood Incandescent), a classic work by the legendary Punjabi novelist Jaswant Singh Kanwal, concludes with this insight into the Punjabi radical tradition in the context of the tragic end of the Naxalite movement: “Punjab is indomitably spirited, my dear.”.

Wind is its thunder. As blood soaks into the soil, it ferments into gunpowder. Often, all it takes is the charge to light the fuse.” Published abroad during the Emergency and smuggled into India, this novel has caused quite a ruckus. The Punjabi spirit has been constant despite a series of movements, political parties, and episodic struggles since the mid-1970s.

An ethic of struggle, solidarity, and will is a part of the Punjabi self, shaped by the lyricism of Baba Farid, Kabir, and Guru Nanak.

According to the results in Uttar Pradesh, Uttarakhand, Goa, and Manipur, the Hindutva vision has successfully expanded and deepened while in Punjab, trends show the AAP received votes from all castes and communities; rural and urban dwellers; men and women; and the poor-middle class-upper class spectrum.

Amidst the heady storm of widespread goodwill and strong support, it is easy to lose one’s head—the desire to throw out the conventional parties matured during the late 1980s to early 1990s. Since the 80s, Punjabi society has been tirelessly fighting for a way out of the pincer formation, with 11 out of 13 parliamentary seats won by people connected to victims of State oppression in the 1989 general election.

It snowballed into a boycott of Parliament proceedings when the decision was made to bring a ceremonial sword into the Parliament. In 1991, the Election Commission postponed the assembly elections because it was worried about militant victory and allowed ali­enation to strike deep roots in Punjabi society. At the rescheduled elections of 1992, militants against the widespread sentiment at the time called for a boycott of the elections. 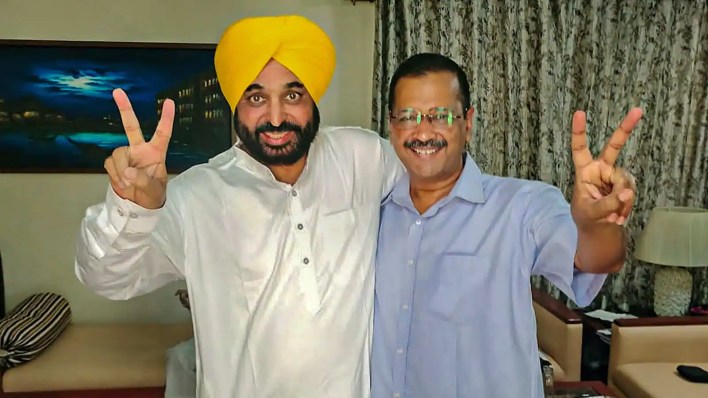 The uprising against Congress was thwarted not by the establishment (it had all but given up) but rather by the movement against the party responsible for Operation Blue Star and the Delhi pogrom of 1984, also known as the Chaurasee movement. In this election, just 20 per cent of voters voted for Congress to form the government, with Beant Singh forming the government.

During the time of this government, a militant movement became increasingly alienated as well as the administrative apparatus crumbled. During Surjit Singh Barnala’s short-lived ministry, from 1985 to 1987, corruption became a systemic component of governance. During the 1997 Akali Dal government of Parkash Singh Badal, the civil and police administrations were thoroughly politicized.

During the preceding Congress rule, he also failed to keep his campaign promise to ensure justice for victims of human rights violations. A chief minister went back on his fundamental poll promise for the first time. People, however, had supported SAD’s decision to form an alliance with the BJP so as to rehabilitate the Sikhs within the mainstream and unite the Sikhs with Hindus in Punjab.

The Manmohanomics program unleashed on a national scale resulted in the excellent sale of government assets to cronies at throwaway prices, causing further destruction of this nation’s institutions, be they schools, hospitals or water supply. 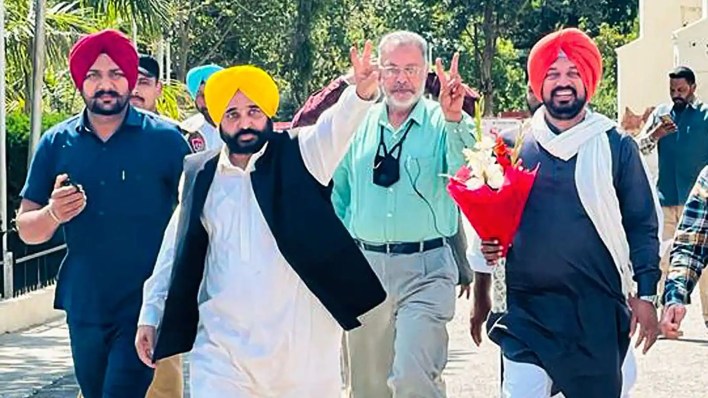 In that period, Bhagwant Mann was also writing political satire video features that explained the public’s disgust at this vulgarized notion of ‘development’. SAD was, undoubtedly, evolving from a solid political platform with a formidable rural base into a business entity with a top-down corporate structure. Amarinder Singh became state chief in 2002 after rampant corruption overturned Congress’ antagonism.

In terminating the river water-sharing agreements, his government partly kept its promise. This is strange. On the one hand, an Akali CM managed to prevent the Congress from operating in the federalist space in Punjab politics, while on the other hand, safeguarding the economic interest of Punjab.

While the crude political discourse entertained the people, it did not provide an understanding of the structural malaise devouring society, economy, and state revenues in Punjab. All over Punjab, mafias rose up to feed both parties. There was an influx of sand mafias, land mafias, cable mafias, liquor mafias, and transport mafias. The death of so many young people across the state brought into sharp focus the slow withering away of the State, coupled with the erosion of any notion of good government.

It was this discontent that led to AAP’s parliamentary breakthrough in 2014. Anguished by the rural loss of livelihood, people committed suicide in the countryside. It is in this environment of hopelessness that a number of socio-political formations emerge with uncertain outcomes, including farms unions, Dalit organizations, and citizen forums. While the AAP and the People’s Party of Punjab posed a challenge to the Akali-Congress power politics in the 2012 and 2017 assembly elections, there was no sign of a popular revolt manifesting itself in the election corridors.

See also  By 2022, is ' New India' becoming a reality? How far has the government come in achieving its ambitious goals?

Punjab, an outsider that speaks Hindi, has welcomed a distant agitation against corruption in India overwhelmingly. A vehement disgust at every ‘insider’ Sikh Punjabi leader of the same political culture was also reflected in the acceptance of Arvind Kejriwal as a leader who could liberate Punjab from the vicious political culture.

Several new-generation political ‘rebels’ and their platforms were repulsed by the pusillanimous behaviour of Punjabis as they shut down at the first setback, blamed them for not supporting them and returned post-haste to their parent parties. Punjabis never completely abandoned Kejriwal, even when they distanced themselves from his national stances, and Kejriwal appeared on the horizon as the new tiger who refused to relent in spite of significant obstacles.

Interestingly, even with the rise of AAP in 2014, structural conversations remained largely obscuréed by corruption and drug problems, which dominated the popular discourse. Service delivery, efficient government, and preventing petty crime were central to the AAP’s achievements in Delhi.

It was ik mauka that replaced badlaav, the popular refrain of the electorate. As opposed to the vyavastha parivartan or Swaraj, the badlaav signifies a new situation ushering in satta parivartan. Punjab’s AAPisation and a provincialised AAP are linked by this process. Panth, federalism, establishing minority rights, protecting the river waters, etc., once occupied the grand narratives of Punjab politics. Now a politics of alleviating the everyday sense of indignities heaped upon the people by a criminal class of political leaders has taken hold, a veritable uprising of the commoners against the entitled privileged.

Bhagwant Mann is the symbol of ‘political satire’ while Navjot Singh Sidhu symbolizes a ‘depoliticised humor’ that appeals to the urban audience.

Yet, Bhagwant Mann’s involvement in the 2022 verdict should not be overlooked. Beyond Bhagwant Mann as an individual, there are multiple elements informing his phenomenon. Punjabi intellectuals have almost been wholly eclipsed on March 10, a significant event.

It is a vernacular language spoken by a substantial number of public figures, organic scholars, and theatre artists, including other legendary figures like Jaswant Singh Kanwal, Kaveeshar Karnail Singh ‘Paras’, and poet Sant Ram Udasi. Despite their sway over the people, these admired figures were revered by the political class. As they passed, academia, commentators, and journalists joined in a cosy pact with the establishment for petty nominations, ranks, and projects.

As a result of the defanging of Punjab’s intelligentsia, the political class emboldened itself and ceded territory to famous Punjabi singers, film actors, kabaddi players, and media celebrities as the only legitimate claimants to Punjab’s mindscape. Young people have become depoliticised and are looking for adventure in roadshows, rallies, and trolling on social media.

The farmers’ movement’s veteran leaders and those icons have been involved in a long-running feud regarding decision-making. In the case of Bhagwant Mann, through his political satire, one can clearly see the emergence of an organic intellectual model, preserving the legacy of popular radicalism. Stardom in the entertainment industry contributed to his reaching out to Punjabi masses differently than earlier generations of intellectuals. 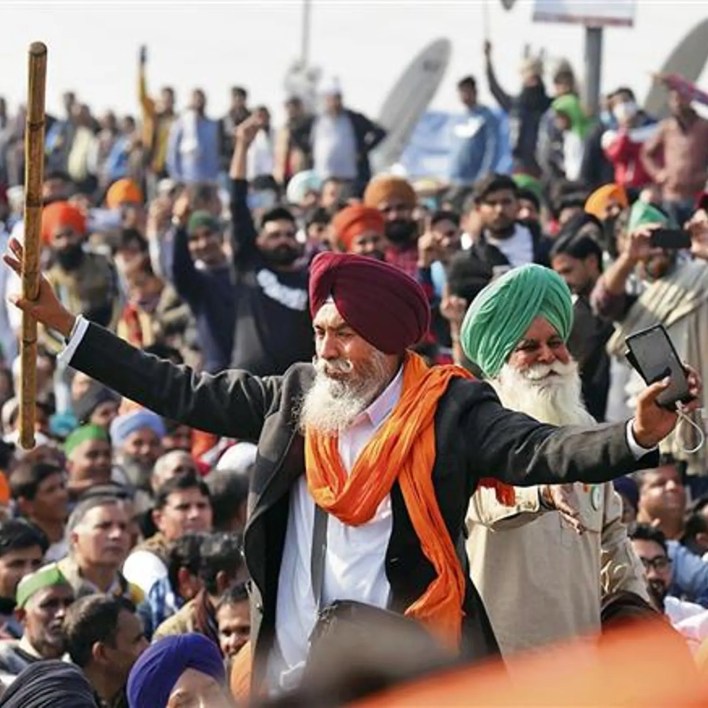 Navjot Singh Sidhu represents a ‘depoliticized humour’ more appealing to the urban audience than Bhagwant Mann. In other states, he was a star campaigner for the Congress (part of the reason he became a star in other states), but in Punjab, Mann’s spontaneity and fluency are unsurpassed.

It may come across as a source of deep despair when these two performers are hailed as the epitome of organic Punjabi intellectualism, but it signifies the near-total absence of credible intelligentsia. Also, it should be noted that the militant rhetoric of Jarnail Singh Bhindranwale was a study in rustic popular theology from the point of view of two conventional parties. Early in the 1980s, he played a pivotal role in seizing the space of righteous indignation from the left.

In this sense, the AAP’s victory reflects the collective will of Punjabi citizens as a continuation of non-violent movements to demand justice over the sacrilege of the Guru Granth Sahib and the farmers’ movement. Having tasted success after decimating the Akalis and ending the Akali-Congress monopoly, silencing the intelligentsia and repealing the agrarian laws, now the real opposition is suffused with the sense of their collective might after successfully repealing the agricultural laws.

During their transformation from a default choice electoral machine into a political formation, the AAP must put in motion a governance model based on service delivery. Punjab is at the helm, for now, thanks to its assertive population. The significance of the mandate can best be grasped if we examine Mann’s satirical features of the mid-1990s. 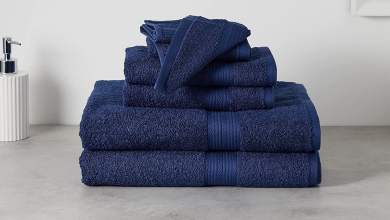