Telecom Spectrum Auctions took place on the 1st and 2nd of March 2021, five years after the last bid. The Department of Telecommunications had put out a notification for the auction on the 6th of January, calling bidders to participate. The auction was only for the 4G spectrum. One reason for the auction to be held this year is that the validity of many areas of the spectrum was about to end (for many telecom companies). The second and most important reason is that it is another way for the government to earn revenue. The Government sought to earn an estimated 3.92 Lakh Crores from this auction, a rather tall ask according to industry experts. The number of players in the telecommunications market decreased from 8/9 players four years ago, to 3 major companies in 2021. The fact that only three companies came in for the bidding is proof of how concentrated the sector has become. Before delving into the auction it is essential to understand what spectrum is.

What is spectrum?
All the wireless devices that we use carry the information we transmit, through airwaves. The information or data that we send is transmitted in the form of signals.
Airwaves are divided according to their frequencies. This is known as the electromagnetic spectrum.
The electromagnetic spectrum is simply the scientific name for the entire range of light, most of which is invisible to us. In fact, visible light lies between 400- 790 terahertz, which is not even one-tenth of the entire range. In increasing order of frequency, the spectrum can be divided into seven types of waves:
Radio waves, Microwaves, Infrared, visible light, Ultraviolet waves, X- rays, and Gamma rays. While X-rays and microwaves have higher frequencies, the telecommunication sector is dependant on radio waves which have a lower frequency. Radio waves have a frequency of 3 Megahertz to 300 Giga Hertz. Among these, the telecommunications sector uses radio waves lying between the frequency of 700MHz to 3GHz.
Signals are carried on radio waves which must be sent at designated frequencies to avoid any interference. Higher frequency ensures better data sharing while lower frequencies can transmit signals to longer distances. 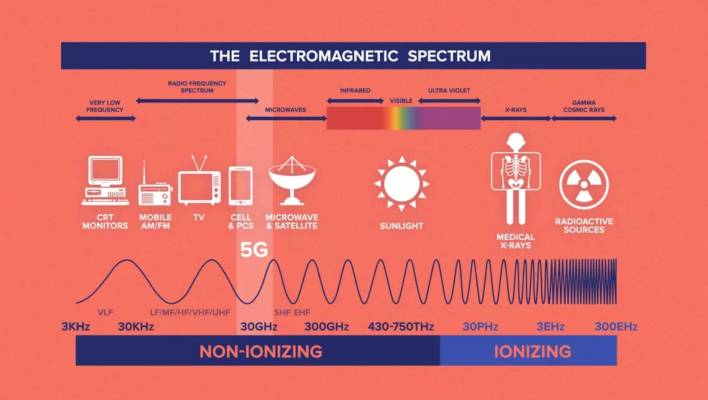 Airwaves are sold for a certain period of time to telecoms. When the designated period of time ends, their validity lapses. The validity is generally 20 years. For the recently held 4G auctions, frequencies from 700MHz to 2500MHz were available for bidding. Since the spectrum is public property, it is possessed by the Government of India.
For carrying out the auction, telecommunication companies are required to put down their ‘Earnest Money Deposit’ (EMD). Earnest Money Deposit is a usual practice to show interest in buying an asset that is high in value. In telecom auctions, the amount of EMD indicates an operator’s bidding Strategy. Operators are awarded Eligibility Points based on their EMD. According to the amount of EMD a bidder has put in, they can target a certain quantum of airwaves. Over the past years, it has been observed that bidders spend 5-7 times more than the Earnest Money Deposit put down by them. For this auction, the EMD that was put down by the three major
companies were-

According to the EMD, Reliance-Jio is the most aggressive bidder. There are many reasons for it. The spectrum validity of a certain bandwidth for Jio is said to expire in July 2021. Moreover, the customers and the demand for Jio, since its inception has been on the rise. Hence, it is in dire need of an airwave. Furthermore, since Jio is
younger than the other two companies it can spend a lot more due to lesser debts.

Bharti-Airtel came out to be the second-largest bidder. Over the past two years, even after tiff competition from Jio, the number of customers of Airtel has been increasing. However, due to high debts, Airtel refrained from putting in a higher EMD.

Vodafone-Idea has been losing its consumer base due to a copious amount of competition from Jio. It is wondrous how Vi has been able to withstand the undue competition. However, even after merging Vodafone and idea, the telecom service provider still has high debts and is barely surviving. This is evident in its Earnest
Money Deposit.

Expectations of the Government

The last spectrum auction was held in 2016. These auctions turned out to be a huge loss for the government. The estimate was to sell 2354.55MHz of spectrum for a price of 5.60 Lakh Crores. However, the Department of Telecommunications managed to sell only 965MHz-which is about 40% of the estimate-at a price of 65,789 Crores.

This time around the government expected to sell airwaves of frequencies- 700MHz, 800MHz, 900MHz, 1800MHz, 2100MHz, 2300MHz and, 2500MHz. The revenue that the government expected to earn after selling airwaves in all these frequencies was Rupees 3.92 Lakh Crores. Industry experts labeled this expectation to be a little overboard, given that there are only three bidders. Among these bidders, one is undisputably the market leader.

The Real bids
The Auction was complete within two days. It lasted for six rounds. 4 rounds happened on the first day and the rest on the second day. The government received bids worth Rupees 77,814 Crores, 90% of which was made on the first day itself.
As expected, Reliance Jio emerged as the biggest bidder. The operator acquired a total of 488.35MHz of spectrum for Rupees 57,122.65 Crores.
Bharti Airtel bought 355.45MHz of the spectrum at Rupees 18,698.75 Crores.
Vodafone Idea being the smallest bidder could acquire only 11.80MHz for Rupees 1993.40 Crores.

Telecom Secretary, Anshul Prakash said that out of 2308.80MHz of spectrum put for auction, the government has received bids for 855.60MHz.
This means out of the total only 20% were sold out.
Industry experts had expected the bids to be around 60,000 crores. However, the bids surpassed the expectations, earning more revenue for the Government.
2300MHz turned out to be the most sought after, whereas none of the bands under 700MHz was bought by the operators. One reason for not biding 700MHz was its high reserve price, Airtel representatives were quoted as saying.

For Spectrum bought in the 700, 800, 900MHz band, telcos need to pay 25% of the cost upfront. Whereas, in the case of the rest of the frequencies, 50% of the cost needs to be paid upfront.
The remaining amount is paid in 16 annual installments.
The government will receive an estimated 19000- 20000 Crores at the moment. In addition, there are Spectrum usage charges that the operators need to pay. 3% of the revenue collected from spectrum usage is to be paid to the government. At a time when the fiscal deficit is 9.5%, which is quite high for a country like India, revenue collection from every sector remains the priority.

What is in it for the Consumers?

With these auctions, the amount of spectrum bought by the telecom companies will determine the efficiency with which they handle the traffic.
For consumers, it means that:
-Connectivity Improves
-Network Capacity improves
-Data usage increases

What about 5G?
As mentioned earlier, the auction conducted on the 1st and 2nd of March was only for 4G. A question then arises, when will India have 5G?
The Department of Telecommunications has hinted that an auction for 5G might occur at the end of this year. The Department is trying to put in the unsold band of 700MHz for sale for 5G, stating that 700MHz is a very efficient bandwidth. However, telcos are looking forward to bidding for frequencies higher than 2.5GHz.
Even if 5G services open up, it will only start with the metropolitan cities.

What is the Decoy Effect and why is the smartest buying decision you made is not actually the smartest?