I’m sure you’ve heard by now the latest data revealed by the Ministry of Statistics and Programme Implementation of the GDP or gross domestic product data for the first quarter of the financial year ’22, This report plays a very important role in assessing the state of the Indian economy because these numbers are official records and would bring uniformity in the economists’ evaluations coming up ahead of these haywire predictions standing in front of us right now.

However, while the public may suffice its optimism by looking at the large statistical figure, there’s a lot that goes in the background for us to conclude by just looking at the number. Here’s all you need to know and understand, to assess the current state of India’s economy.

We recently undertook a discussion on the report released by the Ministry of Statistics and Programme Implementation and all you need to look out for in it. One of the most important things we discussed was how important it is to look at the state of consumer demand and to analyse the gross value added and gross domestic product numbers beyond the statistical numbers. 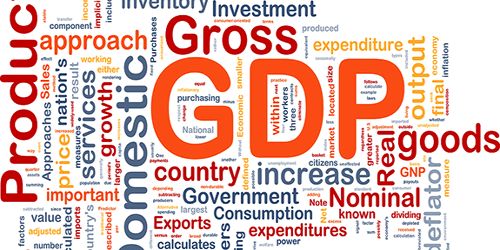 It is because every three months, the Ministry of Statistics reveals official numbers on two critical variables of a country’s performance- tracking the total demand and the total supply in the economy. The former is measured by the gross domestic product, calculating the total demand in the economy during the said quarter through the addition of the final value of goods and services. Measuring the latter is the gross value added in different sectors of the economy and tracks the total output through total supply. With the addition of the government’s net revenue to the gross value added, the two indices provide the equalized value of the output.

The purpose of defining these indices is to reflect on the parameters that this report can give us- the condition of production of the economy, how government policies look like over the quarter, a desperate revival of the consumer demand and performance analysis of various sectors to identify the weaker links for the government to provide additional aid to. All these parameters so described in the Ministry of Statistics and Programme Implementation report would answer all the above conundrums and pave the way for the approach to be followed as we move ahead.

As such, from the official sources of the Ministry of Statistics and Programme Implementation, you can retrieve two tables, as follow- 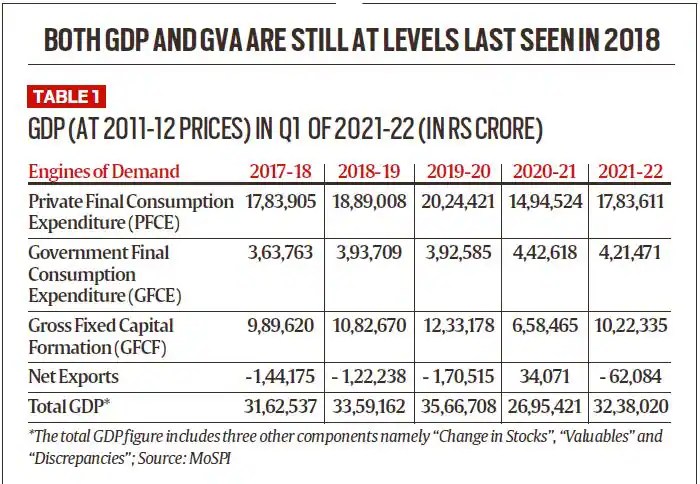 As can be seen from the data above, the 20.1 per cent increase in the quarter 1 performance given year-on-year does not seem like much of an improvement given the absolute numbers in real terms, as compared to those of pre-pandemic years. This is what statisticians refer to as the “low-base effect”, which creates an optic illusion of large change when the absolute nuances have been relatively much less.

As explained by Aditi Nayar, Chief Economist, ICRA (a rating agency), states, “the sharp YoY expansion in Q1 FY2022 is analytically misleading with a sequential slowdown of 16.9% over Q4 FY2021 and a shortfall of 9.2% relative to the pre-Covid level of Q1 FY2020”

Another important thing to note from this table is the performance of different components of the gross domestic product, as we discussed in the section back then. As discussed, discretionary consumption is still a long way to returning to normalcy, as shown by the data released. It is because the approaching uncertainty, and thus estimated expenditure, of the third wave along with the exhaustion of savings during the pandemic, has led to a precautionary motive to save. Given the huge share of contribution of the consumption sector on India’s total output, a fast-paced recovery of the engine is the only way we can see our consumption-led economy improve.

The ties between consumption and investment demand are also clear as day from the data given above. A detailed discussion recently surfaced as to how lack of improvement in the consumption demand would mean crawling investment (Gross Fixed Capital) demand too, forcing us to again circle back to the same discussion of demand revival. India Inc. has been on a deleveraging spree, led by some big names in the industry, and this is another worrying phenomenon for the struggling Indian economy because the capital investment would deter the long-term growth potential of the country.

See also  India's GDP growth is expected to be 8.5 percent in FY22, according to ICRA. 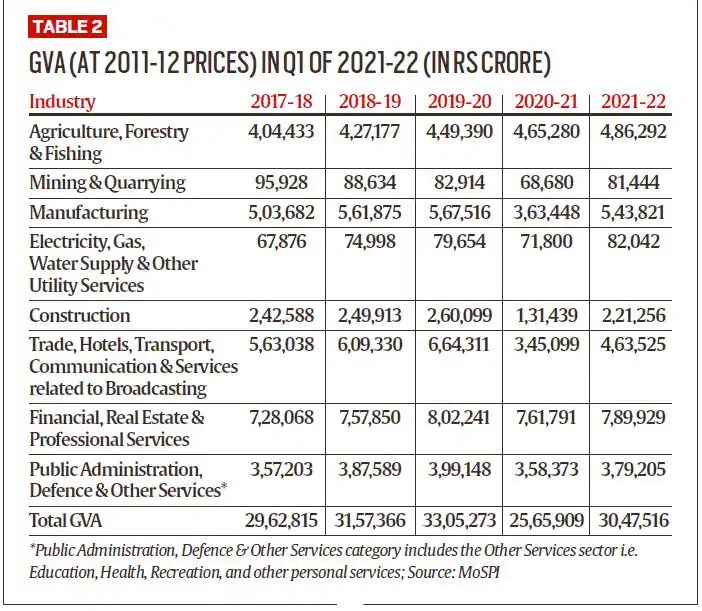 As for sectoral performance, even though every sector has registered an increase in production relative to the last quarter, the absolute differences are much more from the pre-pandemic situation for us to claim that we have returned to recovery. This recovery is significantly relative, and it is imperative to look at these absolute numbers to steer clear of the optical illusion these percentages and headlines are throwing our way.

As mentioned, back in the fiscal year’21, agriculture was the only sector that had submitted an overall increase in the value-added, due to a number of factors like continued mobility to sustain supply and adequate government aid to sustain demand. Bearing the title of the economic saviour of the country back in the day, the agriculture sector has continued to grow. This time, however, with other sectors. After losing a very significant chunk of output in the pandemic year, Construction and Trade, hotels, transport, communication and services sector have started to get back on their feet, even though much slower than what is needed to return to the pre-pandemic state.

We are so desperately mentioning the return to normalcy, or the pre-pandemic state because for India to achieve even nominal recovery, it needs to get over the pit that the pandemic took it to. As a comparative index with other countries, most world economies have returned back to their pre-pandemic levels not only in terms of supply but demand revival as well. There are two significant reasons behind it-

The fiscal expenditure undertaken during the pandemic in terms of unemployment benefits and direct transfers helped restrict consumption demand to fall down below a certain level, a feat much needed in the consumption-led Indian economy. As a result, the stimulus-led consumer demand is spurring not just the domestic demand of such countries but also global demand, hence the large net export numbers you can see from the data above.

Along with that, a fast-paced and sustained vaccination drive has helped bridge the uneven demand and supply gap and has helped in mitigating the uncertainty around the near future, hence driving growth.

Do the numbers mean a V-shaped recovery?

While the 20.1 per cent growth may give the illusion of a V-shaped recovery, the absolute numbers when seen in the context of past figures seem to differ. The recovery being witnessed can be at best termed as K-shaped, for it reflects nothing but uneven growth led by income inequality increases.

Construction and trades sectors, that employ a major chunk of the country’s unskilled labor force, are even below their 2017-18 levels, which is worrisome in a number of aspects. Not only that, recent reports suggest that the sectoral growth is not proportionately translating in employment generation, meaning that workers are not as better off with the sectoral recovery. There are a lot of problems surrounding the Indian economy at the point, and these quarterly reports are a reminder of the areas that desperately need to be worked on.

Most Promising Books and Reference Android Apps in India 2021