Foxconn: We live in a world full of electronics, and change is the new normal. Everything has become more inclined towards electronics now, which is the only way to sustain today’s fast-paced life. We have witnessed so much progress in the electronic sector in the last decade. Everything which once felt unreal or imaginary is now getting real and achievable. A few decades ago, there was no concept of mobile phones, and only a few people had telephone connections at their homes. However, now almost every single person owns a mobile phone.

The pollution caused by emissions from vehicles has caused a mess, and the rising level of pollution across the globe is alarming. Therefore, the countries are also promoting electronic cars and have favored the production and development of more and more electronic vehicles. They are the only way to reduce the ever-rising pollution globally and move one step forward towards a greener world. The popularity gained by electronic vehicles in recent years and the widespread acceptance that the popularity brought along with it has influenced many big games to invest in the growing market of electronic cars and get firm control over this sector. Many big car manufacturers such as Tesla, Mercedes, Maruti Suzuki, and6 many more have already launched or are manufacturing models of new electronic vehicles.

However, while unveiling the electronic vehicle prototypes, Foxconn cleared out that the Sedans and SUV vehicles, which the company reveals, will be built for the company’s customers in the automotive segment. Therefore it won’t be selling those electronic vehicles under its brand. The company said that it would produce electric cars for auto brands under a similar contract. The growing concern towards an electron vehicle market is an excellent step towards generating a pollution-free environment. Talking more about the progress, the company last month agreed on buying a vehicle manufacturing plant located in Ohio. The company bought it from an ailing startup Lordstown Motors for as massive as $230 million. This helped give the company a booster shot in automobile assembly capacity, equipment, and talent. General Motors previously ran this plant before Foxconn purchased it. However, this is not the only investment that the company wishes to make to strengthen its pace of producing electronic vehicles for various companies across the whole globe.

According to Reuters, this investment in Ohio will be followed by plans to build another manufacturing facility in Thailand and install a vast chip-making plant in Taiwan. The main goal behind this significant investment is to service its customers related to automobiles and its partners. This already includes the US-based Fisker as well as Geely of China, closer to their end-users. The company unveiled the three prototype electronic vehicles during a press conference in Taipei, Taiwan, on the 18th of October. Ever since then, the word has not stopped spreading.

Why did Foxconn announce these prototypes at this time particularly?

We all know how famous Apple is, but what we don’t know is that they too are the customers of Foxconn. iPhone maker Apple has currently been working secretly on an independent automotive project which projects Titan codenames. This is about developing electron vehicles, or specifically electronic cars. Even though Apple is yet to formally announce its manufacturing partner, the CEO of the company Tim Cook has been giving various hints recently that the company has been working on autonomy as a core technology.

Moreover, the Chinese company Xiaomi, very popular across the globe for mobile phones, televisions, and other electronic items, has also shown a keen interest in electronic vehicles. The CEO of Xiaomi, Lei Jun, announced that the company will mass-produce its cars in the first half of 2024, which is less than three years from now. The vehicles so developed will be completely electronic-based. 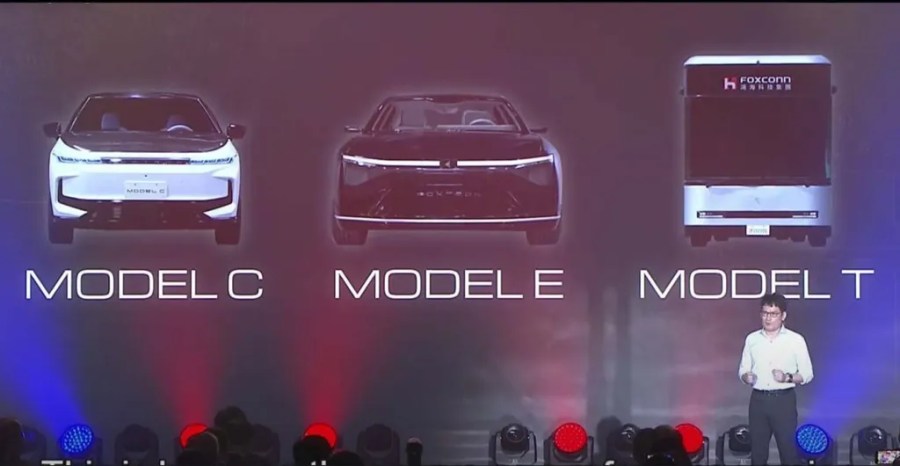 Xiaomi’s plan over this sector of electronic automobile production is solid. In March, the company said that it would be investing as large as $10 billion in a new electric car division in the upcoming ten years. This investment is enormous and will provide a significant boost to the company’s newly developed electronic sector.

Similarly, like Apple, even though the company has told in reports that they intend to get into the sector of Electronic vehicles formally, it has still not announced whether the company will be going solo and will be developing the car independently or through a partnership with a manufacturer of electronic vehicle/products.

Therefore, this was the perfectly right time for Foxconn to unveil its electronic prototypes in the market to showcase its abilities and attract foreign investors. The need for electronic vehicles is spreading at a breakneck pace and, thus, new opportunities every single day.

Talking from the view of the environment too, this is an excellent step towards creating an environment free from pollution caused by car smokes and leading a cleaner and healthier life. However, this is a long road and will take a lot of time to develop. This new sector of growing electronic vehicles is creating new opportunities every day and is boosting economies across the globe, creating new investments and new jobs.