India is a religious country, or let’s just say it is blinded by it. While spirituality, religion and holy names are said to be the guiding paths on one’s life, in India, they are infamous for quite the contrary- violence, conflicts and well, foolishness. In 2020, during the first wave of the virus, a religious congregation took place in the middle of the pandemic in the national capital’s Nizamuddin Markaz Mosque, which eventually became the super-spreader of the virus in the country with more than 4000 fresh confirmed cases, leading to consequences that are even painful to recall. A month after the Tablighi Jamaat incident took place, a third of the country’s confirmed cases were linked to the event, calling in penetrated anger from all sections of the society, not only for the people that attended the congregation but for the entire Muslim community, giving rise to yet another wave of hostility between the countrymen following different ideologies. However, no matter how out of hand the situation got both in terms of cases and national peace, it was hoped that the people would now be wary of any such event in the future for they have seen the consequences first hand. Well, let’s just say the expectation was way too high from the people blinded by their faiths and politicians that care way too much about their reputation when opposed to the people’s health.
The recent Kumbh Mela incident that took place in the country is pretty convincing evidence of the aforementioned statement, with more than 70 Lakh people participating in the event amidst the devastating second wave of the virus and an exponential case surge. While the event is generally 3 month long, it duration this time was cut short to one month due to concerns over COVID-19 case surge. Wait, how does this make sense? An event that is precedent to register an average of about 10 million devotees each year to be held during a time when the second wave has hit the country and we have seen consequences of one such religious event last year already. It’s actually disappointing more than it is astounding because, in a country where blind faith guides people, one such event at the expense of people’s lives does not seem much of a big deal. And the authorities? Well, while the Prime Minister was busy handling elections of a state in the middle of the case surge, other authorities decided to stay put on the conduct of the religious summit. Oh, and it is not like they did not see the results coming, they simply chose to ignore them. 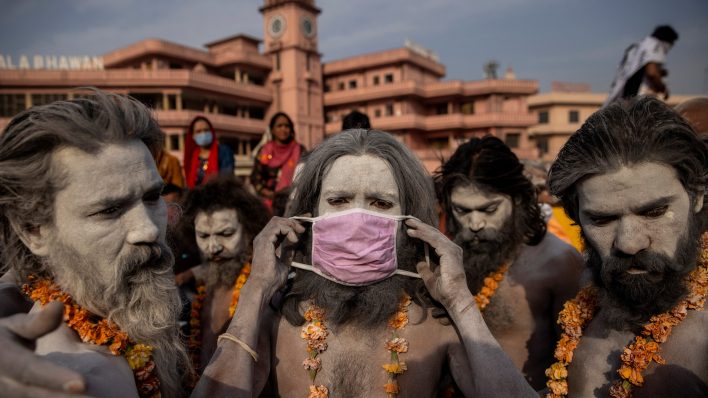 Back in January 2021 when the Uttarakhand government started planning for the event, at a time when even the prospect of crowds was anathema everywhere, it brought in warnings from the public, centre and experts, all of which were duly paid no heed by the authorities. Why do we say that? Note that this discussion was of the time when 10-20 pilgrims and 10-20 locals in the area were being reported positive every say, as mentioned by the Health Ministry at the time. The government had also been told that the daily testing records that were coming from Haridwar were not adequate enough, keeping in view the expected number of pilgrims. But as expected, the government of Uttarakhand was busy commenting on women wearing ripped jeans than handling the situation at their doorstep. A petition was also filed by the Supreme Court to direct the Centre, Uttarakhand Government and the National Disaster Management Authority to immediately clear the mass gatherings from Haridwar city as soon as possible and prescribe a safety protocol with respect to the people returning to their homes. And we all know how that went in a country where actions come at a time when the damage is not only done but also worsened exponentially.
Well, as one could see coming both from the Uttarakhand government’s approach to the event and the devotees blind following of traditions, about 99 per cent of the devotees that attended the event were tested positive for the virus in Madhya Pradesh, with some of them being untraced. To analyse the extent of this number, take note of the fact that millions of people attended the religious congregation, coming from a large number of states and a large number of returnees are still untraced.  The cases are spiralling at an alarming rate in Madhya Pradesh as the state saw 12,379 new COVID-19 cases, 102 deaths in the 24 hours of the return of devotees, with Delhi, Gujarat and many other states seeing much-worsened caseload after the event.  There’s no doubt that the event not only added further burden on the already overburdened healthcare infrastructure of the country, it also led to a loss of a vast number of lives amid this deadly second wave.
Even though the event gained a lot of criticism from the people, the world and other governments, the damage is done and it is definitely not like this was unexpected. We’ve been witnesses to a similar mistake before and a mistake once repeated becomes stupidity, as can be vividly seen from the aftermath of the event. We can go around blaming the Uttarakhand government, the centre and the people as well, but the damage is done and no matter how much we wish in the holy water of Ganga now, there’s no going back.

Air India Pilots Demands To Get Vaccinated: Pilots warning To "Stop" Working If Vaccination Camps Not Set For Pilots Above The Age Of 18