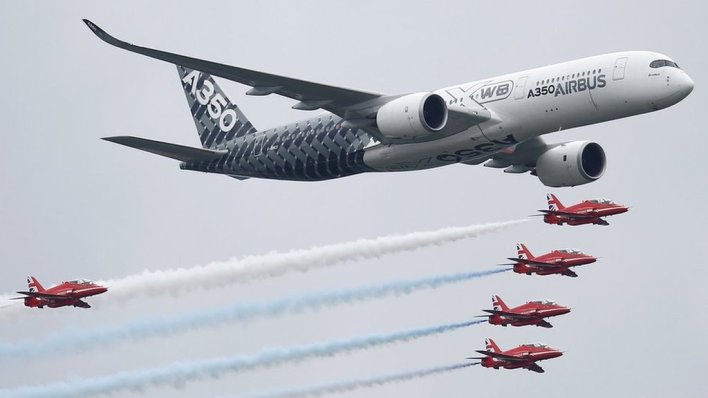 The chief executive of planemaker Airbus has accused the government of having no idea how to take the UK out of the EU without damaging the country.

Tom Enders said it “still has no clue, or at least no consensus, on how to execute Brexit without severe harm”.
He was speaking as ministers prepare to meet at the prime minister’s country residence to agree a blueprint for the UK’s future relationship with the EU.
Airbus is taking steps to mitigate the impact of Brexit, Mr Enders said.
“Brexit in any form, soft or hard, light or clean – whatever you call it – will be damaging,” he added.
A government spokesperson said it was confident of reaching a good Brexit deal, adding: “We do not expect a no-deal scenario to arise.”
Mr Enders’ comments follow a warning given last month that Airbus could leave the UK if the country leaves the single market and customs union without a transition deal.
At the time, the company said: “This scenario would force Airbus to reconsider its investments in the UK, and its long-term footprint in the country.”
Airbus makes wings for the A320, A330/A340, A350 and A380 passenger planes in the UK and has 14,000 staff.

Tom Enders made his comments in a light-hearted fashion – with a reference to England and France potentially facing each other in the World Cup final thrown in.
But the message was deadly serious. The gloves have come off.
It seems Airbus has lost patience with what it perceives as government infighting, and is demanding at least a degree of clarity over what the future will bring.
In June, the European aerospace giant warned that a hard Brexit could force it to reconsider its investments in the UK. That produced a slap-down from the Health Secretary, Jeremy Hunt, who said its “threats” were “completely inappropriate”.
In response, Mr Enders pointed out today that if there was one company that made its voice heard, not only in London but in European capitals as well, it was Airbus.
No plans to stay quiet then – and so a forthright message was delivered just as ministers gathered ahead of that oh-so-important meeting at Chequers.

Airbus said the current planned transition period, due to end in December 2020, was too short for it to make changes to its supply chain.
Mr Enders said he had a duty to Airbus shareholders to speak up: “We have been very clear about what the consequences particularly of a hard Brexit would be.”
His comments are the latest warning on Brexit by big business.
On Thursday, Jaguar Land Rover – the UK’s biggest carmaker – said a “bad” Brexit deal could force it to close factories and would threaten £80bn of investment plans for the UK.
Source: BBC

This AI uses sight to isolate the sound of specific instruments