Circular economy in textile industry and the potential benefits

Today, we will be talking about an industry that is currently resulting to be very beneficial for any economy. It generates foreign direct investments as well as absorbs a large share of the labor force in any country. Yes, the textile industry. The global textile market is very vast. It sums up to nearly $1.4 trillion and its major share is in the developing countries, like China, India, Bangladesh, Brazil, Pakistan, and Turkey. The textile industry employs a large number of people, nearly over 300 million people, therefore, contributing to reducing unemployment in the country. 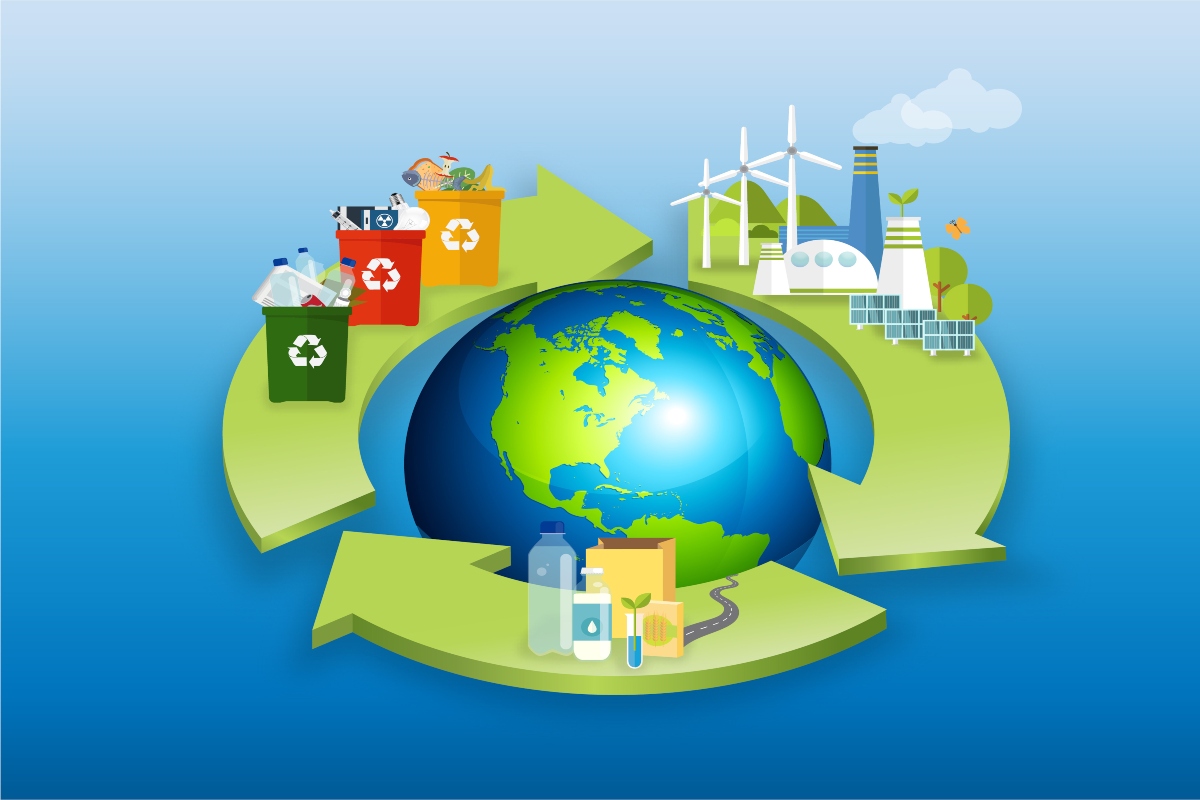 To meet the rising demand for textiles, these environmental and social values are often neglected and this continued negligence has been very dangerous for the world, harming the people and over-filling the landfills. The world has started to realize the damage it is doing to the environment through its non-eco-friendly measures. A point to keep in mind is that this not only creates environmental problems but also leads to losing many economic opportunities.

However, the textile industries are very important for the world economy. From employment generation, to start-up plans, and facilitating a strong export system, the industry has provided all of them. But all this cannot be accommodated an excuse to destroy the environment. The industry creates a huge amount of waste and also raises the level of pollution. But does this mean we have to reduce the working of industries to protect the environment? The answer is a very big no. Economic development and protection and promotion of a clean environment can be done simultaneously if our actions are backed up by proper planning and management. Here comes the approach of the circular economy.

What is the circular approach?

To make the working of textile industries more ecologically efficient and less polluting, the approach of circular economy is to be used which contributes to connecting the upstream and downstream of the global economy. The circular economy approach suggests more use of renewable and safe inputs, increasing the durability of cloth, reusing their produce, and turning waste products into a new ones.

The adoption of this approach in the industry can have an immense impact. Initially, by reusing their products and turning waste into gold, the supply chain can be improved to a great extent. Further, the increased supply by reusing and recycling also reduced the level of carbon dioxide emissions by 33% embedded in the textile industries. It could also reduce air, soil, and land pollution linked to production. All of this is evidenced by the recent UNCTAD study as part of the Small Medium Enterprises Plan.

More than the benefit it provides to the environment, great circularity could bring back recovery and upcycling activities from the bottom, leading to greater profits for the industry.

However, environment development is a key factor but the social concern is often neglected. The circular economy approach itself focuses more on the protection of the environment and less on the protection of social justice. We very well know how the workers at the bottom level are treated at almost every workplace. In the textile industries too, the condition of workers is often neglected and mere importance is given to them. A piece of recent news supporting this is the grim incident of the Rana Plaza Factory Collapse in Bangladesh. It stands as a sign of the hardship faced by the workers at lower levels. The existing system of collection of old clothes for the needy people in the industries has never helped them, even after being such a great concept. The reason behind this is many countries are involved in the second-hand trade of clothes, which reduces the chances of the actual people who are in need to get these clothes. A very meager percentage of the total clothes collected are given to the people who are in actual need and the rest is used for trade.

This not only affects the needy people, but this trade of second-hand goods has also hindered the growth of these textile industries. Many countries in the East Africa region have accepted that this trade is, in the end, harmful for the development of their nation.

Another big question that arises the effect of the circular textile economy on net job creation. Will it be beneficial or will it be harmful? The answer to this question is very complex.

Textiles primarily rely on petrochemicals and agricultural sources. Some sectors might face a slight decrease in the employment levels while the rest will not be affected by the circular textile industries. Main raw material for the textiles is cotton and polyester, which are at the risk of facing a decline in the employment levels. However, the study suggests that the net effect of this approach will be positive, for the environment as well as for the social economy. The study further suggests that nearly by this approach, nearly 18 million additional jobs will be created.

The circular textile industries will also help in creating a safe and healthy working environment for the workers. Therefore, the present condition of their workplace will be improved and will lead to improving the health of the workers.

Textiles contribute to a large share in the international market. The net trade of export was nearly $7.7 billion with almost 8.6 million tonnes of textile being traded. Having a big market has some disadvantages too. Making policies becomes very difficult in the case of textile industries due to different jurisdictions and national rules involved. Sometimes, policies aimed for the good can have a bitter impact too. Import tariff imposed on second-hand textile is higher than any other commodity, making it very expensive as well as difficult for the companies to repair garments in foreign workshops.

With years passing by, people are now realizing the importance of keeping their environment healthy and cleans, thanks to the virus. Industries are adopting eco-friendly measures to be able to develop sustainably. However, these policies often neglect the condition of the social economy, the condition of people working at lower levels in these industries. Therefore, enough attention should be given to the people, along with the environment to actually develop the world. Remember, better planning keeping in mind the environment as well as the people always benefits the industry.