On Wednesday Ethereum’s 27-year-old founder Vitalik Buterin donated $1 billion in crypto-currency to fund the aid work of Covid 19 in India, perhaps the biggest philanthropic donation to help Indians (in the situation of covid) from any country or person.
Buterin, the multimillionaire wunderkind who created the world’s second-largest crypto after Bitcoin, donated the Indian Covid Crypto Relief Fund managed by Sandeep Nailwal, an Indian crypto entrepreneur. He brought the disparate emergency medical relief worlds and meme coins together in this process. The crypto group worldwide will also closely observe how the donation happens and reaches targeted recipients in the next few weeks. 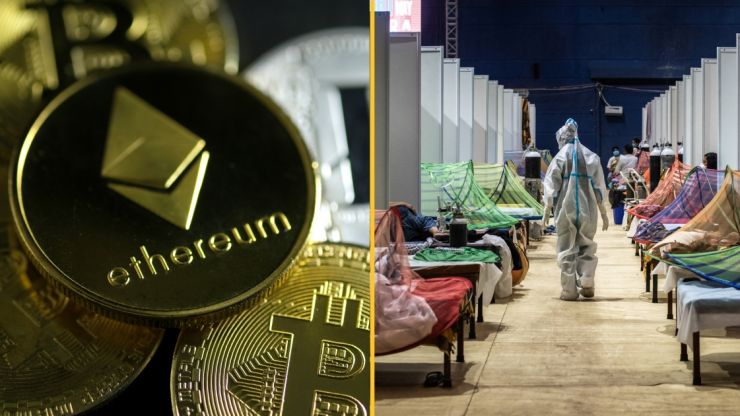 Buterin’s donation is mostly made in the form of Shiba Inu (SHIB), the cryptocurrency that is a part of an increasing range of digital meme currencies. The concept of money dependent on a joke or meme would sound bizarre if you are unfamiliar with internet culture, the millennial penchant for irony and the topsy turvy world of cryptocurrencies. All these currencies are on the same track at the convergence of these volatile powers.
Shiba Inu, named after the Japanese hunter dog breed, is a meme coin, similar to its more well-known counterpart Dogecoin, which was developed as a parody or prank on the cryptocurrency craze. In 2021 the exchange rate grew over 17,000 per cent, which proves that the Coin fans are betting strongly, albeit speculatively. The rise of Dogecoin was partially due to the patronage of billionaire inventor Elon Musk, who still wants to be involved in and continue memorandum
Those in the crypto community have frequently criticized such coins, believing that they jeopardize the industry’s reputation as a whole.
Shiba Inu’s price plummeted by almost 30% immediately after the donation was made public. Coingecko estimated that 50 trillion SHIB, the number of coins contributed by Buterin, was worth $989 million at the time of publication.
Buterin, a Russian-Canadian programmer best known for creating the Ethereum blockchain project in 2015, also co-founded the Bitcoin Magazine, one of the first publications to cover cryptocurrencies in the world. When the price of Ether (the cryptocurrency built on the Ethereum blockchain) hit $3,000 on May 10th, according to public records, Buterin’s net worth was about $21 billion.
Rallies in meme-based cryptocurrencies like Shiba Inu, which were given to him when they were created, boosted his net worth even more. According to the white paper, 50 per cent of the Shiba Inu (another Ethereum-based coin) supply was moved to Buterin’s public wallet when the coin was developed to generate a “factor of scarcity.”

Buterin reportedly re-gifted these Shiba Inu coins to the India Covid Crypto Relief Fund, according to crypto observers. Nailwal thanked Buterin on Twitter and reassured SHIB holders that the relief fund will treat the donation responsibly. We will not do anything that will harm any group, especially the SHIB retail community. We’ll be responsible! SHIB holders, don’t be concerned, he tweeted. Since it already owns a large portion of the coins, the fund would have to be careful about trading them. The fund will be in charge of translating these assets into fiat currency and transferring them to the appropriate organizations.
The India Covid Relief Fund, according to Nailwal, has established an entity in the United Arab Emirates (UAE) to turn the currency into fiat currency. This body translates the currency at different exchanges before depositing it in a bank account outside of the region. The funds are then distributed to non-governmental organizations (NGOs) in India that are complying with the Foreign Contribution (Regulation) Amendment Act (FCRA), which will monitor disbursement.
The fund’s net valuation would be determined by the price of cryptocurrencies at any specific period. Donations have been made in Ethereum, Bitcoin, Ripple, Litecoin, Dogecoin, among other cryptocurrencies, according to public details on the fund’s platform.
Ethereum is open access for anyone – regardless of background or location to digital money and data-friendly resources. Behind the blockchain ether (ETH) is a community-based technology, with thousands of apps that you may use.
Ethereum applications are driven by ether, a platform-specific cryptographic token. Ethereum held a pre-sale for ether in 2014, which attracted a tremendous amount of interest. Ether acts as a mode of transportation on the Ethereum network, which is mostly pursued by developers seeking to create and run applications on the platform. Ether has two purposes: it is exchanged on cryptocurrency exchanges as most cryptocurrencies, and it is used by Ethereum to run apps and also monetize work.
One of the big Ethereum projects is Microsoft’s partnership with ConsenSys, which offers Ethereum Blockchain as a Service (EBaaS) on Microsoft Azure so that Enterprise customers and developers can provide a single click cloud-based blockchain developer ecosystem.
After a malicious attacker robbed more than $50 million worth of funds collected on the DAO (decentralised autonomous Organisation), a series of smart contracts derived from Ethereum’s computing base, Ethereum was divided into two blockchains, Ethereum and Ethereum Classic, in 2016. The new Ethereum was created as a hard fork from the original program, with the aim of preventing future ransomware attacks. Ethereum was the second-largest virtual currency on the market in May 2021, behind only Bitcoin. Ether currency is much easier to obtain than bitcoin (approximately 14- or 15-seconds vs bitcoin’s near-uniform 10 minutes), and there are far more ether units in circulation than bitcoin.
India is set to pass laws banning cryptocurrencies and replacing them with a central bank-backed digital currency.