Ola:Today we will be talking about an introduction of something new which has been appreciated and highly recognized, which is the employment of women. Today, even in the 21st century, in many areas of the country, women are given no encouragement to go out work.

They are still expected of their traditional roles, which is to stay at homes, cook food for the family, and look after their husbands and kids. They are still not allowed to have their financial independence. Ola electric Futurefactory has done something different,something which needs to be learnt by other businesses around.

Ola Electric Futurefactory, which is set to become the largest of its type in the world, will be run totally by 10,000 women. This announcement bringing in and promoting women empowerment has been made on September 13, 2021 by the Group CEO and the co-fouder of Ola Electric Futurefactory, Bhavish Aggarwal. The e-factory has the aim to build around 10 million two wheelers every year, or around 15% of the e-scooters of the world by 2022.

The first group of workers have started operating and wil cost USD 330 million to complete. The goal of the factory is to eventually have a full lineup of electric vehicles including three- wheelers and cars.

The inaugural S1 scooter of Ola will be of the price INR 99,999 which is almost equivalent to USD 1360, in order to have a competition with the traditional existing two-wheelers in the country. It is also expected that the exports of the two-wheelers will be started later in this year.

Bhavish Agarwal made a quote on a twitter, “An Atmanirbhar Bharat requires Aatmanirbhar women”, where further he said that he was proud to announce that Ola Futurefactory will be run completely by women. He said that they have welcomed the first batch this week and at full capacity.

He further told that Futurefactory will employ more than 10,000 women, hence making it the world’s largest women-only factory and the only all-women automotive manufacturing facility in the world.

Further he even added that this initiative is being taken to create an all inclusive workforce in Ola and do its bit in providing economic opportunities for women.

He said that huge investments have been made to train and upskill women in core manufacturing skills, and these women will be responsible for the entire production of every vehicle manufactured at Ola Futurefactory.

He further added the advantages of employing women in the factory- It not only improves their lives, but also of the people around them like their families and communities.

He further added about the increase in GDP which would happen when women are given employment by telling the statistics. According to him, the GDP of India would increase by 27% if the women are given equal importance in the labor workforce.

He said that to achieve this active and conscious efforts are required, especially in the manufacturing sector where participation is low at around 12%. He further commented that if there are plans to make India the manufacturing hub of the world, priority must be given to upskilling and generating employment for women workforce.

Headquartered in Bengaluru, Ola Electric Mobility is an Indian electric two wheeler manufacturer. Founded by Bahvish Aggarwal, Ola Electric factory is a 500 acre fully automated factory which is located in Pochampalli town in the Krishnagiri district of Tamil Nadu. The claims made by the company makes it the largest two wheeler factory in the world having an annual production capacity of 10 million units.

The important events of Ola Electric has been as follows-
In July 2019, it has raised USD 250 million from SoftBank during Series B round of funding. This lead to the value of the startup be more than USD 1 billion.
On May 27, 2020, Ola Electric acquired Etergo, which is an Amsterdam based EV Startup.

This was done to launch its own line of scooters in the year 2020.
In December 2020, an announcement was made by the startup which said that the startup will be setting up a manufacturing plant in Tamil Nadu, and the cost to be incurred in the project is INR 2400 crore, which is equivalent to USD 340 million.
In January 2021,the 500 acre land was acquired in Pochampalli.
In late February, the construction work began in the factory

Born in 1985, Bhavish Aggarwal is the co-founder and the CEO of Ola Cabs. He has done in Btech in Computer Science from Indian Institute of Technology, Bombay. Post his graduation in engineering, he was a research intern at Microsoft Research India, and later was the Assistant Researcher. In January 2011, he founded Ola Cabs along with Ankit Bhati in Bengaluru. 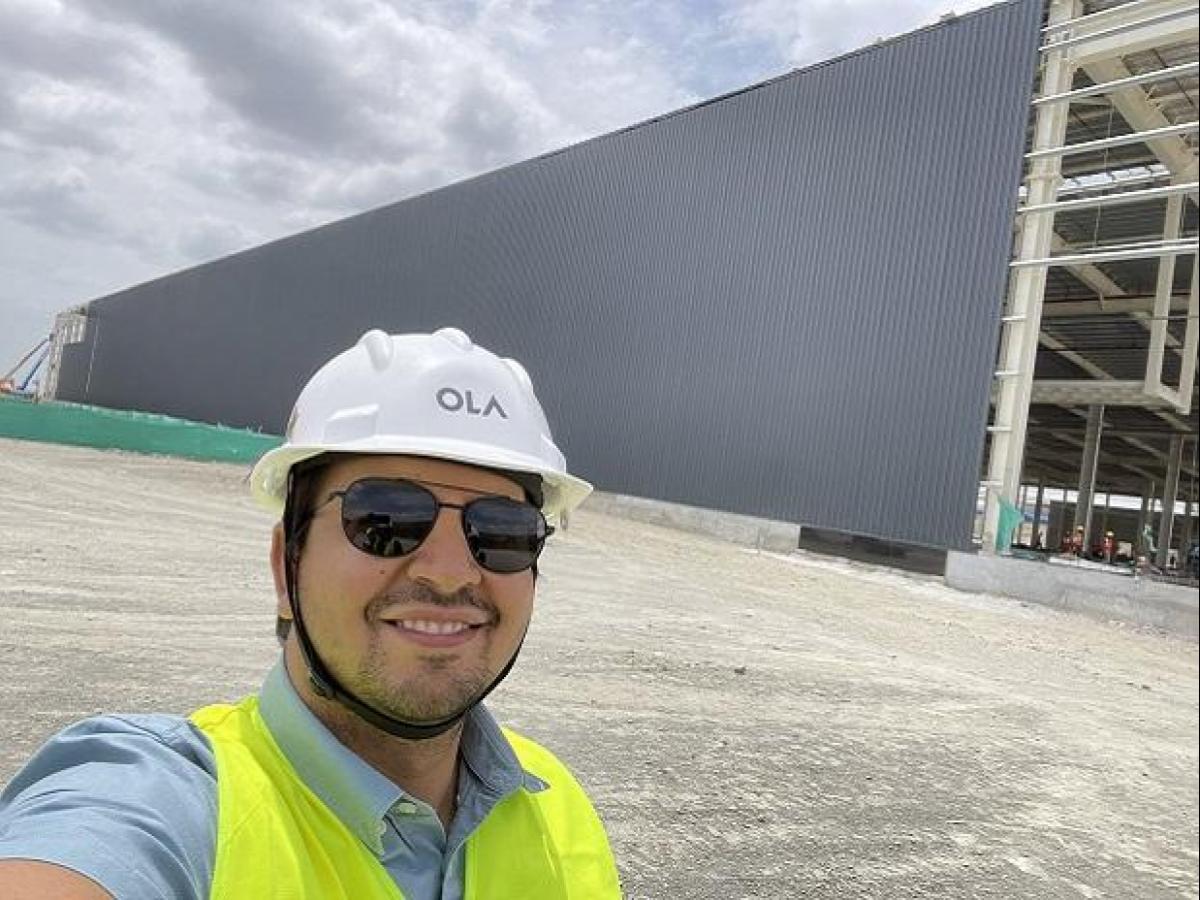 The idea of this startup came when Bhavish Aggarwal had a bad experience with a taxi. This experience led him to Ankit Bhati, and they both together founded Ola Cabs.Bhavish Aggarwal has been awarded ET Awards, Richest of the Year 2017. In the year 2018, Bhavish has been included in the Time magazine’s 1000 Most Influential People of 2018.

What has been said about the announcement ?

Bhavish Aggarwal, the co-founder and the CEO of Ola Cabs, and Ola Futurefactory made a statement saying that Ola Future Factory is a one step ahead towards the vision of the startup which is to make sure that the future of the world is clean mobility, carbon-negative footprint, and an inclusive workforce.

He further added that the startup will continue taking steps that will make sure that they are closer in achieving each of the goals and will keep on encouraging others to join, so that they can all together accelerate and increase the progress of the country.

This move is somewhere really encouraging and it should be appreciated and applauded. It has become like a role model to which other companies should look upto because women employment in today’s world has become a need and a necessity.

See also  Electric Vehicles Are The Future Of India, Vivek Wadhwa Is 99% Sure Of This

Do you wonder which 2 confidential bank details are strongly needed to receive money?