Formula 1 (F1) has grown its worldwide audience from 83 million on average per race in 2014 to 87.4 million on average by 2020. Despite the risks of the pandemic, the first race of 2021 in Bahrain started to smooth the records of the Sky and the ESPN networks. For decades, supporters have urged the sport’s governing body, the Fédération Internationale de I’Automobile (FIA), to do more to mitigate climate change’s consequences. However, it seemed that the event, fuelled by its millennial fan base, had eventually hit its reckoning when six-time world champion Lewis Hamilton openly voiced his reservations about the subject in 2019. The FIA declared its intention to make F1 carbon-free by 2030 and to provide healthy races by 2025 in November of that year.
What is the current carbon footprint of Formula One?
According to an FIA audit, F1’s driving operations emit nearly 256,000 tonnes of carbon dioxide per year, which is enough to fuel about 30,000 homes in the United Kingdom (UK) over the same time span. The key problem is not the vehicles themselves, which accounted for just 0.7 per cent of emissions from sports in 2019, but the transport teams and equipment logistics worldwide. In 2019, 45% of F1’s pollution from corporate travel for teams represented by path, sea or air logistics for equipment carriage, had an additional 27.7%. Completion of the list includes 19.3% of emissions, manufacturers and buildings that serve sports, as well as 7.3% of events.
Worryingly, the 256,000 tonnes emission figure does not account for the influence of race fans, who number in the millions and need transportation and lodging during and around the race weekend. The overall carbon footprint from F1 catapults will include the emissions emitted by the fans at around 1.9 million tons of C02 produced annually by this sport. 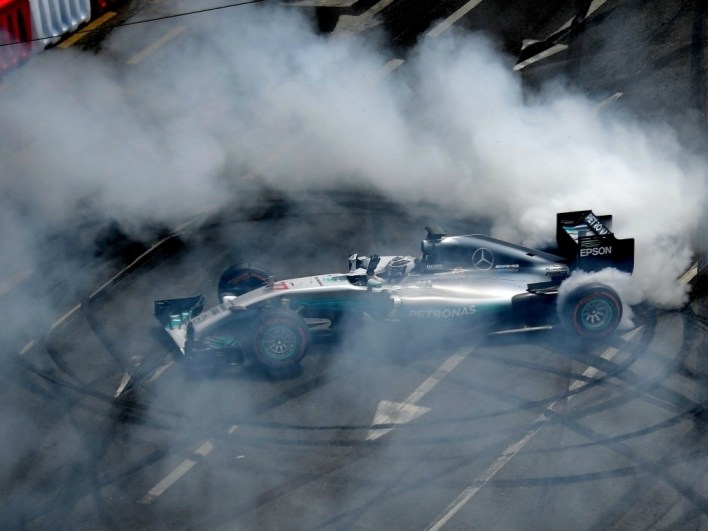 The path to the sustainable development of Formula 1
Formula 1 is also tied to technical advances so no team can stay successful without substantial year-over-year changes in its engine. Many fuel-saving modules that are a hallmark of the new hybrid engines have been developed by the F1 teams. The combustion of more fuel produces more power in typical internal combustion engines (ICEs). However, in F1, the fuel flow in each car is limited to the same value and the weight of the car is lower. To increase the car’s efficiency, manufacturers must therefore find ways of burning fuel more efficiently and therefore minimize weight and optimize power.
The expression ‘thermal efficiency’ is used in automobiles to describe motor performance. It refers to the percentage of combustion energy that drives the car’s movement, rather than heat loss. In 2014, when F1 was changed from V8 to V6, thermal efficiency rose from 29% to 40%, an important change that reduced sports wide fuel consumption. Thermal efficiency is the main cause for the change. Despite these changes, F1 teams were unable to allow themselves to be complacent. Today the thermal efficiency of F1 vehicles is 50%, making them more powerful than any other on-road vehicle. These advances in technology also lead to routine production. F1 teams already have a long track record of technology development which was later used for commercial production. Aerofoil Energy announced in 2020 that it would release its Vortex band patent, a technology that does not allow cold spillage from open-screen coolers. Energy savings have doubled in retail chains, where these bands are added and are poised to become a cornerstone for cooling production. Initially developed for the ‘wings’ in F1 vehicles, this technology is one of several developments that has had a positive effect on other goods and sectors.
In 2020, Formula E was also the first sport to achieve a net-zero carbon footprint from its inception through investments in programs aimed at offsetting electric energy emissions during the six-season racing seasons. To hit this goal, they have thoroughly tracked their carbon footprint, improved transport and storage and cut down on-site all plastics.
The Carbon Neutral Plan of 2030
The continued development of energy-efficient engines is one of the most advanced ways F1 expects to reduce its environmental effects. From the beginning of 1989, when the FIA Alternative Fuel Commission was established, F1 pledged many efforts to increase engine performance, with its global fuel economy in 2007 becoming the most notable initiative aimed at reducing the fuel consumption in the competition by 50%. In 2020, FIA announced that 100% renewable fuel has been produced and that engine producers are still researching it with the aim of using it before 2026. The third generation and most innovative version of biofuels, usually produced from by-products of industrial or agricultural waste, is virtually 100% organic. F1 vehicles use biofuels now, but the new rules require just 5.75 per cent of organic components to be petrol. This figure will grow to 10% by 2025, and by the year 2025, the FIA plans to move towards 100 per cent advanced renewable fuel as new power units are proposed for competition. However, in terms of net reductions in sport, transport and infrastructure are the main improvements. In this connection, the FIA has committed itself to make travel and logistics “ultra-efficient” and 100% of its offices, facilities and factories renewable. Both race day activities are to be 100% renewable by 2025, recycling, reusing or composting all waste.

See also  The climate crisis affects people with disabilities in unusual ways. Why?

What Has Government Learnt From Last Year Lockdown & Pandemic Crisis? Why Government is still not prepared to even after being hit once by this pandemic?