Japan marked the 75th anniversary of the world’s first atomic bombing in Hiroshima. Over one thousand people including survivors and politicians attended the ceremony. The participants observed a minute of silence at 8.15 am, the exact moment the US dropped the bomb on Hiroshima on the 6th of August 1945 during the final stages of the second world war. This was followed by another bombing on Nagasaki on the 9th of August. The ceremony which was held at the Hiroshima peace memorial park was presided over by Prime Minister Shinzo Abe. The Japanese Prime Minister said that the country remained committed to its non-nuclear pledge. However, Tokyo is yet to sign the nuclear weapons ban treaty. As mourning, dozens of people visited the cenotaph for the atomic bomb victims which holds the names of those who lost their lives to the bomb. Visitors included survivors and their relatives. This is a very somber occasion and there are a lot of people who are upset that they can’t go to Hiroshima to observe the occasion due to surging in COVID-19 numbers. There were fewer visitors than usual for this time of year in Hiroshima. We can observe a lot of visitors from overseas and outside of Hiroshima, from Tokyo, from other parts of Japan, coming to observe this day but this year it’s very much torn down. This has been frustrating for many survivors who tell that they feel they are running out is time to share their stories because usually, this time of year is when they can do so with a very large audience. Survivors of Hiroshima bomb are distressed seeing many suffer during the pandemic, witnessing the death of people once again bring backs the memories from what happened in Hiroshima 75 years ago. So this is a very sensitive time for everyone there.

75th anniversary of the atomic bombing also comes at a time when the country had remained committed to its non-nuclear pledge although it’s yet to sign the nuclear weapons ban treaty. Now, Japan is rethinking its pacifist pledge and it seems like PM Shinzo wants to change the constitution for that purpose. This is precisely the reason why several survivors and their families didn’t want PM Shinzo Abe to attend that ceremony. They have been at odds with the Prime Minister, some survivors saying it feels like he just doesn’t care about the survivors by not signing that treaty and, of course, his stance moving japan towards a less peaceful direction. So that remains a point of tension and survivors are increasingly hoping that people don’t forget about them, don’t forget about what happened in Hiroshima 75 years ago and the effect of a bombing like that in Hiroshima. Cancer risk for survivors increases every single year so they are still living with that burden until this day as they observed 75 years since that bombing. 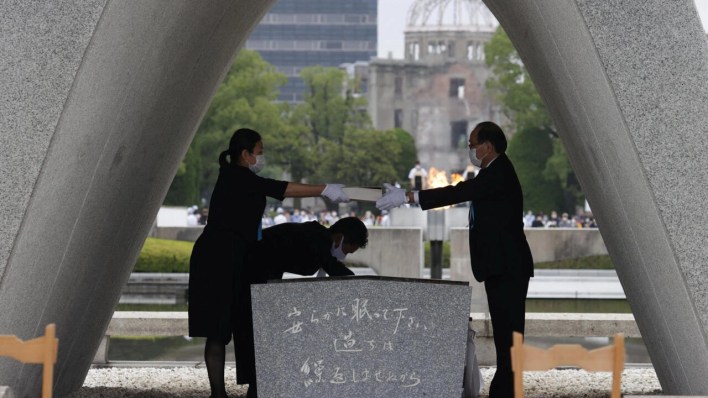 From the visuals, we can see that at the Hiroshima peace park memorial, strict social distancing was maintained even as the 75th anniversary was observed. Social distancing was an important thing as everybody in Hiroshima was wearing masks and they have been very respectful about making sure the survivors feel safe while attending the very few memorial events that are still planned for this week. Now, many of those events have been canceled including some of the most iconic ones with candlelit vigils and the paper lantern that they usually have every year. Those have all been canceled and they want to make sure that people don’t flock to Hiroshima at a time where there is a surge of COVID-19 cases across Japan. Hiroshima so far hasn’t been too bad but Tokyo has been the hotspots and people from across Japan are hoping that domestic travel eases up of slow down a little bit so that the spread can stop.

Has the destruction, massacre, and the lesson forgotten?

We are living in the 75th year since the world’s first atomic bomb on Hiroshima took place. Has the world learned any lessons? One of the biggest threats to humanity will always remain the subtle nuclear war. The world is on a brink of change. 30 years ago the cold war ended with the US and Russia agreeing to reduce their nuclear arsenal by 90 percent. But we are witnessing the discarding of those agreements one by one. China is scaling up it’s a small nuclear arsenal while the US and Russia are modernizing theirs by adding a host of new warheads pushing the non-nuclear countries in threat. The 1968 treaty on the nonproliferation of nuclear weapons allows nuclear powers of the US, Britain, China, France, and Russia to be maintained nuclear weapons. But that was in exchange for a promise of total nuclear disarmament. Other nuclear powers- India, Israel, and Pakistan have not signed the treaty. The well known former signatory of this treat- North Korea, broke away and developed nuclear warheads. The failure of this treaty led to another treaty in 2017- it prohibits nuclear weapons also known as the ban treaty. It bans building, possessing, and testing of nuclear weapons.

So far only 40 countries have signed it and the result is this- the world has 13, 410 nuclear weapons. These are not the only treaties that have been discarded. The Trump administration had pulled out of Iran nuclear deal in 2018. The intermediate-range nuclear forces treaty was also one of the treaties that the US government broke out of. Now there is a fear that the new strategic arms reduction treaty with Russia may fail if China remains adamant about not joining it. This is a dangerous trend. America, Russia, and China hold more than 90 percent of the world’s nuclear arsenal. That’s not all. Technology had brought in a new threat. Faster missiles, cyber warfare, and Artificial intelligence. There was an incident where the US and Israel have targeted Iran’s nuclear program with a computer worm. Russian hackers have probed US nuclear plants and Chinese hackers have conducted cyber espionage on the US military. The use of Artificial Intelligence increases the prospect of accidents and the unintentional use of nuclear weapons.

“Nuclear weapons aren’t gone, nuclear weapons that made us suffer for decades still exists, so to me, the war isn’t over.” -Survivor.

75 years ago, the world’s first atomic bomb was dropped on Hiroshima in Japan. It killed one lakh forty thousand people, turning the city to ashes. 75 years on and nuclear treaties are being discarded. The threat is greater than ever. Technology like artificial intelligence is controlling nuclear sites. Has the world really learned any lessons? It has not. 13,000 nuclear warheads exist in our world. That’s 13,000 mistakes waiting to happen. A mistake can be made by an automated system and that mistake can wipe out the world. One mistake, human or otherwise could raise out the world.

The Aftermath of Beirut Explosion: "This chaos is worse than war."