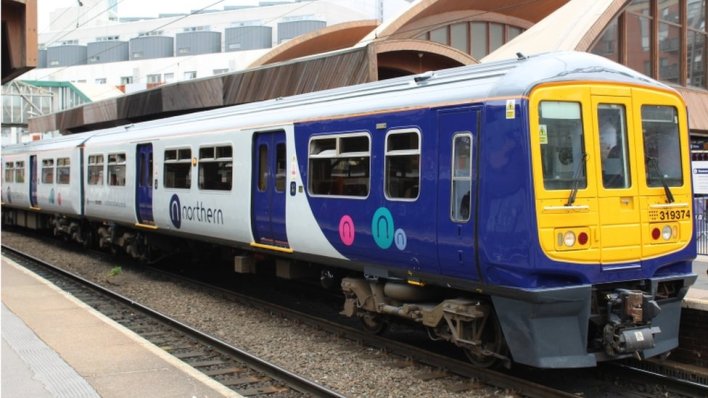 Northern scrapped 168 services per day last month to try to relieve chaos caused by the timetable’s initial introduction in May.
Services in Manchester, Merseyside and Lancashire are partially resuming while all trains on the Lakes Line in Cumbria are being reinstated by Northern.
The remaining 25% of its cancelled trains do not restart until September.

Thousands of passengers have applied for compensation from Northern, which made the first pay-outs last week.
The company, which has faced calls for it to be stripped of its franchise, says a “more gradual” reintroduction of its timetable will ensure a more stable and reliable service.
David Brown, managing director at Northern, said the cancellations since 4 June had been an attempt to alleviate “significant disruption” caused by the nationwide introduction of the new timetable in May.
He added: “Whilst we are ready to reintroduce all 168 daily services, given the need to drive further improvements across Manchester, we have agreed to a more gradual reintroduction of our services.
“A phased introduction is the right approach to ensure a more stable and reliable service for customers.”

Services being reintroduced on Monday:

See also  Why has the government put the Dalit activist Nodeep Kaur behind the bars?

However, some passengers were still encountering delays and cancellations earlier.
David Jenkins tweeted: “First train for 2 months and they cancel it two mins after it’s meant to arrive.”

On Preston station this morning there was some scepticism among delay-weary travellers as to whether Northern has finally sorted things out.
One frustrated commuter told us her train from Lytham never materialised adding: “First day of the new timetable and it’s out of the window.”
Indeed the departure boards did show a number of cancellations and delays, though not nearly as many as in previous weeks.
Another traveller told us hopefully: “Maybe the recent trouble has just been a blip.”

Greater Manchester Mayor Andy Burnham has written to the prime minister, asking her to personally intervene over the “chaos” caused by Northern this summer.
He said: “People could have legitimately expected, when fewer trains were running, that at least the ones that were running would be on time, well they haven’t been. The emergency timetable didn’t solve anything.
“And then on Saturday night, nine o’clock an email lands saying Northern will cancel 47 services tomorrow so we can get trains in the right place for Monday morning.
“Even if trains do run better today it’s because there were no services yesterday.
“Speak to any commuter in the north west of England and they will tell you that Northern services were poor for a long time before the new timetable came in and they haven’t got much better in the two months since.”

A government spokesman said: “The Rail North Partnership has accepted the rail industry’s recommendation to phase in services from Monday when 75% of the Northern train services removed during the interim timetable will be reintroduced.
“This is in addition to further adjustments to timetables to improve reliability, so that passengers can better plan ahead.”
He added that Mr Burnham sits on the board of Transport for the North “which jointly manages the Northern franchise through the Rail North Partnership”.

In May, what was billed as the biggest ever overhaul of rail timetables led to significant and widespread rail disruption.
The timetable overhaul – for Northern as well as Govia Thameslink Railway (GTR) lines – was aimed at improving punctuality and boosting capacity, but instead led to a huge number of train services being cancelled or severely delayed.
Northern and GTR had to remove hundreds of trains in a temporary timetable change to deal with the chaos on the rail network.

Services to be reintroduced in September:

Last month, Transport Secretary Chris Grayling defended his handling of the saga and announced an inquiry into what went wrong.
The inquiry, by transport professor Stephen Glaister, will look at the implementation of the new timetable. A final report will be published by December.
The Transport Select Committee is also asking for evidence from passengers and as well as rail industry groups.
Train timetables are usually changed twice a year, in summer and winter, but normally on a much smaller scale.
A rail timetable overhaul planned for December has since been scaled back amid fears of a repeat of the chaos seen in May.

Has your journey improved, remained the same or got worse on Northern rail? Share your stories. Email haveyoursay@bbc.co.uk.
Please include a contact number if you are willing to speak to a BBC journalist. You can also contact us in the following ways:

See also  After 400 years, the Queen finally makes her way back home