Prime Minister Narendra Modi will hold an election rally in Puducherry on Tuesday to seek support for the new development area of the Union territory for the parliamentary poll next month.

This is the second time the Prime Minister will visit Puducherry to run for the campaign of the NDA candidate. Prior to this, he held a public opinion meeting on February 25th after the announcement of several centrally-sponsored development projects on the same day. According to the PTI report, Prime Minister Modi will speak at the rally held at AFT Thidal.

AINRC, which is in charge of Puducherry NDA, is competed in 16 of the 30 constituencies, while BJP is seeking to choose from 9 seats, and AIADMK is elected from 5 seats.

The 30-assembly seat election for Puducherry will be held in stages on April 6.

Of the 30 parliamentary seats, five are reserved for scheduled caste candidates. As many as 10,02,590 voters will choose Puducherry’s candidates for the 15th Legislative Assembly.

The poll manifesto of BJP(Narendra Modi) for Puducherry

BJP issued Puducherry’s declaration of public opinion, which promised to create 250,000 new jobs for youth, provide financial aid of 6,000 rupees to all fishermen each year, and provide free scooty for girls who pursue higher education if elected for federal power territory.

BJP also pledged to provide farmers with an additional subsidy of 2,000 rupees under the PM KISAN scheme, launch Puducherry’s 5-year water security plan, and establish an integrated cattle development center under the leadership of the Rashtriya Gokul Mission. 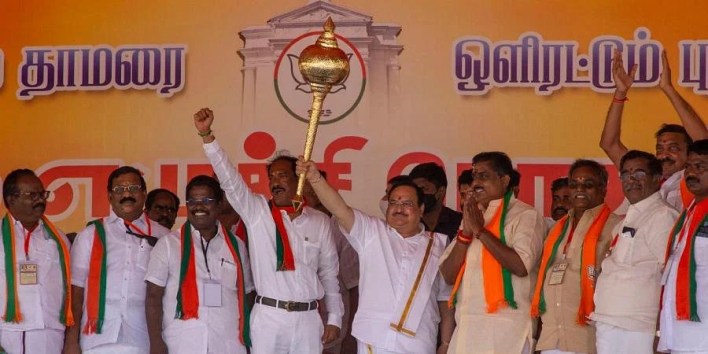 For fishermen, BJP promised to provide Mudra loans to street vendors and fishermen’s wives who are prohibited from fishing, increase the “off-season” subsidy from 5,000 rupees to 8,000 rupees during the closed fishing period, and provide subsidies for fiber boats, diesel oil, and cold storage.

BJP also pledged to formulate new industrial and investment policies, including a comprehensive framework of incentives and subsidies, to create a safe, predictable and conducive environment for companies to do business, and to launch the Global Investment Puducherry Summit within the first year of the formation of the government.

The manifesto also mentions the establishment of a new Puducherry Finance Company (PFC) to cater to start-ups, MSMEs, SHG, fishermen’s cooperatives, artisans, etc., as well as a Mega Textile Park with all comprehensive facilities and fast turnaround time to reduce transportation losses.

BJP also promised to establish a Puducherry Education Board which will also conduct Xth and XIIth board examinations for UT students.

According to the declaration, if the BJP Party is elected, it will eliminate all encroachment on temple land and set up a special temple repair fund to renovate and repair temples. 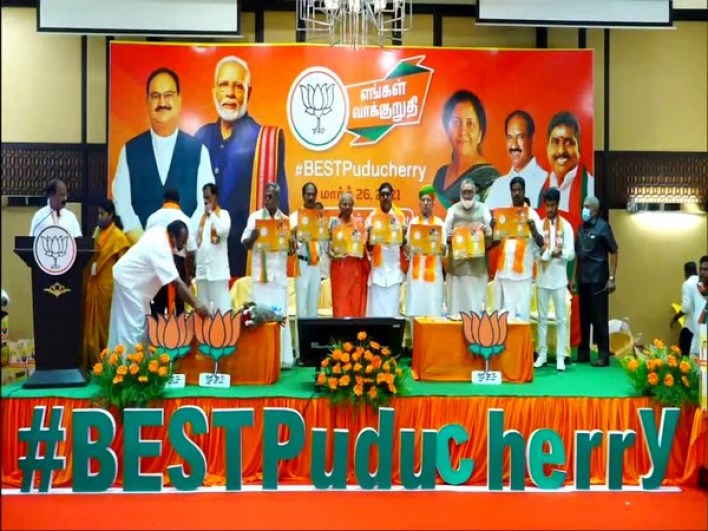 The BJP also promised to create a Puducherry Fund for start-ups to provide subsidized loans up to 2.5 million rupees to start-ups.

The party stated that once it is elected to power, it will reserve 30% of the reservations for Purduecherry University students in the private and government colleges, and all government job vacancies will be made.

To establish a community sports center, a public gymnasium will be established in each constituency, and the manifesto will be read.

BJP promises to ensure that 50% of female employees in all government and public sector agencies, (women-run SHG up to 500,000 rupees interest-free loans), reserve 50% of rights and interests for women in local body elections, and free sanitary napkin vending machines in all public places, colleges, Anganwadis, schools, and PDS stores.

While Congress formed an alliance with the DMK to fight the polls, the opposition coalition consisted of the All India NR Congress, BJP, and AIADMK.