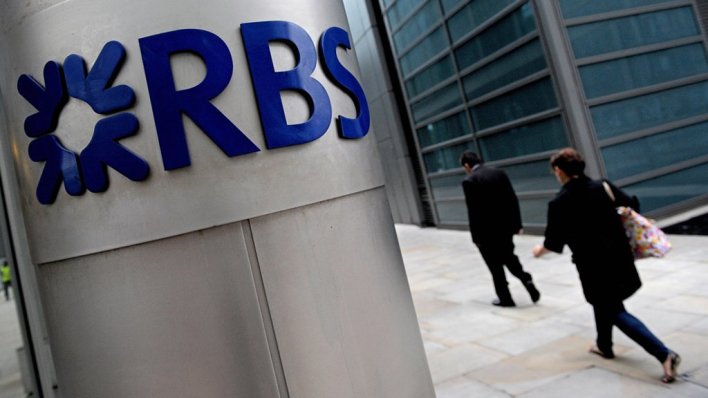 Royal Bank of Scotland has seen first-half profits fall, but is on course to pay its first dividend in 10 years.

The bank said it would be paying 2p a share as an interim dividend as soon as its $4.9bn (£3.8bn) settlement with the US Department of Justice over mortgage-backed securities was completed.
The cost of the settlement meant that RBS banked lower profits for the January-to-June period than in 2017.
Attributable profit was £888m, compared with £939m in 2017.
RBS booked a £1bn charge to deal with the settlement with US regulators, which was agreed in May. It relates to RBS’s mis-selling of the securities in the run-up to the financial crisis.
The bank had already put aside money to cover the rest of the cost.
It said it expected the deal with the Department of Justice to be finalised within months, paving the way for the dividend to be paid out.

RBS was bailed out by the government at the height of the financial crisis and is still 62.4% publicly owned.
Last month, the government lost £2.1bn after selling a tranche of RBS shares at 271p each, almost half the 502p a share it paid for them in 2008.
Announcing the half-year results, RBS chief executive Ross McEwan said the bank was pleased with its progress, although the environment was uncertain and highly competitive.
He added: “We still have a lot more to do to achieve our ambition of being the best bank for customers in the UK and Republic of Ireland.
“However, with our major legacy issues largely behind us, we are able to fully focus on closing this gap.”

The script was supposed to go like this – RBS settles with the Department of Justice removing a massive cloud of uncertainty, the bank resumes paying dividends, and the government starts selling off its stake.
Then – hey presto – a profitable and income-generating bank combined with dwindling government involvement leads to the share price going up.
In fact, shares have come down quite significantly. How come? According to chief executive Ross McEwan it is because of Brexit.
“There definitely is a Brexit discount on companies that have a strong UK focus like ourselves,” he says. “You’ve also got to remember that we are seeing some of the weakest economic growth in recent years, so we are preparing ourselves for a no-deal scenario and a very slow time in 2019, which we obviously hope doesn’t happen.”
RBS is not the only bank whose shares are suffering a Brexit discount. Lloyds has paid off the government in full, is generating very solid profits and paying handsome dividends, yet its share price is down more than 10% since the start of the year.

Shares in RBS rose 2.5% in early trade to 256p, although they remain below the highest price reached this year, which was 302p in January.
Nicholas Hyett, equity analyst at Hargreaves Lansdown, said RBS’s latest results were “pleasantly positive at pretty much every level”.
However, he added that investors “should keep half an eye on the challenges ahead”.
“Net interest margins are under pressure as competition rises, and there’s still the issue of the government’s 62% stake to be dealt with.”
RBS made no new provision to cover the cost of payment protection insurance (PPI) mis-selling claims in its latest results. UK banks have set aside tens of billions of pounds to address what has become the biggest compensation exercise in UK financial history.
The bank said it had no further comment to make on the activities of its controversial Global Restructuring Group (GRG), which has been widely criticised over its treatment of small and medium-sized business customers.
Earlier this week, the Financial Conduct Authority said no action would be taken against RBS over the issue.
Source: BBC

See also  With Winter Around The Corner, Scientist Fears An Escalation In The Spread Of The Virus. Is the World Ready To Face A Second Wave?